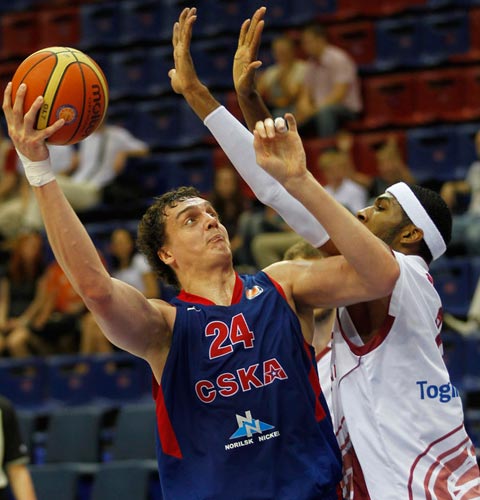 On Saturday Zalgiris Kaunas will take their 2-0 record on the road for Game 3 against Nizhny Novgorod, and Lokomotiv Kuban will look to close out Unics Kazan after Kuban took the first two games on the road.

CSKA Moscow – Krasnye Krylia Samara, 87:78
CSKA Moscow took another step towards advancing in the VTB United playoffs with an 87:78 win, giving them a 2-0 advantage over Krasnye as the series shifts to the Sports Palace in Samara, Russia. According to CSKA coach Ettore Messina many of his guys have still not recovered from CSKA’s early exit (and a big loss) from the Euroleague Final Four at the hands of Olympiacos, the eventual champions and the same club that defeated CSKA in last year’s finals.

We won a very important game thanks to the efforts of part of our team. Unfortunately, several guys haven’t recovered yet psychologically from the Final Four. We need to stop feeling sorry for ourselves and get back to playing our own basketball, starting with the next game in Samara.
–CSKA head coach Ettore Messina

In this relatively tight game, the key stat from the contest was CSKA outshooting Krasnye from beyond the arc as the Army Men connected on 7 of 18 (39%), compared to 4 of 15 (27%) from their visitors. CSKA also got 35 points from their bench, compared to only 23 from Krylia.

The guests got up 0:5, then a lay-up and a Sonny Weems triple knotted the score at 5. Chester Simmons hit a jumper for his first of a game-high 22 points, to give Krylia a 5:7 lead, but a Victor Khryapa three-point play would give CSKA an 8:7 lead. That was the last time the guests would see a bigger number on their side of the scoreboard as the home club led the game the rest of the way, including building a lead as high as 18. It was also the start to an 11:0 run that would give the hosts a 16:7 lead before Aaron Miles would drop in a lay-up to stop the run. At the end of the quarter CSKA had kept the advantage, coming out with a 29:21 lead.

Four minutes into the second frame Krasnye was able to cut the lead to five getting a jumper from Omar Thomas and free throw to complete the three-point play, then getting a split on a pair of free throws from Victor Zaryazhko, bringing the score to 34:29. CSKA didn’t let that last long though as they went on a 7:2 run immediately after, to extend their margin back to 10, 41:31. Theodoros Papaloukas hit a pair of singles and Nenad Krstic dropped in a lay-up, which was followed-up by Andrey Vorontsevich splitting a pair of charity tosses, giving the hosts their biggest lead of the half at 13, 46:33, with a minute and a half before the mid-game break. Simmons did what he could to get his club back in the game, knocking down a triple shortly after connecting on a lay-up, cutting the gap to eight, 46:38. With three seconds on the clock, Papaloukas sank two freebies to send the teams to their intermission with CSKA up 10, 48:38.

Aaron Jackson got a lay-up and then a pair of free throws after an Evvgeny Kolesnikov technical foul, then Khryapa dropped in a jumper on the possession after the technical, giving CSKA a 15-point advantage, 55:40. Simmons knocked down a pair of singles, then Krstic hit a pair and Evgeniy Voronov hit the cords with a three-ball to extend the lead to 17, 64:47. The clubs prepared for the final frame with CSKA up 64:48 after Zaryazhko split a pair of free throws.

The first two minutes of the fourth quarter was a flurry of scoring with each club scoring multiple times, bringing the score to 70:55. Voronov knocked down a long-ball to give CSKA the largest advantage of the day at 18 points, 73:55. Andre Smith hit a pair of free throws and then a triple, followed-up by a pair of singles by Miles that cut the gap to 11, 73:62, with just over four minutes to play. After Jackson and Yury Vasilliev traded deuces, Vladimir Micov knocked down two three-pointers around a Simmons jumper to extend the hosts’ lead to 15, 81:66. With a just over a minute to play Krylia called a time out with the score 87:72. After the break Simmons got an assist from Vasillev and threw down a dunk, then stole a bad Micov pass for a lay-up, and ended the contest with another fast-break lay-up to tally the final six points of the game and cut the margin to nine points, 87:78.

Despite the different score, today and yesterday’s games were quite similar. I’m uncomfortable for my team. Because of our limited selection of Russian players, it will be tough for us to battle CSKA in Game 3, especially since there’s very little time for adjustments. We’ll battle, though, for a win.
–Krasnye Krylia head coach Sergei Bazarevich

Khimki Moscow – VEF Riga, 103:82
Khimki started slow, but was able to build a lead that VEF Riga couldn’t counter and the Russian club improved to 2-0 in their best-of-five series with the Latvia club with a 103:82 win in Moscow. Game 3 will move to Riga on Sunday.

First of all, I’m very happy that we won and that we did it with style. The fans and the players had a good time tonight. There aren’t many games in a season when everyone is happy. Second, I’m happy that we got everyone playing time. The series ahead is long. If we can beat VEF then we’ll face the winner of CSKA – Krasnye Krylia in a few days. We may have been a bit lucky that VEF couldn’t bring its strongest lineup to Moscow. We saw excellent basketball today, especially from beyond the arc. We went 17-26 from long-range. The ball movement was good and everyone played for the team, not himself.
–Khimki head coach Rimas Kurtinaitis

Riga scored first, but it didn’t take Khimki long to counter and get out front. Vitaliy Fridzon and Sergey Monya tallied 12 of the first 15 points, with Zoran Planinic knocking down a triple early on. EJ Rowland and Will Daniels got VEF going with a pair of jumpers and a three-ball. The hosts ran off seven unanswered to build a 12-point lead and get up 24:12. They traded baskets for the last two minutes, sending the game to the second quarter with Khimki up 29:18.

Petteri Koponen opened the quarter with a triple to give the hosts a 14-point advantage. Riga cut the gap to 10 with consecutive fast-break lay-ups. Khimki built a 16-point lead with just under three minutes to play in the half, but five straight from the guests cut the lead to 11, which is where it stood as the final horn sounded on the first half, 47:36.

Khimki blew the game open to start the second half with two jumpers from Paul Davis and Monya, as well as a triple from Kelvin Rivers, to give the hosts an 18-point margin, 54:36. Lauris Blaus hit a jumper for VEF and Donatas Zavackas hit a triple to put a dent in the lead. Khimki ran off 12 straight to get up by 27, 68:41. Riga scored the final five points of the frame to cut the margin from the game-high difference of 28, to 23 heading into the fourth with the hosts up, 76:53.

During the final 10 Riga wasn’t able to mount any kind of a serious challenge and only cut the lead by two, giving Khimki Game 2 and a 2-0 with a 103:82 win.

I’d like to congratulate Khimki with an excellent win. Our opponent played well and deserved to win. In my opinion, Kurtinaitis’s team is playing very well this season and represented themselves well in the Euroleague, nearly advancing to the next round. To be honest, we didn’t have much of a chance today. Our weight divisions are a bit different. We did everything we could today. Maybe we could give Khimki a fight if we had our full roster, but I have to admit, the opposition is simply stronger than us. Tomorrow’s game remains and we’ll try to make adjustments and make fewer mistakes on defense and on offense.
–VEF head coach Ramunas Butautas