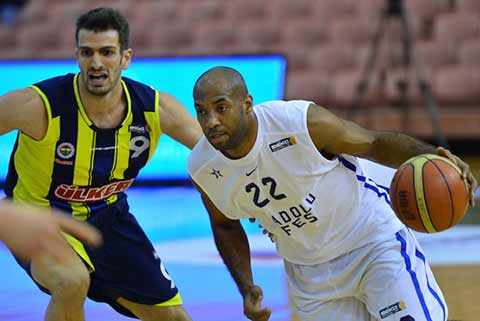 With the rest of the league having completed their Week 14 contests in the Turkey TBL already, cross-town (Istanbul) rivals Anadolu Efes and Fenerbahce Ulker were set to square off on Monday night to determine which of the clubs would sit on top of the TBL standings. Heading into the match Ulker sported a 12-1 record and were all alone with Efes at 11-2 and Banvit at 12-2, having already successfully picked up their 12th victory with a 95:100 road win over last place Antalya BSB on Saturday.

Fenerbahce was riding an eight game TBL winning streak, having lost their only league contest to Pinar Karslyaka on Nov. 11, 2012, while Anadolu Efes had won four straight with their most recent defeat being on Dec. 10, 2012 when TED Ankara Kolejliler beat them 86:85.

The hosts got the first advantage in the contest, closing out scoring in the first quarter up, 24:22.

In the second frame the West-side club ran off nine unanswered early on, getting a 36:27 lead, en route to a 41:33 score at the intermission.

Efes jumped out quickly in the fourth, doubling their advantage to 16 early on with a 14:6 scoring run to bring the tally to 74:58. The hosts pushed the margin to 20, 85:65, over the East-siders using the long-ball and some sharp defense and kept on the pressure to earn themselves a hard-fought 94:76 win and a share in a three-way tie at the top of the standings.

The win improves Anadolu Efes to 12-2, drops Fenerbahce to 12-2 and Banvit’s win Saturday also improved their mark to 12-2.

Semih Erden paced the way for Efes with 27 points, connecting on 10 of 12 (83.3%) from inside the arc, and six total rebounds. Aleksander Vujacic contributed 18 points, shooting four of four inside the arc and at the free throw line, and two of six from behind the arc.

Bojan Bogdanovic knocked down 17 for Fenerbahce and dished off six assists in the contest.