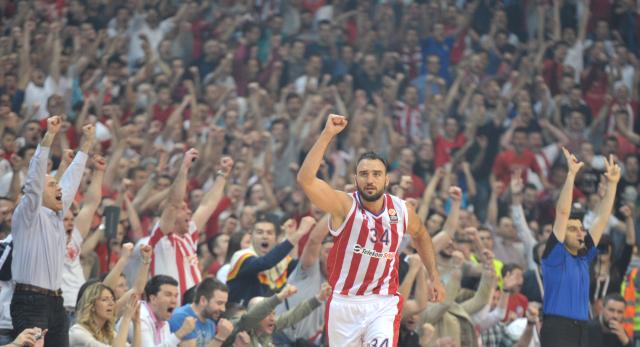 European Basketball fans will be thankful towards Red Star Belgrade as the club and its fans created one of the most memorable evenings ever. The Serbian powerhouse locked horns with Unics Kazan and defeated one of the competition favourites in Game 1 of the 2 series semi final.

While defeating one of the continent´s form teams was an amazing feat, the game in Belgrade will live long in the memory because of the fantastic support inside the Kombank Arena. Packed to the rafters seems a fitting way to describe the arena as a virtually unheard of 22,736 fans crammed inside to see their team in action. The result was one of the most raucous and loud crowds not only in Eurocup history, but in the annals of modern European Basketball.

The win fuelled the party mood inside the Kombank as fans celebrated an important milestone in the history of Red Star Belgrade. It was 40 years to the night since the club picked up its last and only European success, winning the Cup Winners Cup (now the Eurocup) in 1974.

Not only was the crowd massive, it also rocked the very foundations of the court as the Red Star fans showed the kind of devotion typically reserved for a rock concert. Some of Serbia´s great sporting hero´s were also in attendance, including world tennis number 1 Novak Djokovi, fresh from his win in the Miami Masters.

While waxing lyrical about the atmosphere is easy, there was also a stellar game of Basketball on the night as Crvena Zvezda beat the odds to win 63-52. The win was impressive considering Unics Kazan is one of the favoured teams for the tournament and one of the form teams in Europe. The Russian club had lost just two games leading into this encounter and looked to be in formidable touch. However, the Serbian hosts were in history making mood and surprised many by winning the game by 11 points at the final buzzer.

That is a nice cushion to take to Russia in a week´s time as Unics will surely seek to overturn the deficit with home court advantage. Despite the loss this week, Kazan will enter next week´s encounter as favourites.

First quarter
Andrew Goudelock has been a lynchpin in Kazan´s success of late and he opened the scoring to give the visitors a 0-2 lead. Goudelock struck again to personally sandwich a Jaka Blazic lay-up that got Belgrade on the board (2-4). Blazic scored again to tie the game and Boban Marjanovic went 50% from the charity strip to give the hosts their first lead of the clash (5-4). The teams traded the lead over the middle of the quarter, before Unics scored four consecutive points through Nikos Zisis and Ian Vougioukas (9-12). Blazic scored a free throw to cut it to two points, but Vougioukas dunked to give the visitors a four point lead at 10-14. Unics took control for the remainder of the period and led 15-18 after 10 minutes.

Second quarter
Crvena Zvezda opened the second quarter well and shut out Kazan for the first three minutes. In that time the Serbian team hit six points courtesy of lay-up baskets from DeMarcus Nelson, Rasko Katic, and Charles Jenkins. The confident 6-0 run kept the Kombank Arena shaking and gave Belgrade a 21-18 lead. Unics finally got on the board in the second from a Vladimir Veremeenko free throw, but Red Star´s ascent continued with the next four points scored by the hosts (25-19). Kazan needed a quick response and found it through a Goudelock triple (the first of the night) and two point effort. The teams exchanged scores for the next minutes, but the visitors reclaimed the lead when Kostas Kaimakoglou hit from downtown (28-29). Goudelock continued to pace Unics, sending the team to 28-31, but later in the period Blazic scored five points as the half ended to give Belgrade a 35-33 lead.

Third quarter
Blazic continued his scoring streak by opening the second half with an inside jumper, claiming the last seven points in the process (37-33). The Russian club grabbed the next four points to close the gap and tie the game at 37 apiece, and once again the teams traded (39-39). However, the home team was finding little streaks at the right time, and in the third frame Red Star hit 9 points without reply to open a 48-49 lead. Unics Kazan once again responded, this time through Tywain McKee with a triple followed by a lay-up and Chuck Edison with a score in the paint (48-46). The game was close but Crvena Zvezda scored the last four of the third to lead 50-48 after 30 minutes on the court.

Fourth quarter
Tadija Dragicevic and Jenkins struck from outside the arc and Katic scored two inside to extend Belgrade´s lead to open a double digit game (61-48). Just as important as the 11-0 run was the fact that the hosts shut out Unics for eight minutes of the final stanza and all but won the game in that time. The visitors responded at the net down the last minutes, but could only muster four points in the closing two minutes to leave much to do in Russia next week.

Blazic finished with 15 points for the winners, while Katic hit 14 points. Dragicevic had a double-double 10 points and 11 rebounds for Belgrade.

Goudelock once again stood out for a downed Unics Kazan, grabbing a game high 18 points in the losing effort.