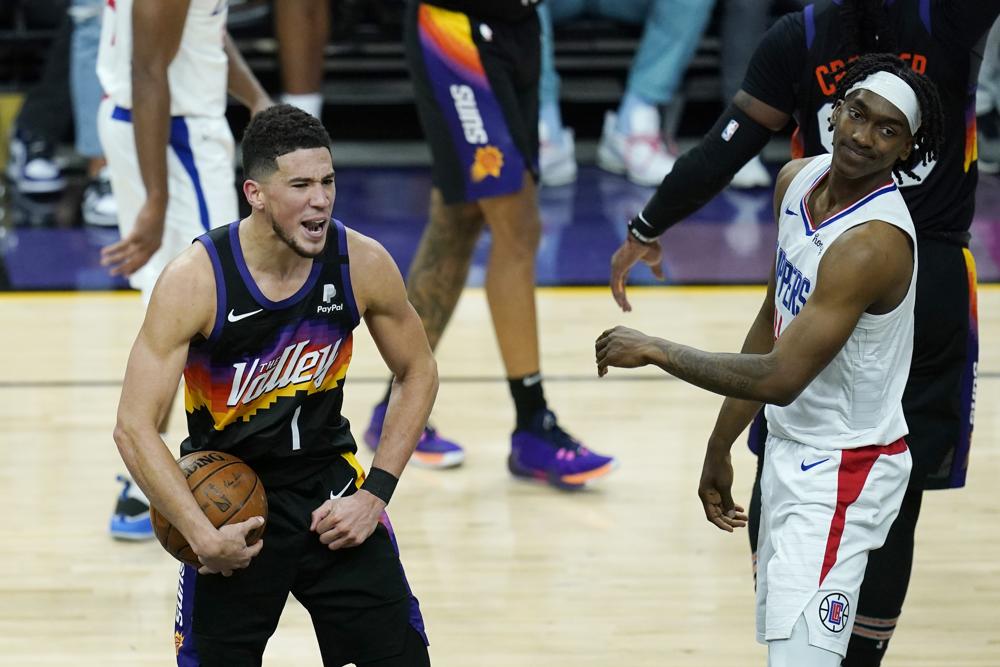 Devin Booker notched his first career triple-double as the Phoenix Suns topped the Los Angeles Clippers 120-114 in Game 1 of the Western Conference finals on Sunday.

Without the two aforementioned stars in the game, the spotlight fell on Booker. He didn’t disappoint Phoenix fans, finishing with 40 points, 13 rebounds and 11 assists. Booker was 15-for-29 from the floor.

Before Booker, who was the last Sun to record a triple-double in the playoffs? Steve Nash, in 2005.

Although Booker wasn’t named to the All-NBA Team, he delivered a statement with his play on Sunday.

Then he spoke about it.

“I’ll let you guys do the rankings,” Booker said. “I’m just going out there to win every game possible. I’ve been saying this since the start of the playoffs — every next game is the biggest game.”

For the Phoenix Suns, Game 1 ended with their eighth consecutive victory.

All five Suns starters scored in double figures. Deandre Ayton had 20 points and nine rebounds, Mikal Bridges and Jae Crowder scored 14 and 13 points, respectively, and Cameron Payne chipped in with 11 points and nine assists. So did backup Cameron Johnson (12 points).

Clippers rally in second half

The Los Angeles Clippers pulled within 116-114 on a Terance Mann 3-pointer with 22 seconds left.

However, the Clippers, who eliminated the Utah Jazz in the Western Conference semifinals, could never get over the hump down the stretch.

“I have no excuse,” Lue commented after Game 1. “I thought we played hard and competed. A little credit — they were making shots and we didn’t. But I loved our fight. I loved what I saw.”

Earlier, Paul George carried the Clippers during a big third-quarter run. They overturned a 78-68 Suns lead with a 16-2 run of their own, taking a an 84-78 lead. George scored 15 of his team-high 34 points in the third quarter.

Booker’s scoring contributions trumped George’s in an entertaining third quarter. He had 18 points in the third.

As a result, the Phoenix Suns stayed competitive throughout. The scored was tied 93-93 entering the final stanza.