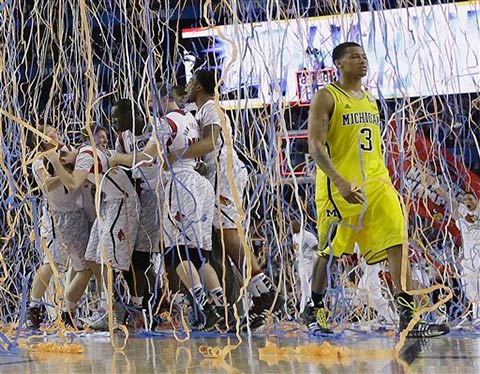 Two six-footers playing above the rim… Michigan’s Trey Burke looks as if he gets a clean block on a lay-up attempt by Louisville’s Peyton Siva late in the NCAA National Championship game. Burke was called for a foul on the play, sending Siva to the line with just over five minutes to play and Louisville up three, 67:64.

The Louisville Cardinals rallied late in their NCAA National Championship game with the Michigan Wolverines to earn Louisville it’s third title, the last coming in 1986 under former coach Denny Crum. It was a basketball game that will be talked about for a long, long time as one of the most intense, well-played games ever. At every corner there were amazing stories, not least of which was Louisville guard Kevin Ware, who despite being on crutches after breaking his leg last week in front of millions, was able to cut down the final pieces of the net when the Georgia Dome staff lowered the basket so he could reach it. Anyone watching games for the last few weeks most likely came away thinking that it was a small gesture, but the fact that it just happened says volumes on how smoothly this tournament seems to run.

Then there was Michael “Spike” Albrecht, a Michigan freshman that had scored a grand total of 48 points all season (24 in Big Ten play). Albrecht came in the game mid-way through the first half and hit a couple of triples in a row. Not big deal on the surface, but when you add those to the other four he’s hit during the tournament, he was now 6 of 6. The thing was, Albrecht, who gets his nickname “Spike” from the fact that when he was five he loved his first pair of baseball spikes (technically they are called cleats, spikes are the metal variety that are worn when players get to the bigger field, but Spike probably has a better ring than Cleats for a nickname…) so much he wore them everywhere, was done, not by a long shot, literally. Albrecht finished the day with 17 points and ended the day was 4 of 5 from behind the arc. Oh, by-the-way, he did that all in the first half, and tied Sam Cassell’s NCAA Tournament record of most made three-pointers without a miss, nine. The kid came in averaging 1.8 points a game, and left in the record books…

Even though the National Championship focuses on the players, the guy that had the best week ever was Louisville coach Rick Pitino. It’s hard to believe that winning the National Championship could possibly fall somewhere in the middle of the list of things Pitino’s gone through this week. To recap: 1). Pitino and his wife Joanne celebrated their 37th wedding anniversary; 2). Pitino’s son Rick, Jr. was hired as the new head basketball coach at the University of Minnesota; 3). Pitino’s horse, Goldencents, won the Santa Anita Derby this weekend and qualified to run in the Kentucky Derby; 4). His club, the Louisville Cardinals beat Michigan to win the NCAA National Championship; 5). Oh, and not to forget… Pitino was voted in as a member of the 2013 Naismith Basketball Hall of Fame Class and will have his induction ceremony in September.

Louisville injured guard Kevin Ware gets the opportunity to help cut down the nets after Louisville’s title win.

Pitino’s Cardinals, the No. 1 seed team in the tournament, had a rough first half against the hot shooting Wolverines, led by Naismith Player of the Year Trey Burke, who scored the first seven points Michigan put up. Right after the first media timeout Albrecht entered the game and hit his first triple to put Michigan up 10:7. The team’s exchanges baskets and after Louisville’s Russ Smith missed a three-point attempt, Albrecht hit his second to push the lead to six, 17:11. Shortly after, one of the best sixth men in the game, Luke Hancock gave Burke a fake to get him off his feet and then jumped into him to draw a foul, Burke’s second with 11 minutes to play in the first half. Burke would spend a lot of time on the bench with two fouls, so much so that he ended the game with those same two fouls.

After Hancock connected on two of his three free throws Michigan got six unanswered and the record setting crowd of over 74,000 in attendance saw something that Albrecht hadn’t done the entire tournament thus far, miss a shot, when he pushed a single attempt to the left. He hit the second, giving the Wolverines a 26:17 lead with just over eight minutes to play in the first half.

With just over three minutes to play in the first, Tim Hardaway, Jr. drove the lane and picked up two, giving Michigan a 12-point lead, 35:23. Louisville took a timeout and every Louisville in attendance and watching or listening had to be wondering when the ‘Louisville Run’ was coming, as it has so many times this season. Five seconds after putting the ball back into play they found out as Hancock dropped in a three-pointer. Michigan came up empty and Hancock hit a three pointer when they got back down to the Louisville end of the court, cutting the lead to six, 36:32. Before Michigan would score again Hancock had dropped in four and Peyton Siva and Montrezi Harrell had connected on one of the most perfectly timed alley-oops ever that put a few exclamation points on the end of the 14-point run that the Cardinals had just put together, giving them the lead, 36:37.

Glen Robinson III dropped in two free throws with 2.5 seconds in the half remaining to give Michigan the lead back as they headed into the locker rooms for the basketball version of a collegiate mid-term break.

The first six minutes of the second half seemed like a different game as the hot hands cooled off and the pace slowed dramatically. With just under 14 minutes to play the score was knotted up at 47 when Louisville got the momentum going and the game moving along. Chane Behanan’s pair of singles allowed Michigan to set up their press, accounting for freshman Albrecht to lose the ball and setting up a three-ball for Smith, giving the Cardinals a five-point lead, 47:52. The club’s traded baskets for the next four minutes with the margin holding between two and six.

With just under five minutes on the clock, Cardinal big man Gorgui Dieng got the ball on the box on two consecutive trips down the court and put on some nifty post moves to get Louisville up by eight, 65:73. Hardaway split a pair of free throws and Hancock got a kick pass from Smith for a triple, which he calmly knocked down for the first Lousiville double-figure lead in the second half, 76:66.

Michigan was able to get within four, 74:78, with just over a minute to play. They hadn’t been the model of consistency at the line in the first half, but down the stretch the Cardinals did what they had to do to hold on to the lead and with it the 2012-13 NCAA National Championship, 82:76.

Luke Hancock is all smiles after winning a Nationals Championship and the MVP of the tournament award.

Hancock was named the Tournament MVP and led the Cardinals in the title game with 22 points. Siva contributed 18 points, 6 rebounds, 5 assists, and 4 steals. Behanan added a double-double, with 15 points and 12 rebounds.

Burke was game-high for Michigan with 24 points, 4 rebounds, and 3 assists. Albrecht added 17, and the duo of former NBA player sons, Robinson III and Hardaway, Jr., added 12 points each.