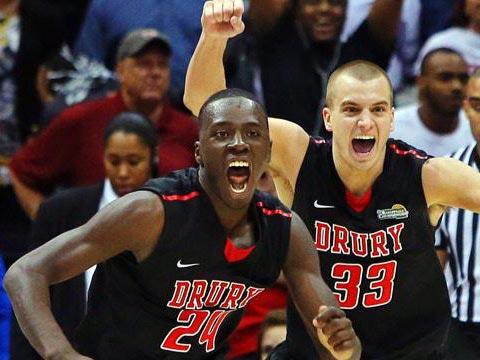 In the DII game, the Drury University Panthers of Springfield, Missouri, got two free throws by Alex Hall with 23 seconds to play to outlast Metropolitan State University of Denver, Colorado for the DII National Title, 74:73. It is the first NCAA National Championship for Drury, but their second National Title, having won the NAIA tournament back in 1979.

In the DIII game, the Amherst College Lord Jeffs of Amherst, Massachusetts pounded the Crusaders of the University of Mary Hardin-Baylor of Belton, Texas, 87:70. This is the Lord Jeffs second National Title, their last coming in 2007.

With the DII National Championship being played in Atlanta the same weekend as the DI Final Four, the atmosphere surrounding the DII title game and all that goes with it was kicked up a few notches this year. As Drury’s sophomore guard Drake Patterson put it, “This was easily the most fun game of my life. I didn’t expect it. It was packed. It didn’t look like there was an open seat in the house. Our fans were unbelievable. Each play that we made, big or small, our fans were cheering for us as loud as they could. I don’t think they understand how much that helps us and how much we appreciate it.”

A reported crowd of 7,763 (the highest total since 1971 according to the NCAA) filed into Philips Arena on Sunday to watch Drury University take on Metro State for the Division II National Championship.

Not only were they playing in front of a much larger crowd than they are used to, they also were introduced during the Michigan-Syracuse game on Saturday, in attendance were an estimated 75,350, which is the second highest total on record (75,420 in 2011).

Coming into the game, Drury was riding a 23-game win streak that dated back to January 12th.

Once they got on the court, Metro took it to the Crusaders, dropping in long-balls, then pounding the ball inside for lay-ups and dunks. A 12-point run late in the first half put Metro up 39:22 with just under three minutes left in the first half.

The Panthers were able to cut the margin to 12 with a layup that killed the drought and then a triple by Brandon Lockhart to close scoring for the first half. The clubs tried to tally more before the half was over, but it turned out to be turnovers and missed shots only before they headed to the dressing rooms at the break.

It took Drury 11 seconds to get the first points of the second half when Alex Hall knocked down a three-ball to cap an eight point run that included points in both halves. Neither team scored over the next two minutes, but once they did they exchanged baskets through the heart of the second half. Drury chipped away at the deficit, slowly, but surely, until they finally drew even at 53 with 13 minutes to play.

The battle continued with Metro sliding out to a six-point lead as the clock ticked off the first seconds of the 36th minute, 73:67. Unfortunately for Metro, that’s the last time they would change their score in the contest, all the while Drury was back to working their way into the lead. It didn’t take long for Drury to counter, Ian Carter hit a jumper just 14 seconds after the last Metro points from Nicholas Kay, to cut the advantage to four, 69:73. Cameron Adams hit a layup to pull within two, 71:73.

Carter picked Demetrius Miller’s pocket at the other end of the court, who then promptly fouled Cameron sending him to the line for two, which he missed both.

It took over two minutes before anyone would score again, this time it came with 26 seconds to play and again Cameron toed the line and split a pair of singles. His free throw troubles potentially could have done them in, but a mere three seconds later Alex Hall was fouled by Brandon Jefferson. Hall drained the charity tosses to put Drury up 74:73 with 23 seconds left.

Metro called a time out to regroup and plan for a final shot. As they worked the clock down, it was Mitch McCarron that launched the potential National Championship winner, but he came up empty. Metro was able to get the ball under the basket and got another shot that also came up short and just before a third could be put up, the horn sounded, giving Drury their first NCAA National Title by one point.

For the Metro State Roadrunners, all five players that scored contributed 10 or more. Jefferson led the was with 19; McCarron tallied 16 points, 8 rebounds, 5 assists, and 7 steals. Jonathan Morse and Miller contributed 14, with Morse also grabbing 9 rebounds on the game, and Kay added 10 points, 6 rebounds, and 5 steals.

Like Drury, Amherst came into the National Championship game with an impressive win streak in tow, also 23 games. The Lord Jeffs last lost a contest this season back on December 6th, 2012, when they fell to Babson, 78:70.

Fortunately for Amherst, the National Title game wasn’t as close as that one and of course, they won this one, big, 17 points big, as they dominated the University of Mary Hardin-Baylor, 87:70, in a game that was never close for more than a few seconds and only two or three times at that.

Everything about National Championship Week was big for the Lord Jeffs and the Crusaders from Mary Hardin-Baylor. When Thomas Orr of MHB was asked if he’d ever played in an NBA stadium before, he cracked a smile and said he had a number of times, “I played it on a video game, so I think I got it. I’m a little familiar with the gym…” Considering the fact that Orr was game-high with 24 points and 11 rebounds, it would seem that he was right.

As if he had just finished watching ‘Hoosiers’, Amherst senior Willy Workman stated, “We knew the hoop was 10 feet tall. The free-throw line was 15 feet, and we had each other. It’s been about us all year long. We knew that if we just stuck together and played as five, that everything outside the court wouldn’t matter.” We’re wondering which of his teammates he put on his back to hold the tape measure on the rim…

Workman was part of one of the more interesting comments to come out of the Division III title game. It was his coach David Hixon that related a story of how he gives all his players a series of thought-provoking questions before the season starts to get an idea of who they are and how they think. In answering the question, ‘What do you fear the most?’, it was Workman who penned (many months ago) that his biggest fear is that some guy at the ring factory gets the size wrong on his National Championship ring. It’s a safe bet that his order will have the size starred, highlighted and probably phoned and emailed in, just to be sure it’s right.

This was Amherst’s second National Title in six years, having last cut the nets down in 2007. Hixon has been at the helm at Amherst since 1977, which was two years after he graduated from Amherst in 1975, the year he was the captain of the school’s basketball team.

The Lord Jeffs set the early tone getting out 10:0 less than three minutes into the game. MHB got on the board shortly after and traded baskets with Amherst for the better part of the rest of the first half. The lead maxed out at 15, but was only eight points, 38:30, as the horn sounded for the mid-game intermission.

The Crusaders came out with some fire and knocked down the first four points, to get back to within four, 38:34. For the next few minutes the clubs exchange buckets in pairs, Amherst got a layup and a then a triple, then MHB hit a jumper and a triple, but then they hit a dry patch for nearly three minutes while Amherst continued scoring. With just under 10 minutes to play the gap had grown to 13, 45:58, and it never got under double figures again. From there, the Lord Jeffs held their ground and ran out the clock so they could collect their hardware and Workman could find out just whom to call to make sure they get that size right.

Allen Williamson led the way for Amherst with 18 points, and 6 rebounds. Aaron Toomey added 16 points, 6 rebounds, and 6 assists. Connor Green also contributed 16 points to the effort. Workman did his part to get that ring he’s been dreaming about since he was a kid tossing up shots in his driveway by dropping in 14 points, grabbing 10 rebounds and even dishing off 4 assists.