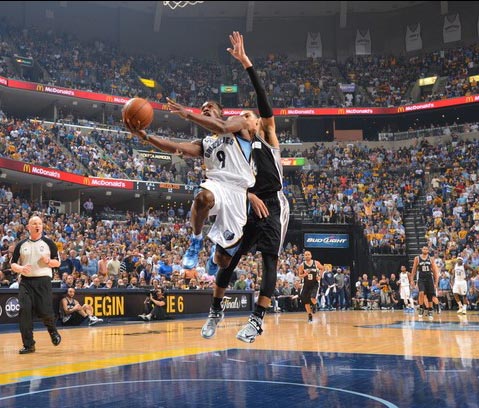 Memphis Grizzlies’ fans show their spirit outside the FedEx Forum in Memphis prior to Game 3 between the Grizzlies and The Spurs.

The Memphis Grizzlies built an advantage as high as 18 points in the first quarter of Game 3 of the NBA Western Conference Finals on Saturday, only to lose all but four points of it by the halftime break to the San Antonio Spurs. The clubs had an epic battle in the second half that went down to the wire, ultimately needing an extra five to determine a winner. When the dust had settled, the Spurs had come from that early 18-point disadvantage and beat the Grizzlies on their home court to pick up their third win in the best-of-seven series. Memphis will host Game 4 on Monday and hope to send it back to Texas for a Game 5, while the Spurs will look to sweep the Grizzlies in the Finals and get some rest for the championship round while the Eastern Conference Finals between the Miami Heat and the Indiana Pacers conclude later in the week. Game 3 will take place on Sunday in Indiana, Game 4 will be Tuesday in Indiana, and Game 5 will be on Thursday, back in Miami. If a Game 6 is needed they’ll play next Saturday in Indianapolis. Should they go to Game 7, it’ll will be played in Miami on Monday, June 3rd.

The early story in the Grizzlies-Spurs contest was the horrific play of the Spurs in the first 12, as they turned the ball over eight times, with most of those turnovers resulting in points on the other end. They also only managed to shoot 4 of 19 (21.1%) from the floor in the frame, and in the only stat that really matters, the one they keep updating on the big board hanging above the hardwood, they were down 29:13 when the horn went off at the end of the quarter. The stat that might keep Grizzlies coach Lionel Hollins awake is their 10 for 18 (55.6%) from the free throw line, including missing four key freebies late in the contest.

Due to the lack of production, Spurs’ coach Gregg Popovich decided to bench the starting five during the first quarter and shake things up a bit.

We had maybe eight turnovers in the first quarter. It looked like those five guys (the starters) had been asleep since Tuesday, and so we thought we might as well get five different bodies out there and at least start to compete and not be as sloppy as that group looked.
— San Antonio coach Gregg Popovich

The Grizz got rolling right off the tip, dropping in the first five points, then getting up 12:3 at the mid-way point. With just until five minutes to play in the stanza the Spurs called a timeout, coming out of that timeout was a fresh set of guys on the floor. Mike Conley’s triple with three and a half minutes left in the quarter marked the end of seven-point run giving Memphis a 19:5 advantage. With 10 seconds on the clock Jerryd Bayless drained a three-ball to put the hosts up 29:11, but Manu Ginobili tipped in a missed Gary Neal layup with 0.3 on the clock to give the Spurs the last points of the frame.

Adding to the deuce they got from Ginobili to end the first, Kawhi Leonard opened the second with a dunk, followed-up by a Matt Bonner triple, then a Tony Parker lay-up for nine unanswered, cutting the lead to nine, 29:20. Parker hit a floater in the paint with just over two minutes to play in the half to cut the gap to six, then connected on a pair of singles with 32.6 remaining to end scoring at 44:40 at the break.

Tiago Splitter put San Antonio on the board first in the second half with a layup. Zach Randolph was fouled by Splitter and split a pair of free throws to put Memphis up three, 45:42. Tim Duncan hit a jumper to pull the Spurs to within one, 45:44. With three minutes left in the frame the Grizzlies got back up to a nine-point lead after Quincy Pondexter dropped in a deuce in the paint, then Bayless connected on a pair of jumpers to open things up a bit, 61:52. Ginobili brought the Spur back with a runner and a pair of singles, with a Boris Diaw layup in the middle, bringing the guests back to within three, 61:58. Pondexter got two in the paint, then the Spurs outscored their hosts 2:8 in the final minute to head into the final 12 with the Grizzlies only up by a point, 65:64.

Danny Green dropped a long-ball in for the Spurs’ first lead of the night, 65:67. Conley got the lead back up with a jumper that turned into a three-point play after being fouled by Parker, but Duncan got his 15th point with a pair in the paint, to swap the lead again. Randolph split a set of charity tosses, then Ginobili hit a triple and Bonner sank a jumper and was fouled. After finishing the three-point play the Spurs were up six, 69:75. Conley and Pondexter hit back-to-back three-balls, followed by a Randolph free throw (missing the second), to regain the lead with seven and a half to play. For the rest of the quarter the clubs exchanged the lead, with neither team getting up by more than two. Ginobili hit a set of free throws with just under a minute to play to give the Spurs a one-point lead, but then he fouled Allen 20 seconds later, sending him to the line for a pair. Allen missed the first, but made the second to knot the score at 86. Ginobili missed a triple with 20 seconds to play, giving the Grizzlies a chance to run down the clock for one shot. Conley took the ball down the right side and put a shot high on the glass, but wasn’t close to falling in, sending the game into an extra period.

As he did in the last OT game, Duncan took control early, this time hitting the first five points the Spurs would tally. In the first three minutes San Antonio outscored the Grizzlies 3:12 to build a nine-point lead that they would never give up. In the final five the Spurs would outscore Memphis 7:18, to earn their 93:104 win, and improve to 3-0 in the series.

Yeah, it is frustrating, but it gives us hope at the same time, knowing that we can fight our way back, and we have had chances to win each one of these games. This one was a tough one to swallow. But it’s a good learning lesson, and there’s no group of guys I’d rather be with down 3-0 to try to fight back in it.
— Grizzlies guard Mike Conley

Conley led the Grizzlies with 20 points and 4 assists, Marc Gasol hit a double/double with 16P/14R, Pondexter ended with 15 points, Randolph picked up a 14P/15R double/double, Allen contributed 12 points and 7 rebounds.