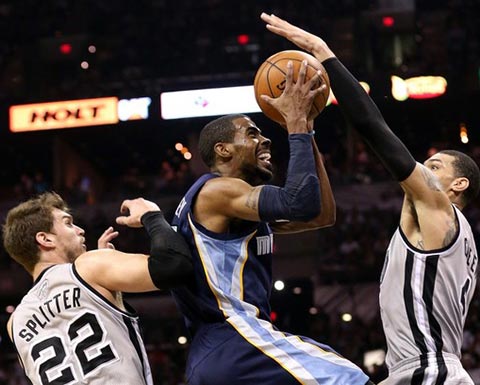 Tony Parker turns the corner and heads to the hoop, Zach Randolph follows.

The San Antonio Spurs had to be feeling fairly solid about things at halftime of their NBA Western Conference final contest with the Memphis Grizzlies on Tuesday as they were sitting on a 15-point lead at the mid-game break. Unfortunately for them, the Grizzlies were able to put together a 2:15 scoring run to close out scoring in regulation to send the clubs into an extra five. The Spurs jumped on veteran Tim Duncan’s shoulders, and he carried his mates to the Game 2 win dropping in six in the OT period to finish with a team-high 17. Duncan also became the first player in NBA history to tally 500 blocks in during playoffs.

After only scoring two points in Game 1, Memphis’ Zach Randolph had an extended film session and little sleep trying to figure out how to make sure he didn’t fall into an extended slump. He kept a positive attitude that no doubt helped the situation:

Muhammad Ali, he got knocked down before. What made him the greatest fighter in the world is he always bounced back.
–Zach Randolph

Randolph definitely bounced back in Game 2 and was part of a game with some impressive stats – Randolph hauled in 18 rebounds (11 defensive, 7 offensive) and Marc Gasol grabbed 14 rebounds (11 defensive, 3 offensive), and the Spurs’ Tony Parker dished off 18 assists coming just to short of a team record. All five of the Spurs’ starters scored in double figures and both Randolph (15P/18R) and Gasol (12R/14R) tallied double/doubles for the Spurs. Jarryd Bayless knocked down 18 points off the bench for Memphis.

San Antonio hit the first seven points of the contest and it took four minutes for Memphis to tally their first. The Grizzlies dropped in the final six of the frame to cut the Spurs’ lead to two, 15:13.

The first three minutes of the second stanza was a flurry of scoring with three triples, two jumpers and six points in the paint. The Grizzlies’ Keyon Dooling hit the first five to put Memphis up 15:18, and Tiago Splitter finished the run with a lay-up that put the Spurs back up 24:23. The clubs went through a three minute scoring drought, then another two minutes of jumpers and three-balls. With just under five minutes to play in the half Tayshaun Price hit a jumper to bring the score to 33:30. Duncan countered with a jumper, which was the start of a 15-point run that was stopped with a free throw with 0.5 seconds to play, giving San Antonio a 46:31 advantage heading into the intermission. During the final run the Grizzlies went 0 for 14 from the floor, including six misses in the last 10 seconds.

Jerryd Bayless takes the ball to the hole for Memphis during Game 2.

Memphis came out of the break with a sense of urgency and dropped in more points in the third 10 than they scored in the entire first half as both clubs tallied 63 total. The Spurs’ built a lead that peaked at 18 with three minutes to play, then the Grizzlies hit six unanswered to cut the margin to 12. Over the last 30 seconds each team hit a pair of singles and a lay-up to wrap up the third with San Antonio up 76:64.

Four minutes into the final frame the Spurs had held their margin at 13, 83:70, but shortly after, Memphis, specifically Randolph and Quincy Pondexter, got hot and went on a 2:15 run with Mike Conley dropping in a floater in the paint to knot the score at 85 with 18.2 seconds to play. Along the way the Spurs basically handed the Grizzlies the game when Manu Ginobili was whistled for a Type 1 flagrant foul on Tony Allen after Ginobili turned the ball over on a bad pass and then grabbed Allen’s arm on his way up for the lay-up causing him to hit the floor hard. Allen hit the singles and due to the flagrant foul the Grizzlies also got the possession, which ended in the Conley floater to tie the score. San Antonio got the ball back, but Duncan’s shot at the buzzer missed everything to send the game into OT.

Duncan made up for the miss by hitting the first six for the Spurs in the extra frame, with Allen’s earlier layup Duncan’s haul brought the score to 91:87. Bayless knocked down a deuce with 16.9 to play to cut the gap to two, 91:89. Parker was sent to the line and split the pair to extend the lead to three, 92:89. The Grizzlies needed some extra time to put together a plan, so they used their final two 20s in a row to discuss things. When they executed the wheel play, Bayless got the ball at the top of the key with the left side of the lane open, but he pulled up for a triple that was quite a bit off the mark, much to the displeasure of head coach Lionel Collins, and giving the Spurs their second game of the best-of-seven series. Game 3 will move to Memphis Saturday, with Game 4 scheduled for Monday.