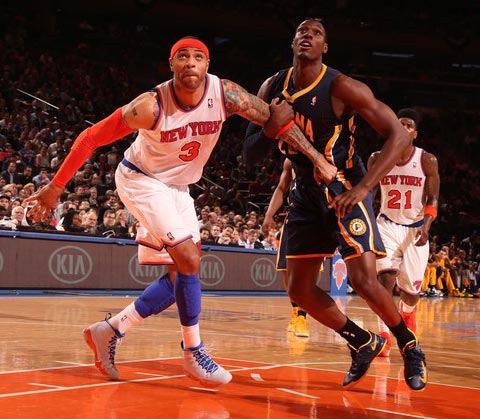 The New York Knicks fought off elimination in the NBA Conference semifinals with an 85:75 win over the Indiana Pacers at Madison Square Garden, while the San Antonio Spurs finished off the last season’s Finalist Golden State with an 82:94 victory in Oakland.

San Antonio will now face the Memphis Grizzlies in the Western Conference Finals with the first game to be held on Sunday in San Antonio.

New York Knicks – Indiana Pacers, 85:75
Carmelo Anthony led the Knicks to a Game 5 win over Indiana with 28 points to force a Game 6 back in Indianapolis on Saturday. New York outscored the Pacers in the first three quarters and drew a tie in the fourth to pick up the 10-point win.

We wasn’t ready to go home yet. We wanted to protect our homecourt. We let one slip away here on our homecourt that put us in the position that we’re in right now. But we’re just taking it one day at time, we have faith, we believe. And we feel confident about this one….We proved that we can win on the road. And we have to go to Indiana and do that.
— Carmelo Anthony

The Pacers had to play Game 5 without the services of George Hill, who suffered a concussion in Game 4 after getting hit by Tyson Chandler. Hill has been big for Indiana in the series as he’s averaged 17.25 points per game over the first four games. He’s listed as ‘day-to-day’, so his status for Game 6 is unknown.

The Knicks got 35 off the bench with J.R. Smith and Chris Copeland dropping in 13 a piece; Indiana’s bench only contributed 10 in the contest.

Kenyon Martin heads to the hoop around Roy Hibbert

Anthony opened the game with a jumper and a triple, and was followed-up by Iman Shumpert’s jumper to give the Knicks a 7:0 lead. David West got the Pacers on the board with a deuce in the paint and Paul George followed with a dunk. Raymond Felton and Anthony tallied for New York to get up 11:4. The Pacers got their shooters on target and pulled to within three at 14:11 mid-way through the frame. The next points wouldn’t be scored for two minutes when George would hit one of three charity tosses to break the drought and bring the guests to within two, 14:12. Ian Mahinmi tallied three, while Smith hit a three-ball and Anthony knocked down a jumper to close out the first 12 with the Knicks up 19:15.

Five minutes into the second Copeland dropped a triple to put the Knicks up nine, 32:23. Indiana scored the next six straight to cut the margin to three, 32:29. Anthony hit the next six points the Knicks would tally and the Pacers could only manage to connect from the free-throw line. Anthony finished the first half with 15 and the Knicks took a 40:34 lead into the mid-game break.

The Pacers cut their deficit to three with a lay-up by Roy Hibbert, bringing the score to 47:44. Smith hit a jumper in the paint, Martin split a pair of free throws, and Copeland hit the cords from behind the arc to extend the hosts lead to nine. By the end of the frame the margin was 10, 67:57, with Anthony at 21 and George at 16 for the Pacers.

Indiana put together a fourth-quarter rally getting to within four, 75:71, with just under seven minutes to play, behind 10 points from George. Anthony got control of the game after a jumper and a pair of singles, then Felton hit a lay-up to extend back to 10. Green hit a jumper to get the Pacers back to eight down, but Anthony countered immediately with a fadeaway. Indiana wouldn’t get any closer and the Knicks would pick up their second game to force a Game 6.

Anthony was game-high with 28, Smith and Copeland added 13 each, and Felton dropped in 12 for the Knicks.

Golden State Warriors – San Antonio Spurs, 82:94
Tim Duncan appeared in his 200th post-season game Thursday, scoring 19 points and leading the San Antonio Spurs to an 82:94 win to give the Spurs a 4-1 series win. All five Spurs’ starters finished the game in double figures.

It was a tough series, really tested our defense. I’m really proud of our guys, that they were pretty darn consistent after the first two games, as far as the defense goes.
— Spurs coach Gregg Popovich

The Spurs came out of the first frame with a 19:21 advantage, after five lead changes and six ties.

In the second 12 the Spurs went on a 0:10 run to get up 23:33 five minutes into the quarter. Stephen Curry was able to pull the Warriors back to within three dropping in nine points over the next two and a half minutes. San Antonio extended back to nine with six unanswered, and Curry cut that margin to seven with a lay-up in the closing seconds of the half. The Spurs took a 40:47 advantage into the locker room at the intermission.

The Spurs used a six-point run to build their biggest lead of the game at 13-points late in the third quarter, 48:61. Golden State outscored the Spurs 11:4 over the rest of the quarter to cut the margin to seven, 59:66, heading into the final quarter.

Clay Thomson knocked down a triple to pull the Warriors to within three with 10 minutes to play. The Spurs were able keep ahead of their hosts, but with five minutes to play Curry hit a jumper to close the gap to two, 75:77. Tony Parker hit a key three-ball, then Kawhi Leonard connected on a pair of singles to restore the Spurs seven-point lead. Jarrett Jack hit a jumper then a pair of free throws cutting the deficit to three again. Leonard knocked down a three-pointer, then Thompson and Curry both missed triples for the Warriors. Parker followed-up with another triple to give the Spurs a nine-point lead with a just over a minute left and ice the game for the Spurs, sending them into the Western Conference finals against the Memphis Grizzlies.