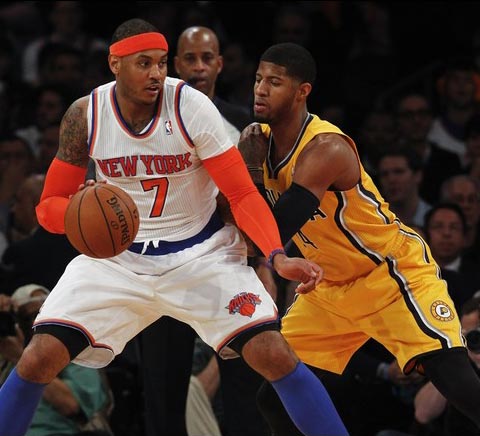 Kevin Durant (35) tries to drive around the Grizzlies’ Tayshaun Price.

The NBA Conference semifinals moved to Game 2 with both games going to the club that had lost Game 1, tying up both best-of-seven series at 1 game each. In New York, the Knicks went on an unprecedented scoring run late in the contest to pick up not only the game, but also grabbed some confidence as they prepare to move the series to Indianapolis for Games 3 and 4. In Oklahoma City the Thunder and the Memphis Grizzlies spent 40 minutes exchanging the lead, but the Grizzlies scored 10 in a row in the last two minutes of the game to earn a 93:99 win to knot the series at 1.

The Knicks got the upper hand on the Pacers with a nine-spot in the first, outscoring their guests 29:20. With six minutes left in the second the Knicks ran off eight to get up 13, which was countered by the Pacers who scored the last eight to send the clubs into the intermission with New York up 47:42.

Mid-way through the third the Pacers knotted the score at 58 with a Roy Hibbert jump hook. Anthony tipped in a Raymond Felton missed jumper and Lance Stephenson put the Pacers up one with a triple from the corner. Kenyon Martin gave the hosts the lead back with a lay-up, which was countered by a George Hill three-ball, putting Indiana up two, 62:64, with three and a half minutes to play in the third. Anthony knotted the score up at 64 with a layup, which would prove to be the first points of the 36:4 run they would put together. The next time the Pacers would put up a field goal would be an Orlando Johnson long-ball with just over three minutes left in the game to bring the score to 98:71, and with the game long over.

Game 3 will be move to Indianapolis on Saturday.

Oklahoma City Thunder – Memphis Grizzlies, 93:99
In a game that featured 27 lead changes, the Memphis Grizzlies outscored the OKC Thunder 19:30 in the final frame of Game 2, to come out with a 93:99 win and pull even in the series at one game each. Mike Conley led Memphis with 26 and the shot that put the game on ice in the last minutes of the game. The Thunder got 36 from Kevin Durant, but it wasn’t quite enough as he went scoreless in the last three minutes and other than an uncontested triple at the buzzer by Derek Fisher, the Thunder hadn’t tallied any points in nearly three minutes of the game, while Memphis put down 10.

The Grizzlies got up seven with a minute left in the first frame, but five unanswered by Durant pulled the Thunder within two, 21:23. Mid-way through the second quarter the Thunder knocked down four straight triples, three from Fisher and one from Serge Ibaka. During the same time Marc Gasol scored five on a three-point play and a pair of singles, which gave OKC a five-point lead, 45:40. Memphis ran off seven unanswered at the two minute mark to get up three, 49:52, which is where the margin was when the horn sounded at the end of the half with the Grizzlies up 51:54.

Durant and Ibaka opened the third with jumpers to grab the lead. The clubs exchanged the lead throughout the quarter until the Thunder outscored Memphis 10:4 over the last three minutes to build a five-point margin, 74:69, heading into the last 12.

Conley drew first blood in the fourth with a triple, followed-up by a pair of singles by Tony Allen to tie the score at 74. With two minutes to play, the Grizzlies ran off 10 straight to put the contest away and even up the series, 1-1.

We just gave up too many second-chance points and offensive rebounds. We’ve gotta block them out and hold our ground. We gave them 30 points in two quarters and we’re a better defensive team than that. I thought we had a couple of defensive breakdowns that really hurt.
— Thunder coach Scott Brooks

Conley was one assist shy of a triple/double with 26 points, 10 rebounds, and 9 assists. Gasol added 24 points, 5 rebounds, and 5 assists, Zach Randolph scored 15 and hauled in 8 rebounds. Allen contributed 12 points and 7 rebounds.

Durant was also one assist short of his own triple/double, tallying 36 points, 11 rebounds, and 9 assists. Fisher added 19, Ibaka contributed 11 points and 5 rebounds, and Reggie Jackson scored 10.

Game 3 will be played in Memphis on Saturday.