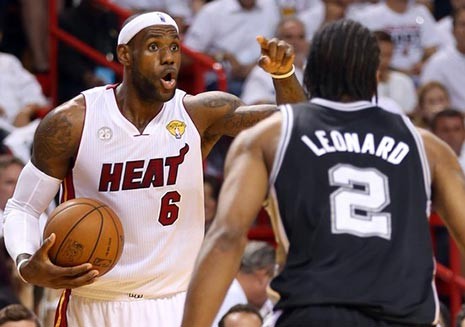 The Miami Heat celebrate after receiving their hardware.

Throughout the NBA Finals the first six games were dictated by scoring runs and who put out the last, or biggest. As Game 7 unfolded you couldn’t help but wonder which club was going to burst out and drop 10 or 15, then wait for the other to duplicate, or not. Other than the first quarter, it never happened, and those that watched the final 48 minutes of basketball to be played in the 2012-13 NBA season were treated with some of the best basketball they’ve seen. As the final minute ticked off, Miami got the breaks and the ball to hit the cords and San Antonio fell to missed opportunities and turnovers. When the buzzer sounded, the defending champions had held off a quality club that had the title in their grasp at the end of Game 6, but let it slip away.

Miami earned their second straight title with a 95:88 victory in Miami behind 37 from LeBron James, who was named the series MVP for the second straight season. Dwayne Wade was a huge factor for Miami in Game 7, dropping in 23 points and hitting some timely jumpers in the process. Shane Battier also came up big for the hosts, dropping in six triples for 18 points. Battier had only scored 21 points in the first six games

Chris Bosh grabs a rebound during Game 7 while Manu Ginobili looks on.

It became time. [James] always rises to the occasion when it matters the most, when the competition is fiercest. It was odd, all year he had been best perimeter jump shooter in the league though he’s an attacker and got to the rim, to the free-throw line.
–Heat coach Erik Spoelstra

For San Antonio, they missed the points they had been getting from both Tony Parker and Danny Green. Parker was 3 of 12 from the floor and scored 10, while Green, who set the NBA three-pointer record in Game 5, was only 1 of 12 from the floor and scored 5. Tim Duncan was the high-man for San Antonio with 24 points and 12 rebounds and, Kawhi Leonard added a 19P/16R double-double on the night.

The obvious word is disappointing. Tough end to the game. Made some bad decisions, missed some tough shots. I don’t know what to say. Just give credit to the Miami Heat.
–Spurs center Tim Duncan

The Spurs got the early lead, getting up 4:11, but were reeled in quickly with the Heat running off eight at the end of the frame to get up by a deuce after the first 12, 18:16.

The second quarter was a battle with the clubs exchanging baskets throughout. The Heat got up by as much as six for a few moments, only to have the Spurs claw back and eventually knot the score at 40. As the half closed Miami held on to a slim two-point advantage, 46:44. James had tallied 15 in the first half, Wade 14, Parker 10, Duncan 13.

Tim Duncan hauls in a rebound during Game 7 as Chris Bosh looks on.

For the first seven minutes of the second half the clubs traded baskets and not allowing more than three points to separate them. With San Antonio up by a point, James dropped a triple, then followed-up with another the next time down the court to put Miami up by five. Leonard took the ball to the hole, got fouled, and connected on the freebie to convert the three-point play. Boris Diaw knocked down a three-ball, Duncan threw down a slam, and Ginobili hit a pair of singles to put the Spurs up by three, 64:67. James hit a jumper to pull to within a point. For over a minute neither team could connect, until Gary Neal dropped a lay-up with 46.4 left on the clock in the third 12. Shane Battier hit his forth long-ball of the contest to tie the score at 69, but Manu Ginobili dropped a finger roll in with 5.2 left. Mario Chalmers took the in-bounds pass and sprinted to the front court, letting a last second triple go from 10 ft outside the arc that banged off the window and dropped in as the buzzer sounded to put the Heat up one, 72:71 with the last 12 minutes of the season left to be played.

Battier opened the fourth with his fifth three-pointer to put the Heat up four, 75:71. Throughout the frame the Spurs would pull to within a basket, then the Heat would drop a three or hit a jumper to hold them at arms length. San Antonio kept getting in position to tie the score, but turnovers kept ruining their opportunities to take the lead. Leonard hit a three pointer with two minutes left to bring the Spurs to within two, 90:88. After a series of three consecutive trips up and down the floor with neither team scoring, Duncan got the ball on the box and had a short-range hook hit the back of the rim and pop out. He also got a hand on the rebound and attempted to tip the ball in, but missed that as well, loosing a key opportunity to knot the score up within a minute to play. On the other end, James hit a jumper to extend the Heat advantage to four. Ginobili committed his fourth turnover and James connected on two singles to push the lead to six, 94:88. Ginobili missed a three-ball with 18.9 to play that was rebounded by Wade, who was fouled by Green. Wade split the pair to ice the game and the Heat’s second consecutive title.