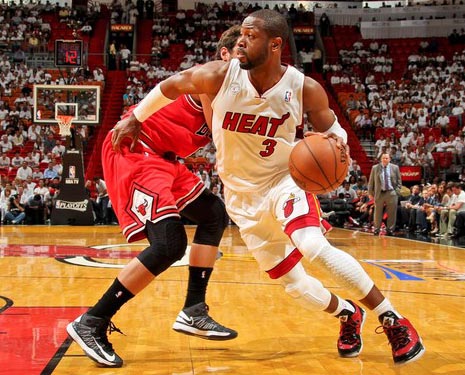 They wrapped up Game 2 in the NBA Conference semifinals Wednesday, with all four series currently at 1-1 splits. The Miami Heat scored at will against the Chicago Bulls in a game that featured a nine technicals, two ejections, and what will most likely be a fine or two handed down by they NBA after they review the tape. In San Antonio, the Spurs made a run at a second consecutive come-from-behind win, but the Warriors held on to even their series at a game apiece.

The boys will take a day off and will hit the hardwood again on Friday with contests in Indianapolis (Knicks vs. Pacers) and Memphis (Thunder vs. Grizzlies), then Saturday will shift to Chicago (Heat vs. Bulls) and Oakland (Spurs vs. Warriors).

The first quarter was tight until the Heat ran off nine unanswered mid-way through to get up 21:15. At the end of the first 12 the Heat were up 25:20, with LeBron James contributing 12. In the second the Bulls stayed closed until a 13:3 run by the Heat to close out the half up 55:41. Norris Cole finished the scoring with two triples for the Heat and James wrapped up the half with 19 points and nine rebounds.

The game got out of hand in the second half as the Heat built a lead that peaked at 46 and tensions flared. Both Joakim Noah and Taj Gibson were tossed in the fourth quarter for offering their objections to calls to the officials. Noah, while on the bench, ended up a few steps on the court expressing displeasure on a call. It didn’t take long for the officials to run him out of the arena. Shortly after, Gibson was called for a foul that he didn’t agree with and got the same treatment. On the way out, he voice his displeasure at the sequence of events, which will probably lighten his wallet a bit after the NBA reviews things.

We got sidetracked and you can’t do that. We showed a lot of frustration to carry over to the next play. You have to have poise under pressure. You come in here, you’re not going to get calls. That is the way it is. That’s reality. You can’t get wrapped up in that stuff. You have to stay focused on the task at the hand.
— Bulls coach Tom Thibodeau.

The Game 3 will move to Chicago and there’s speculation that the Bulls might get the services of Kirk Hinrich (bruised calf) and Luol Deng (illness and complications in his back due to a spinal tap to check for Meningitis). There’s also talk that Derrick Rose might make his return to the line-up after spending the entire season on the DL due to an ACL injury suffered during Game 1 of the Bulls playoff series with the Philadelphia 76ers that required reconstructive surgery on May 12, 2012.

Even though the Heat ran away with this one, the series is still tied 1-1, which is a victory for the Bulls…

We were able to save this one, but we are still in the hole. They (the Bulls) got what they needed. They got one. It doesn’t matter about the score tonight. We need to move on now and get ready to go into the lion’s den on Friday.
— Heat coach Erik Spoelstra

Ray Allen was game-high for the Heat with 21 points, James finished with 19, Cole added 18, Dwayne Wade contributed 15, and Chris Bosh dropped in 13.

San Antonio Spurs – Golden State Warriors, 91:100
The Warriors snapped a 16-year losing streak in San Antonio that amounted to 30 games, with a 91:100 win in Game 2 to even up the series at 1 game each. The Warriors held a 20-point lead early in the third quarter and let the Spurs back in the game as they turned up the intensity and started dropping in shots from everywhere, especially behind the arc. The Warriors were led in Game 2 by Klay Thompson’s 34 points as the Spurs worked to prevent Stephen Curry from repeating the 44 he scored in Game 1.

I thought it was very polite of [Thompson and teammate Stephen Curry] to at least take turns and not both be on fire on the same night. Maybe neither one of them will be hot in Game 3. That’s what I’m hoping.
— Spurs coach Gregg Popovich

Golden State got 11 from Thompson and nine from Curry in the first, on their way to a 23:28 advantage. The second was where the Warriors built their lead, outscoring the Spurs 20:34, giving them a 43:62 lead heading into the intermission.

Thompson dropped in a layup with eight and a half minutes to play in the third to put the Warriors up 20, 49:69. With just under four minutes to play in the quarter the Spurs ran off nine points unanswered to pull within 11, 64:75. Andrew Bogut sank a pair of singles, then Danny Green and Gary Neal hit triples for the Spurs to get them to within seven, 70:77, with just over a minute left. The Warriors finished out the quarter on a 2:6 run to extend the lead back to 11, 72:83.

The clubs exchanged baskets throughout the fourth, with Golden State countering any attempt by the Spurs to catch up. With four minutes to play Game 1’s hero, Manu Ginobili knocked down a triple to pull the Spurs to within six, 89:95. Curry dropped in a layup shortly after and then a jumper with just under two minutes to play, giving the Warriors a 10-point lead again, 89:99, icing the game and knotting the series at 1 game each.

Thompson was game-high with 34 points and 14 rebounds for Golden State, Curry dropped in 22, Harrison Barnes contributed 13, and Carl Landry added 10.