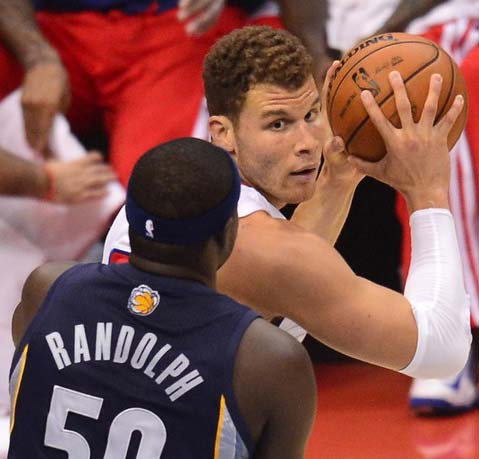 There were two games on the NBA Playoff schedule on Monday, the Brooklyn Nets hosted the Chicago Bulls and the Memphis Grizzlies took the Los Angeles Clippers to the wire in LA. In Brooklyn, the Bulls used a 11-point advantage in the third quarter to even their best-of-seven series with the Nets at a game each, while in Los Angeles the Clippers squandered a 12-point fourth quarter lead to end up in a thriller with the Grizzlies that ended with a Chris Paul floater off the glass to go up 2-0.

Brooklyn Nets – Chicago Bulls, 82:90
After their 17-point blowout in Game 1, the Bulls needed to come out in Game 2 with a solid performance. Not only did they do just that, they completely changed the momentum of the series with an 82:90 win in Brooklyn and will host Game 3 at the United Center in Chicago on Thursday.

Chicago opened the contest getting up 2:8, before settling in to a 17:20 tally at the end of the first quarter. Carlos Boozer picked up two of his 13 points on a tip-in early in the second quarter to get the Bulls up by seven, 23:30. Later in the frame, fueled by six off three straight jumpers from Brook Lopez as well as another earlier in the run, the Nets put together a 12:2 drive that gave them the lead at 39:37. The clubs exchanged baskets for the rest of the quarter, until Brooklyn’s C.J. Watson dropped in a lay-up with 28.0 seconds to play, then was dished the ball after a Lopez steal to drop in a triple as time expired in the half to bring the Nets from six down, to only down by one, 46:47, as they broke for the halftime intermission.

Late in the fourth Brooklyn put together a 10:2 run to cut their deficit to four, 78:82. During the run, the Nets’ Joe Johnson knocked down two triples. Chicago hit the next five points to ice the contest and draw the series to 1 game each.

Lopez was game-high with 21 points for the Nets, Johnson added 17 points, and Watson tallied 10.

Los Angeles Clippers – Memphis Grizzlies, 93:91
Coming into Game 2 off a 21-point win on Saturday, the Grizzlies needed a big day as they prepared to head to Memphis for Games 3 and 4. Facing a 12-point margin early in the fourth quarter, Memphis went on a 4:13 scoring run, with Mike Conley tallying 10 of his game-high 28 points in the seven minute stretch. With 13.9 seconds remaining Memphis knotted the score at 91, but they left too much time on clock and Paul took Tony Allen to the right side of the lane and kissed the ball off the glass to notch their second win of the series.

Memphis led most of the first quarter, getting up 11:17 mid-way through. With just over two minutes left in the second the Clippers scored six unanswered to take the lead 26:25, until Marc Gasol split a pair of singles to knot the score at 26 at the end of the first. Blake Griffin scored 13 in the first frame for the Clippers.

Jamal Crawford took over for Los Angeles in the second quarter, hitting 10 straight over a five minute stretch to give the hosts a three-point lead, 38:35. Conley kept things close for Memphis, dropping in eight of his own. Shortly after the Clippers went on an 8:1 run to get up by eight, 46:38. The guests cut the lead to four, but a Matt Barnes slam inside a minute sent the teams to the dressing rooms with LAC up 50:44.

Memphis regained the lead mid-way through the third quarter with a six-point run to get up 57:58 with seven minutes to play in the frame. Paul hit seven in a row for the Clippers to get the lead back and then hit four more shortly after to get up by six, 72:66, they closed out the quarter up 75:71.

Los Angeles got eight unanswered to open the fourth frame to build the biggest lead of the night at 12, 83:71. Conley countered with 10 to pull the Grizzlies to within three, 87:84. Darrell Arthur tied the game at 89 with a jumper, a dunk and then a single with a minute and a half to play. Paul gave LA the lead back with a driving layup and then the Clippers completely missed a defensive assignment on a perfectly executed pick-and-roll between Conley and Gasol ending in a wide-open lane for Gasol and a thunderous dunk and a 91-all score with 13.9 seconds on the clock. The Clippers called a time out to set up a play, which was to get CP3 the ball. He got it at the top, and with three seconds left he made his move to the basket. Allen played solid defense to keep Paul from a lay-up, but he was able to get enough room to get a shot off that bounced and with 0.1 seconds left. Many of the Grizzlies headed to the locker room, only to be called back out to play the last 0.1. There was no way to get a clean shot off and the guests big comeback was killed at the end to give Los Angeles a 2-0 lead in the series.

Paul led the way for LA with 24 points, 4 rebounds and 9 assists. Griffin added 21 points and 8 rebounds, and Crawford dropped in 15.

Memphis got a game-high 28 from Conley, who also added 9 assists. Gasol contributed 17 points and 7 rebounds. Allen dropped in 16 points, while hauling in 10 rebounds. Zach Randolph added 13 points and 8 rebounds.