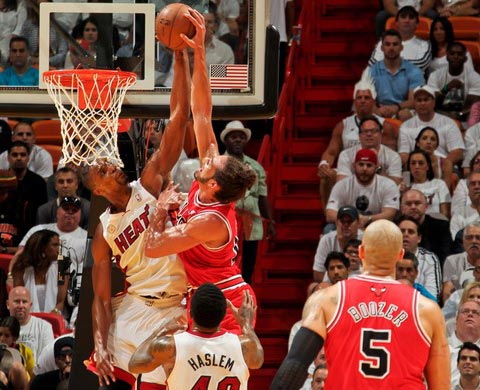 Manu Ginobili readies a ‘bomb’ against Jarrett Jack on Monday. Shortly after this shot, Ginobili would drop in a triple to win the game for San Antonio.

The second half of the opening round of the NBA Conference semifinals was one they’ll be talking about for a while as the Bulls pulled off a classic upset in Miami and the Spurs came from down 16 with four minutes to play to send their game with the Golden State Warriors into not one, but two overtime frames before finally getting a buzzer-beater for the win.

Miami Heat – Chicago Bulls, 86:93
The Bulls came into Miami still dealing with injuries and illnesses, but were able to continue to get the job done and handed the Heat an 86:93 loss in Game 1, in Miami. The Bulls got 27 from Nate Robinson, who finished out the game with 10 stitches in his upper lip as a result from going after a loose ball against LeBron James in first half. James finished with 24.

Chicago got on top early, finishing out the first 12 with 15:21 advantage. Jimmy Butler put in six for Chicago in the first. Miami scored 10 unanswered early in the second to take the lead, then the clubs exchanged baskets and the lead for the rest of the half with the Heat holding a two-point advantage for the bulk of the final minute of the half. Joakim Noah knotted the score at 37 with a buzzer-beater for Chicago.

Mid-way into the third quarter Miami got their first significant lead with a 9:0 run that took them from three down to six up, 55:49 with just over four minutes left in the frame. Chicago countered with to hard driving lay-ups by Robinson, bringing Chicago back within one. Shane Battier connected on a triple with nine seconds to play in the quarter to extend Miami’s lead to four, 62:58.

With six and a half minutes to play James drove the lane, got fouled and finished the three-point play with the free throw to give the Heat a seven-point lead, 76:89. The next trip down the floor Robinson was fouled and connected on his two singles, then Butler was fouled shortly after and he dropped in his pair of free tosses as well. Marco Belinelli knocked down a triple on the return trip for Chicago to cap off a seven-point run that knotted the score at 76 with five minutes to play. With three minutes left on the clock Robinson hit a pair of free throws that tied the score at 83. Chris Bosch got a dunk for the Heat and James split a pair of singles to put Miami up three, 86:83. Belinelli knocked down a triple to knot the score and start a 0:10 run by the Bulls that would finish out the contest, leaving Miami watching from the sidelines… Of the last 10, Belinelli’s three started it, Robinson’s seven finished it.

Robinson was game-high with 27 for Chicago. Butler added 21 points and 14 rebounds, Noah dropped in 13 and grabbed 11 rebounds. Taj Gibson added 12, and Melinelli contributed 10 to the win.

James was high-man for the Bulls with 24 points, 8 rebounds, and 7 assists, Dwayne Wade added 14.

Game 2 will be held in Miami on Tuesday.

San Antonio Spurs – Golden State Warriors, 129:127
In a classic shoot-out, the Spurs got a three-pointer from Manu Ginobili as the clock expired on the second overtime frame in the Warriors-Spurs opening match-up of Round 2. Ginobili had missed seven straight shots prior to the game-winner…

On Ginobili’s cold hand to the game-winner, Spurs coach Gregg Popovich responded during the post-game presser,

I went from trading him on the spot… to wanting to cook him breakfast tomorrow. That’s the truth… When I talked to him he said, ‘This is what I do…’

The clubs put on a scoring exhibition in the third, combining for 70 points, the Warriors putting in 39 behind Seth Curry’s 22 of his game-high 44. With three minutes left in the third 12, Curry dropped in a jumper to put the Warriors up 70:78. Tim Duncan hit a jumper for the Spurs and then Curry had the floor to himself for awhile, scoring 12 unanswered and putting the guests up 18, 72:90. San Antonio finished the quarter outscoring Golden State 8:2 to close out the third down 12, 80:92.

Ginobili got a lay-up to open the fourth, then the Warriors hit six straight to extend the lead back to 16, 82:98. With four and a half minutes to play, that’s were the lead was as the Warriors were up 88:104. The Spurs weren’t done though and a six-point run by Tony Parker got their comeback started. After Parker put down six, Kawhi Leonard added a lay-up and a triple, then Parker got another lay-up, followed by a pair of singles by Boris Diaw. They let Jarrett Jack get a deuce, then Daniel Green finished the 18:2 run by the Spurs with 20.8 seconds to play, tying the score at 106.

The first overtime saw Golden State score the first five, then the Spurs hit seven straight to get up by two, 113:111. Curry got a lay-up to tie things at 113, Leonard hit a jumper to put eh Spurs up two and Jack hit a lay-up with 20 seconds to even things again at 115. Ginobili had a chance with a click left to win it for the Spurs, but he came up empty.

The Spurs pulled ahead late in the second OT with a 9:1 stretch, then Curry hit a pair of singles, that was followed up by the shot that had Popovich wanting to trade Ginobili, a deep three-ball with pressure and plenty of time on the shot clock (13 seconds) to work the ball around. Ginobili missed, and Curry went down and connected on a lay-up to pull within one, 126:125, with 32.8 seconds to play. Parker missed a jumper and Kent Bazemore got a one-handed dish from Curry on the fast-break and finished with a reverse lay-up giving the Warriors the lead with 3.9 to play. Ginobili’s role during the final play was to set a screen and get out of the way, so after he did his job, he cut to the opposite side of the court and was all alone when Leonard fired a cross-court pass to him for a catch-and-shoot that sliced the cords for the win.

Parker led the Spurs with 28 points, 8 rebounds, and 8 assists. Green added 22, Duncan had a double/double with 19 points and 11 rebounds, despite leaving the game in the fourth quarter due to a stomach virus. He did return, but played a limited amount in the overtime periods. Leonard knocked down 18 points while also grabbing 9 rebounds. Ginobili finished with a 16P/11R double/double, and Gary Neal added 10 points.

Game 2 will be played in San Antonio on Tuesday.