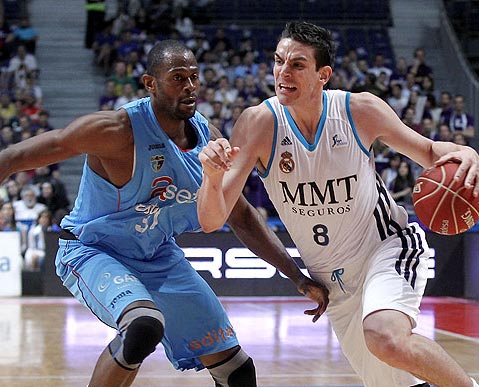 UCAM Murcia’s Kim Tillie looks to pass out of the trap set by Laboral Kutxa.

Spain’s Liga Endesa completed Week 32 of 34 on Sunday, with seven of the top eight clubs coming out with victories. The near clean sweep of the current playoff-qualified clubs means that there was very little movement in the standings, but there are still spots on the bubble up for grabs…

No. 1 Real Madrid: Real Madrid picked up a win over No. 12 Asefa Estudiantes, 93:82 to improve their season record to 28-4, three games ahead of No. 2 Laboral Kutxa. With only two games remaining, Madrid can not be displaced from the top of the league and will be crowned league regular season champion. Real Madrid got up big in the first frame, outscoring Asefa 29:18, and had a 50:38 advantage at the half. Madrid added eight to their margin in the third to set up the final 10 with the hosts up 75:55. The guests sliced 11 off the gap in the fourth, outscoring their hosts 18:27. Nikola Mirotic led Madrid with 18, Jaycee Carroll added 13 and Sergio Llull dropped in 11. Jayson Granger was game-high with 22 for Asefa Estudiantes, Tariq Kirksay added 15, and the duo of Kyle Kuric and Daniel Clark scored 11 each. Madrid will play Joventut next week.

No. 2 Laboral Kutxa: Sporting their new sponsor name, Kutxa, who was added as a major sponsor at the end of April, No. 2 Laboral Kutxa took on No. 14 UCAM Murica CB this week and picked up win 25 on the season. Being four games up on No. 3 Barcelona Regal, Laboral will finish the season in the No. 2 spot. Against Murica Laboral took the early lead, outscoring their hosts 15:26. The second frame was a shootout with the two clubs scoring a total of 61 points, with Murica winning the period 34:27 to head into the half down 49:53. The home club took the lead in the third, 72:69, but Laboral grabbed the win with a 23:29 final frame. Andres Nocioni scored 26 for Kutxa, Maciej Lampe added 15, and Nemanja Bjelica dropped in 14. Kim Tillie was game-high for UCAM with 29. Bernardo Rodriguez scored 15, J.A. Antelo tallied 13. Laboral squares off against Asefa Estudiantes in Week 33.

No. 3 FC Barcelona Regal: Barcelona Regal took on No. 11 Joventut FIATC in their Week 32 matchup and came out with a big 80:59 victory, to improve their season record to 21-11, one game up on Valencia. Barcelona got 17 from Erazem Lorbek, 12 from Marko Todorovic, and 10 from Alex Abrines. Joventut was led by Corey Fisher’s 12 points and Pere Tomas’ 9. Barcelona Regal will play Lagun Aro GBC in Week 33 and Unicaja in Week 34 while they look to keep their No. 3 position heading into the playoffs.

No. 4 Valencia Basket: Valencia kept their spot as No. 4 in the Liga Endesa with a 93:86 win over No. 13 Blancos de Rueda Valladolid. The win gives Valencia a 20-12 record, one game behind Barcelona Regal, one game ahead of No. 5 Uxue Bilbao Basket and CAI Zaragoza. Blancos outscored Valencia in three of the four quarters of their Week 32 contest, but the turning point of the game was the second frame where Valencia put up 14 in the second with a 33:19 score. Justin Doellman was game-high with 29 points for Valencia, Bojan Dubjevic added 21, and Thomas Kelati dropped in 17. Nacho Martin scored 21 for Blancos, Nedzad Sinanovic added 16, Ian O’Leary dropped in 14. Valencia will take on No. 5 Uxue Bilbao Basket in Week 33.

No. 5 Uxue Bilbao Basket: Bilbao’s Week 32 win over No. 16 Cajasol keeps them in the No. 5 position, with the same record, 19-13, with CAI Zaragoza. They are also one game up on Gran Canaria and two up on Unicaja. They are one game behind Valencia, the club they will play in Week 33. Fran Pilepic led Bilbao with 17 points, Lamont Hamilton added 15 points and 11 rebounds, Axel Hervelle contributed 12. Latavious Williams and Luka Bogdanovic led Cajasol with 13 each, and Rod Blakney dropped in 12. Bilbao will play Valencia next week and will close out the regular season with Blusens Monbus.

No. 6 CAI Zaragoza: CAI Zaragoza got a huge 89:62 Week 32 win over the Liga Endesa’s last place team, No. 18 La Bruixa d’Or. The win improves Zaragoza’s record to 19-13, tied with Bilbao for the No. 5 spot. Zaragoza made quick work of getting a lead over La Bruixa with a 29:15 first quarter. At the end of the first half they held a 46:29 advantage and at the end of the third they were up 76:49. Michael Roll was game-high with 19 for Zaragoza, Chad Toppert added 15 and both Damjan Rudez and Jon Stefansson scored 11. Adam Hanga led La Bruixa with 12 and Nemanja Aleksandros added 11. Zaragoza will play Mad-Croc Fuenlabrada in Week 33 and UCAM Murcia CB to close out the season.

No. 7 Herbalife Gran Canaria: The No. 7 club in the Liga Endesa squared off against No. 17 Lagun Aro, and came out with a 66:59 win to bump their record to 18-14. They are one game behind both CAI Zaragoza and Uxe Bilbao, one up on Unicaja, and two up on Blusens Monbus and CB Canarias. They were in a tight game with Lagun, but put five up on them in the fourth to earn the victory. Eulis Baez was the top scorer for Gran Canaria with 13 and Xavi Rey added 10. Raulzinho Neto led the way for Lagun Aro with 11 and David Doblas added 10.

No. 8 Unicaja: Unicaja sits on the playoff bubble as the No. 8 team and with two weeks left in the regular season are not locked in to a playoff spot yet as they are one game up on both Blusens Monbus and CB Canarias. They next play No. 7 Herbalife Gran Canaria in Week 33 and No. 3 FC Barcelona Regal. They moved into the No. 8 position with the Week 32 win over No. 9 Blusens Monbus. The victory came in the final quarter as they entered the final 10 down three and outscored their hosts 16:23 in the last quarter for the win. Luka Zoric led Unicaja with 16, Andy Panko and Txemi Urtasun both added 14. Levon Kendall paced Blusens Monbus with 18 and Benjamin Dewar added 12.

No. 9 CB Canarias: Canarias moved up two positions with an 81:71 win over No. 15 Mad-Croc Fuenlabrada. The are tied with Blusens Monbus, one game down on Unicaja and one game up on Joventut FIATC. The win marks their fifth With Unicaja’s tough final two weeks, the opportunity to slide into one of the last positions is very good. Canarias will play No. 14 UCAM Murcia in Week 33, but will square off against No. 2 Laboral Kutxa in Week 34. Against Mad-Croc Fuenlabrada Blagota Sekulic was game-high with 18 for Canarias, Levi Rost added 15, and Nicolas Richotti dropped in 13. James Feldeine scored 16, and Sergii Gladyr added 15.