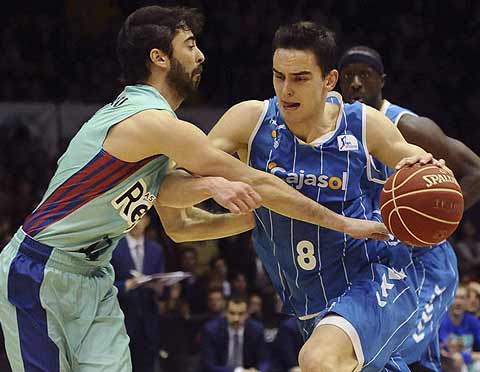 ‘A picture is worth a thousand words…’ Ferran Laviña expresses his feelings during Basquet Manresa’s win over Uxue Bilbao Basket on Sunday.

Liga Endesa No. 1 club Real Madrid and No. 2 club Caja Laboral got back to their winning ways with their Week 26 contests. Six clubs currently in the middle of the standings, fighting for the top eight spots and the league playoffs, lost this week, bringing eight teams within four games of each other. The top four clubs in the standings picked up wins this week, further separating No. 1 and No. 2 and strengthening the positions of No. 3 FC Barcelona Regal and No. 4 Valencia Baskets.

No. 1 Real Madrid improved their record to 24-2 with a 74:85 road win over No. 7 CAI Zaragoza. The loss drops Zaragoza to 14-12 on the season, and in the No. 7 spot all by themselves. Mirza Begic paced the visitors with 20 points, Rudy Fernandez added 18, Carlos Suarez dropped in 12 and Felipe Reyes contributed 10 to the win. Henk Norel and Damjan Rudez knocked down 15 each for CAI, and Pablo Aguilar contributed 13.

No. 2 Caja Laboral killed a two-game losing streak with a solid 88:80 win over No. 17 Lagun Aro GBC at home. The win keeps Caja firmly in the No. 2 position at 20-6, three games up on No. 3 FC Barcelona Regal at 17-9. Caja got 17 points from Andres Nocioni, 15 from Maciej Lampe, 13 from Thomas Heurtel, and 10 from Tibor Pleiss. Lagun was led by Morris Finley’s game-high 19 points. They also got 13 from both Guille Rubio and Ibekwe Ekene, and 10 from Daniel Diez.

No. 3 FC Barcelona Regal made easy work out of No. 15 Cajasol, coming home with a 72:91 win to bump their record as of Week 26 to 17-9, three games out of second and only one ahead of No. 4 Valencia Basket and Uxue Bilbao Basket, both at 16-10. Brad Oleson was game-high for Regal with 16 points. Nathan Jawai added 14 points and 9 rebounds, and Erazem Lorbek dropped in 11. Tomas Satoransky was team-high for Cajasol with 14 points and 5 assists, Rod Blakney added 10 points to the losing effort.

No. 4 Valencia Basket picked up a 68:56 win at home against No. 6 Herbalife Gran Canaria. Valencia’s season record improves to 16-10 (tied with Bilbao Basket for No. 4), while Gran Canaria drops to 15-11. Justin Doellman continues his solid season, this time leading his club to a key win in the Liga Endesa playoff race, with a 14-point performance. Stefan Markovic added 12 points, 5 rebounds, and 5 assists. Spencer Nelson’s 15 points was game-high for Gran Canaria. Xavi Rey added 12 points, and 7 rebounds, and Brad Newley dropped in 10 points.

No. 4 Uxue Bilbao Basket took the toughest loss of the week, falling to No. 18 Basquet Manresa 82:79 on the road. The loss drops Bilbao to 16-10 and in a tie for the No. 4 spot with Valencia Basket. The win gives Basquet Manresa a 5-21 mark after Week 26. Josh Asselin knocked down 20 points and hauled in 8 rebounds to lead Manresa to the win. Troy DeVries added 13 points, and Adam Hanga contributed 9 points and 10 rebounds. Lamonte Hamilton paced Bilbao with 19 points and 5 rebounds. Alex Mumbru and Konstantinos Vasileiadis each scored 13 points and collected 6 rebounds. Mumbru also dished off 5 assists. Adrien Moerman contributed 11 points and 8 rebounds.

No. 8 Blusens Monbus was the only team firmly in the playoff race that put up a ‘W’ during Week 26, at the expense of No. 11 Asefa Estudiantes, 82:71. Monbus improves their record to 13-13 and now shares the No. 8 spot with Unicaja and FIATC Joventut. Asefa falls a game behind the trio into No. 11 with a 12-14 record. Monbus’ Salah Mejri was game-high with 24 points and 8 rebounds. Pavel Pumpria and Andres Rodriguez (7 assists) each had 13 points, Robbie Hummel added 11 points, and Alberto Corbacho dropped in 10. Germån Gabriel was team-high for Asefa with 19 points. Kyle Kuric added 13 points, and Jaime Fernåndez dropped in 10.

No. 8 Unicaja fell victim to a ‘big third quarter’ by their hosts, No. 12 UCAM Murcia CB, and dropped a 76:68 decision. Unicaja held a two-point advantage at the half, then Murcia outscored them 29:14 in the third and then cruised to pick up their 11th win. The loss still keeps Unicaja in the playoff race at 13-13, but it bumps Murcia to a tie with CB Canarias in No. 11 at 11-15. Joe Ragland was high-man for Murcia with 20 points. David Barlow added 12 points and 7 rebounds. Txemi Urtasun equalled Ragland with 20 points of his own. Fran Vazquez added 11 points in the loss.

No. 8 FIATC Joventut also lost out on an opportunity to move up in the standings when they traveled to play No. 12 CB Canarias and fell 71:68. The loss drops Joventut’s record to 13-13 and ties them up with Blusens Monbus and Unicaja for the No. 8 spot in the Liga Endesa. The win improves Canarias to 11-15. Canarias only had one player score in double figures, Blagota Sekulic dropped in 19 points and hauled in 5 rebounds in the win. The hosts did have a balanced scoring attack, as seven players scored 5 or more points. Joventut was led by Corey Fisher’s 28 point, which also turned into an evaluation of 25. Sitapha Savane added 9 points, and 8 rebounds on the night.

No. 14 Blancos de Rueda Valladolid fell to 10-16 after losing 84:74 on the road against No. 16 Mad-Croc Fuenlabrada, who improved to 8-18 with the victory. The clubs battled to single-digit differences in the last three quarters, but the Mad-Croc men put up an 11-point advantage in the first frame with a 26:15 score. The hosts were led by Rob Kurz’s 19 points and 8 rebounds. Sergii Gladyr added 14 points to the win. Valladolid got 15 points from Roman Mantanez, 13 from both Antonio Porta and Nacho Martin, and 11 from Nedzad Sinanovic.