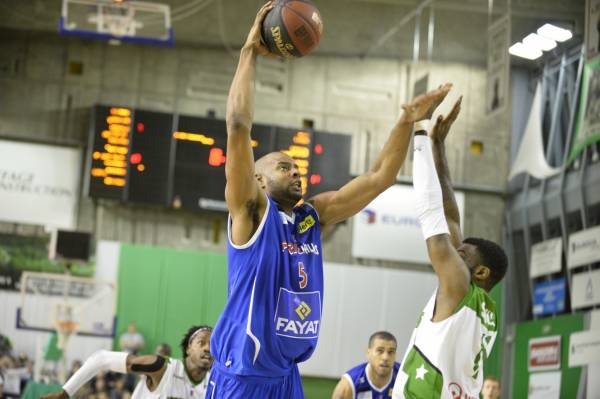 The French Pro A is still only getting warmed up, but Round 2 of the regular season brought plenty of action over the last three days. It is still early days for determining which are the teams to watch this season, but take a look at how the clubs got on over the weekend:

Rouen vs. Pau-Lacq-Orthez, 88-69
Rouen welcomed Pau in the final game of Round 2 on Tuesday and defeated them at home to maintain their unbeaten start to the 2014/2015 French ProA season. The hosts were formidable in the paint, claiming 54 of their points downlow to pace the win. Michael Thompson led the success with 21 points for Rouen as they didn’t lost a single frame through the contest (18-18, 21-16, 25-16, 24-19).

Nanterre vs. Paris-Levallois, 60-71
Paris-Levallois travelled to Nanterre and came away with a second consecutive victory while the downed hosts took their first loss. Sharrod Ford was in fantastic touch for the winners, nailing 29 points and claiming 10 off the glass for a game leading double-double. Nanterre struggled through the first half, gifting Paris a comfortable 32-40 lead, but recovered in the third split to take a one point lead into Q4. However, the visitors had too much and retook the incentive and cruised to victory.

Nancy vs. Bourg, 94-68
Sluc Nancy demolished Bourg on the road during this Saturday evening contest. The hosts were hot from the tip off and used a 30-17 first frame and a 22-11 second to carve a commanding 52-28 lead at the long break. Cruise control was firmly applied in the second half as Nancy eased through the closing twenty minutes and collected its first win of the season.

Entente Orleans vs. Strasbourg
Euroleague club Strasbourg is looking good at the start of the season after downing Orleans easily on the road to go 2-0 at the start of this year’s French ProA. Tadija Dragicevic stood out in the winning effort with 18 points and 8 boards, while David Noel scored 15 points and claimed 8 rebounds in defeat. Strasbourg looked the more organized team throughout and didn’t lose a frame on the way to the win, while the visitors also looked strong off the defensive glass (31 rebounds at the defensive end).

ASVEL Lyon vs. Cholet, 67-56
ASVEL inflicted Cholet’s first defeat of the season while recording their first win on Saturday in a clash billed as the game of the week. The hosts paced well through the opening 30 minutes on the hardwood, taking a 21-13 first, 16-14 second, and a 17-10 third quarter to lead 54-37 lead at the final interval. Cholet hit back to win the fourth stanza, but still fell well short of catching the home team as Lyon eased to the win.

Gravelines-Dunkerque vs. Limoges, 78-81
Reigning French ProA champions Limoges CSP Elite defeated Gravelines on the road to stay unbeaten, but needed to hold on after looking comfortable through the opening half. The visitors were at their formidable best during the first two quarters, and at the midway point led 28-44. However, Gravelines won the third frame 30-21 to make it interesting, also pacing 20-16 through the fourth to make the champs sweat down the straight.

Dijon vs. Le Mans, 80-79
The narrowest closing score of Round 2 saw Dijon sneak past Le Mans by a single point with home court advantage. The victory came courtesy of a monumental comeback with Le Mans sitting pretty through 30 minutes. The visitors won the first half 33-50 (19-20, 14-30) and drew through the third period 22-22. With a 17 point cushion with 10 minutes to play Le Mans collapsed as Dijon found a second wind, crashing the party with a huge 25-7 final stanza. Erving Walker led the Dijon fight back with 28 points.

Chalon Saor vs. Chalons Reims, 89-84
Home court advantage came through as Chalon defeated the team from Reims to hand the club its second consecutive defeat. The hosts shot 22-of-26 free shots (84.6%) to punish the consistent personal fouls from Chalons Reims. The teams traded the first two quarters 28-22 and 23-25 and Chalon Saor edged a very tight second half (18-17, 20-20) to take the narrow win.