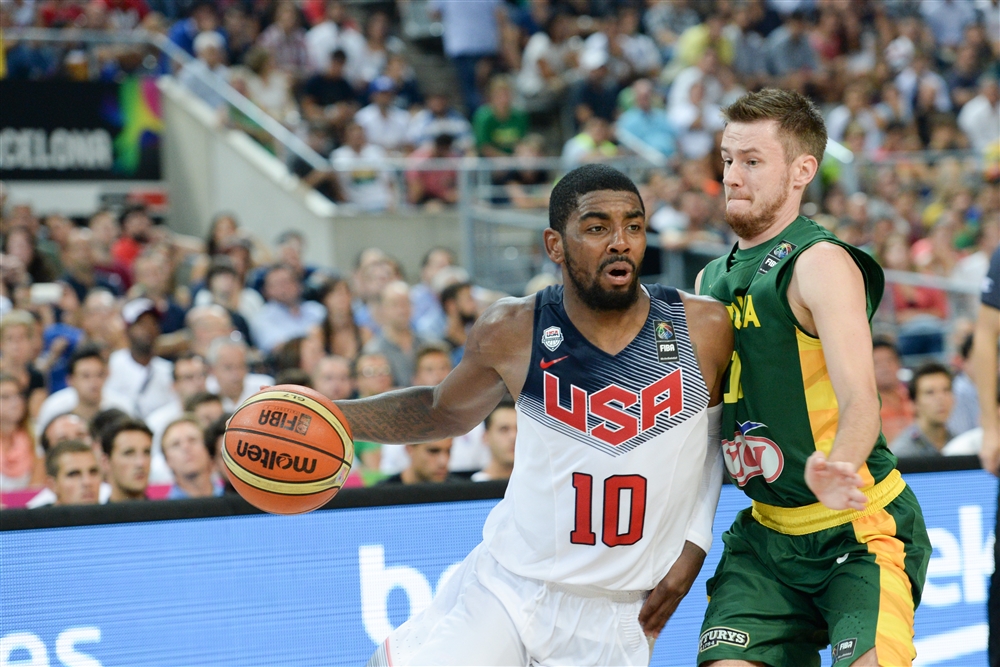 Team USA will get the chance to defend its title at the final of the FIBA World Cup 2014 after swatting aside Lithuania in the first semi-final game on Thursday. The tournament favourites looked classy at times again on the court and is well poised to win back to back World Cup titles during Sunday’s showpiece game. The US will either take on Serbia or France in the tournament decider, but on this evidence are very much the team to beat.

USA vs. Lithuania, 96-68
This USA team does leave space in the defensive perimeter for teams to pick up points, but this FIBA World Cup 2014 run has been built on consistent scoring. That was in evidence against Lithuania again, and while the Europeans had plenty of their own chances, the US buckets fell constantly to pace the win. The favourites topped Lithuania with 44 rebounds, 14 coming at the offensive end, but 30 in D, keeping the European team from taking many second chances.

First quarter
Jonas Valanciunas opened the scoring with the first bucket of the game to give Lithuania a 0-2 lead, but the US responded through Anthony Davis for 2-2. Adas Juskevicius and Kenneth Faried traded 100% from the charity strip, before the teams exchanged scores through the middle of the quarter. Lithuania came out at the end of that streak with a 10-11 lead courtesy of a couple of frees by Valanciunas in response to Klay Thompson’s opening triple of the game. Martynas Pocius made a layup before the US struck a second consecutive from beyond the arc, this time from Kyrie Irvine (13-13). That sparked a run as Thompson struck again from downtown and Derrick Rose capped an 8-0 streak from the line (18-13). Darjus Lavrinovic sunk Lithuania’s first trey of the game, but the US maintained their advantage for the remainder of the first to lead 21-16 at the opening break.

Second quarter
Stephen Curry was sent to the line at the opening of the second quarter and made two from two free shots (23-16). Mindaugas Kuzminskas dunked to get the Lithuanian contingent fired up in Q2, but Faried buried a deuce to reclaim the deficit (25-18). Kuzminskas laid up, but the USA again responded as Curry nailed from downtown to extend the lead to eight points (28-20). Kuzminskas was keeping Lithuania in the game during the second frame and he doubled up free throws to make it 28-22, but there was always an answer from the American attack. Thompson scored the next four points of the game to make it a ten point game at 32-22, team USA was proving adept at staying one step ahead. Kuzminskas scored another six points through the stanza, taking his second quarter to 12 points, but it was not enough to stop the US. Key men in the roster propelled the defending champs to a 43-35 lead at the long break.

Third quarter
James Harden extended the scoreboard back to a double digit deficit at the start of the third stint, securing a layup score at 45-35. The US was turning it up a notch and moving through the gears as Curry hit from beyond the arc, Davis laid up, and Harden struck from the field. The result was a 10 point run at the start of the third quarter that handed the USA a commanding 53-35 and knocked the confidence of their opponents. Lithuania registered its first buckets of the half thanks to Renaldas Seibutis hitting 100% from the line, but again the US responded, this time with another 8-0 run that included an alley-oop score from Davis and a slam dunk from Irving. The Europeans finally found some consistent net during the closing of the third frame, but Team USA had swamped the hardwood and won the quarter 33-14 to lead 76-49 at the final split.

Fourth quarter
A beleaguered Lithuania opened the fourth quarter account courtesy of a Pocius layup, before Davis registered the USA in Q4 with a jumper. Kuzminskas got back to scoring ways, and his 2 pointer and a triple from Pocius sandwiched a layup from Irving (80-56). An 8-2 run from the leaders extended the deficit to 89-58 with just four minutes of regulation time left. Lithuania outscored their opponents down the stretch but still lost the quarter and lost heavily to a USA team that is going to be hard to beat during Sunday’s final.

Irving led a slew of US players scoring in double digits with 18 points, followed by Thompson and Harden with 16 apiece, and Curry with 13 points. Rudy Gay collected 7 rebounds in success, while DeMarcus Cousins, Davis, and Faried all registered 6 boards.

Kuzminskas was a driving force for Lithuania with 15 points (he also collected 9 rebounds) from the bench and was joined by Valanciunas on that total (15 points and 7 rebounds) for the losing effort. Adas Juskevicius scored 12 points for the downed team, while Pocius nailed 10 points.