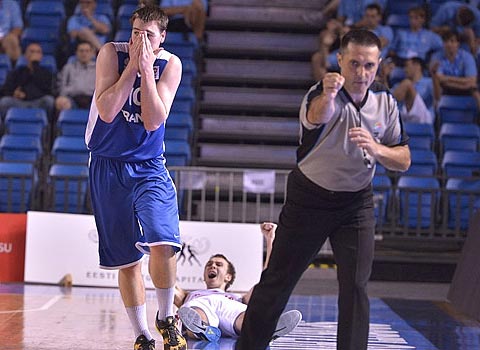 Amedeo Della Valle is mobbed by his Italian teammates after hitting a triple to break a tie at the end of their contest with Spain.

The first two quarterfinal slots in the FIBA Men U20 European Championship have already been determined as both Greece and Latvia can’t finish lower than fourth in their respective groups. Both clubs came into the second round with perfect 4-0 records and won their first second round match on Monday, to sit 3-0 with two games remaining in the round. In Group E, should Greece lose both of their remaining games and end up 3-2, they still will beat Croatia (0-3) if they win their remaining contests and finish 2-3, and they beat Germany (1-2) in a tie break because of beating them in the first round. Should Montenegro (1-2) beat Greece and Germany and finish in a 3-2 tie with Greece, Germany would have dropped to fifth, so Greece would finish fourth. In Group F there are four teams that are 1-2, Italy is 2-1 and Latvia is 3-0. Should Latvia loose to Italy and France, they are still moving on since they have already defeated Slovenia (Monday), Spain (1-2) and Russia (1-2) in round one. If they end up 3-2 and France wins their last two, there’s no way two other teams can overcome the tie-breaks and knock the Latvians out.

In the first game of Round 2 in Group E, the closest was six points, with Germany beating Turkey 71:65, then came Lithuania downing Montenegro 63:56, and finally Greece defeating Croatia 77:68. Things were a bit closer in Group F with Italy stopping Spain 76:73, Russia getting a win over France 65:61, and Latvia picking up their fifth win of the tournament beating Slovenia 78:72.

Group E
Lithuania – Montenegro, 63:56
Montenegro had the lead with 5:34 to play against Lithuania on Monday, but an 11:0 run turned the game around for Lithuania, who now sit in second place in the group at 2-1, one game behind undefeated Greece. Montenegro drops to 1-2, tied with Germany for fourth place.

Montenegro opened the contest with a 17:5 advantage, then picked up another point in the second to head into the break up 34:21. Lithuania pulled six back in the third to head into the final frame down 48:41. Montenegro hit the first two of the fourth to get up 50:41, then Lithuania dropped the four to cut the lead to five, 50:45. After exchanging baskets, Montenegro hit their last basket at 5:34 to bring the score to 56:52. From there on out it was all Lithuania as the Montenegro men couldn’t find the bottom of the cords again. By the time the final buzzer sounded, Lithuania had run off 11 and were on top 63:52.

Greece – Croatia, 77:68
Greece grabbed their spot in the quarters on the strength of a 16:0 run in the second quarter over Croatia, while adding points to their overall lead in the game in each quarter. Coming into the second round with a 4-0 record and now at 5-0 the Greek contingent can finish no lower than fourth and will move on. Croatia drops to 0-3 and will have to win their last two games against Germany and Lithuania and get some help to move on.

Germany – Turkey, 71:66
The Germans built a 37:29 lead at the mid-game break over Turkey and held on in the second half to pick up their first win in Group E. Turkey dropped to 2-1, carrying over two wins from the first round and blowing an opportunity to lock up a spot in the quarters. They’ll get another shot at it on Tuesday with a contest against Lithuania, who’s also looking for their seat at the table. It doesn’t get any easier for the Turks as they conclude round two with a match-up with undefeated Greece, while Lithuania has Croatia (winless in Group F).

Bogdan Radosavljevic lead the Germans with a game-high 19, and got 12 rom Leon Tolksdorf and 10 from Kenneth Ogbe. Ramazan Tekin dropped 15 for Turkey.

Group F
Italy – Spain, 76:73
Things were a bit tighter on the court in Group F matches, with Italy sliding by Spain 76:73 to improve to 2-1 after coming in to the second round with a 1-1 record (along with three others). Spain, another club that started round two at 1-1, drops to 1-2.

The two clubs battled to a 37:35 halftime score with Spain on top. In the third, the Spaniards took control and ran up six points on a 22:16 score, to head into the final frame up eight, 59:51. Italy knocked down a three-ball to open the fourth, only to have Spain counter. Another long-ball from Italy cut the margin to five. Six points later, at the end of an 8:0 run by the Italians, and the score was 65:64, with just under five minutes to play. Italy built as much as a six point lead, only to have Spain fight back to within a point, 71:70 with just under two minutes left. The final 43 seconds decided the contest with Amedeo Della Valle grabbing an offensive rebound and dropping a jumper after running the clock down to 24, to put Italy up 73:70. Jaime Fernandez knocked down a triple for Spain with 15 seconds left to knot the score at 73, only to have Della Valle slice the cords with his own long-ball with six seconds on the clock to put the Italians up three, 76:73 as time ran out.

Della Valle was game-high for Italy with 27 and Michele Ruzzier scored 12. Daniez Diez hit 20 for Spain and Fernandez dropped in 13.

Latvia – Slovenia, 78:72
Latvia got a huge second quarter in outscoring Slovenia, 20:11, to build a lead that couldn’t be overcome and improve the Latvian contingent to a perfect 5-0 for the tournament, securing a seat in the quarterfinals. Slovenia drops to 1-2 and will face Russia next, followed by Spain on the final day.

Russia – France, 66:61
Russia used a 17:10 final quarter to come from behind against France and pick up their first win, 1-2, in Group F. France drops to 1-2 and knots up the last four teams in the group at identical records.

France took a 51:48 advantage into the final 10 and while Russia hit the first points of the quarter just over a minute into getting back on the court, France then hit two consecutive deuces to go up five, 55:50. Russia countered with four unanswered to pull within one, 55:54. For the better part of the quarter they exchanged baskets and had tied things up at 61 with a minute and 25 seconds to play. France wouldn’t see their score change again, while Russia dropped in a lay-up and then hit a pair of free throws with seven seconds to play to ice the game, 65:61.

Menu U20 European Championships – Round 2