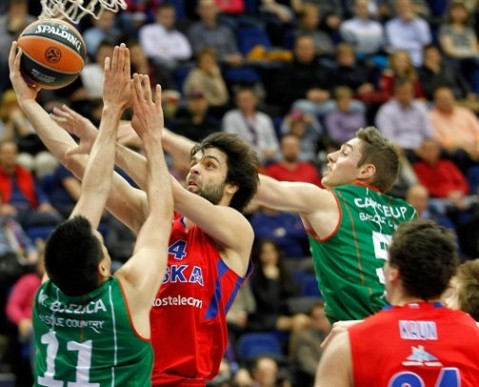 The main strategy for Game 1 of the Euroleague quarterfinals was simple, just be the home team… Technically, that meant being the top seeded team, so there was some work involved, but the common thread was that the winners and those that currently hold 1-0 records in the four, best-of-five, quarterfinals series, were all clubs that were fortunate enough to pick up their first win in front of friendly crowds.

The teams will remain in the same cities for game two, with games three and four, if necessary, moving to the other city. Should a game five be required in any of the series, they will return to the higher seed’s arena and finish.

Game two for Barcelona vs. Panathinaikos will be held on Thursday, with the rest to be contested Friday.

CSKA Moscow – Caja Laboral, 89:78
CSKA Moscow grabbed a 1-0 lead over visiting Caja Laboral with an 89:78 victory on Wednesday. The win gives the Russian club a 12-1 home Euroleague playoff mark. CSKA also tied a Euroleague record for the most team assists in the playoffs with 25.

CSKA got out to an early 15:6 lead after a 7:0 run, and closed out the first quarter up 26:19. In the second they used solid defense and some timely shooting to extend their lead to 15, with a 50:35 advantage at the half.

Fresh off the break, Sonny Weems knocked down consecutive triples to put the hosts up by 21. Caja worked to cut the deficit, and after a 0:6 run mid-way through the quarter, they had got it back to 16. Later in the quarter they had whittled it to 13, but they ended up right back where it began, 15-points, at the end of the third, 73:58.

Early in the final 10 CSKA had built a 22-point advantage, 82:60, but Caja wasn’t planning on going anywhere and keep chipping away at the lead. They went on a 7:18 scoring run to close out the contest, but still came up 11 points short, giving CSKA an 89:78 win and a 1-0 lead in the series.

Olympiacos – Anadolu Efes, 67:62
Euroleague defending champions Olympiacos Piraeus outlasted a scrappy Anadolu Efes club to take a 1-0 lead in their best-of-five series. During the contest, there was never a lead that reached double digits. Game two of their series will be played on Friday, also in Peace and Friendship Stadium, then they will move on to Istanbul for games three and four, should game four be necessary.

The bulk of the first quarter belonged to Efes, as they either held the lead or the score was tied. Olympiacos got their first lead at 14:13 and closed out the first 10 with a triple, while Jordan Farmar rocked the backboard with a power dunk off a fast break to bring the score to 17:15.

Each club had their opportunity to run up the score a bit as the hosts were able to get up by nine, 32:23, right before Efes switched defenses and shut down the defending champs, then ran off 10 points of their own before the horn sounded sending the clubs to their mid-game chalk-talk with Olympiacos holding on to a one-point lead, 33:32.

After battling for the better part of the third quarter, Olympiacos built a small advantage off solid inside play, especially cleaning up on the offensive boards resulting in put-backs. By the end of the third quarter the hosts had extended their lead to four, 50:46.

The home club’s advantage grew to as much as seven deep into the contest, but a four-point rally by Efes, cut the lead to three with 24 seconds to play. Again, an offensive rebound, this time by Kyle Hines, was the turning point as Hines was able to secure an offensive rebound and kick the ball Vassilis Spanoulis, who was fouled. His two singles iced the game for Olympiacos, 67:62.

Olympiacos only had one player in double figures, Georgios Printezis was top scorer in all games during Game 1 with 26 and finished second in the MVP chase to Real Madrid’s Rudy Fernandez. Printezis finished with a PIR of 20, Fernandez earned the crown with a PIR of 22. Spanoulis tallied 9 points, 6 rebounds, and 8 assists.

Efes was led by Kerem Gonlum with 17 points and 5 rebounds. Jamon-Alfred Lucas added 10 points and 6 assists.

Maccabi got out to the early lead in the contest, finishing the first frame with a 14:23 advantage.

The second frame was a disaster for the Israel club, even after opening the second 10 with the first points, a triple to extend their lead to 12. The guests would only score one more point in the quarter, but Madrid rolled to tally 24. By the time the buzzer sounded, Madrid had turned their 12-point deficit into an 11-point lead, 38:27.

The hosts scored first out of the locker room and then Maccabi’s Shawn James threw down a dunk to close off a 10 minute field goal drought for the guests. Maccabi was able to cut the margin to eight mid-way though the third, but Madrid rallied and extended their lead back to 18, settling for 16 at the horn, 59:43.

James and Ricky Hickman scored 9 points each for Maccabi.