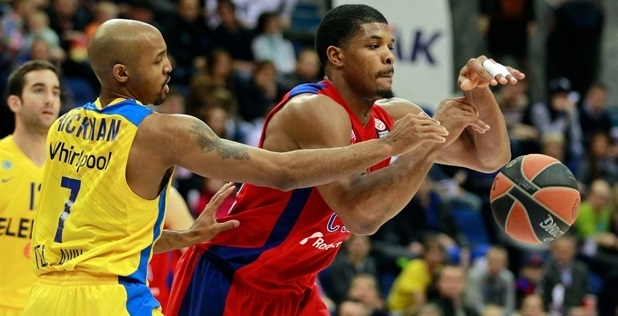 The Top 16 of the Euroleague reached its halfway stage this week as Round 7 of this second stage brought high scores and authoritative displays from some of the tournaments favourites. There were plenty of feisty encounters and there were even three all country meets this week, including some of the most mouth watering derby games in the competition.

Group E
Barcelona remained the only undefeated team in the Top 16 after seeing off Laboral Kutxa Vitoria 68-80 on the road. This clash between the two Spanish clubs saw Barcelona lead for much of the game to extend the clubs Top 16 win streak to 19 games. The Catalan club now sits top of Group E with a 7-0 record, while Vitoria stays last at 1-6. Full Game Report

The Athens Derby descended on the Euroleague this week as Panathinaikos played host to great rivals Olympiacos. The Greens scraped through 66-62 in what was an extremely close game where no team led by more than four points. Current Euroleague champions Olympiacos run out of steam in the fourth quarter and the club now slips to fourth with a 4-3 record, locked with EA7 Milan in third and Panathinaikos in second. Full Game Report

EA7 Milan kept in the hunt for the next round with an impressive 70-59 home win over Unicaja Malaga. The Italian hosts moved to third place to share second place with the two Greek giants at 4-3, while Malaga dropped to 5th with a 3-4 record. The hosts led for most of the contest as the Spanish visitors continue to go through inconsistent form in Europe.

There was an all Turkish clash in Group E on Friday as Fenerbahce visited Anadolu Efes and came away with a 63-71 win. The Istanbul Derby was complete with the usual high stakes basketball and raucous crowd inside the Abdi Ipecki Arena. Bojan Bogdanovic kept up his form for Fener with a game high 17 points and the visitors claimed victory. Fenerbahce is on the road to recovery after a shaky start to the Euroleague Top 16 and the club has now moved to 6th with a 3-4 record after winning three on the bounce. Fener´s climb up the table was at the expense of Efes, with the Turkish club slipping to 7th.

Group F
CSKA Moscow hit 100 points on the way to comfortably seeing off Maccabi Electra Tel-Aviv 100-65 in Russia. In a clash between two of Europe´s giants a tight game was expected, but CSKA laid down a serious message that will be seen all around the continent. Milos Teodosic nailed 22 points for the winning effort to send Moscow top of Group F with a 6-1 record. Tel-Aviv suffered its second worst Euroleague defeat but remains in the hunt in third place with a 5-2 record.

Real Madrid bested CSKA by scoring 108 in a sweeping win over an overwhelmed Zalgiris Kaunas (108-72). On this evidence Los Blancos are the team to beat, although CSKA could well prove that not to be the case. Madrid put together a phenomenal team effort that saw the club pick up the highest ever performance index rating in the Top 16 history, 151. The Spanish club holds the same 6-1 record as Moscow at the top of the group, while Zalgiris sits last with 1-6. Full Game Report

Bayern Munich welcomed Lokomotiv Kuban to Germany in a clash between two of this season´s debutants. Both Bayern and Lokomotiv have been surprise packages this season, but it was the German team that snatched an 82-79 win. It could have been different for the hosts as Bayern trailed by 19 points in the second quarter. However, Lokomotiv lost intensity and the home team roared back with an 11 point run and six free throws in the dying seconds to take an unlikely win. Munich now moves to fourth at the expense of Kuban, with the Germans on 3-4 and the Russians on the same record in fifth place.

Galatasaray poured in 12 triples on the way to beating Partizan NIS Belgrade 70-78 on the road. The Turkish team built success on the back of a 4-19 second quarter streak, while Henry Domercant and Carlos Arroyo combined for 34 of the visitors´ points. Galatasaray remained in sixth place with a 3-4 record, while Partizan stayed in seventh with a poor 1-6 record.