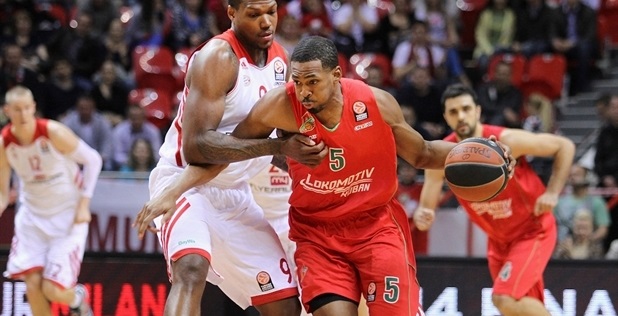 The Euroleague Top 16 is complete and the competition now turns to the knockout phase as the best teams gather to continue on the road to the Final Four. The Top 16 has served to collect the elite clubs on the continent, and it is them who will go toe to toe when the Playoffs get underway later in the month.

FC Barcelona vs. Laboral Kutxa Vitoria, 86-97
The records have been snapping for Barcelona recently as the club closed out the Top 16 campaign quietly. Of course, the Spanish giant had already done enough damage to qualify early and has rotated the roster since. Nevertheless, Barca crashed to defeat against a resurgent Laboral Kutxa to end a 31 game Top 16 home winning streak, a record in the Euroleague. As for Vitoria, it has proved too little too late and the club crashed out of the competition despite winning its last three games.

The visitors used a 0-18 third quarter run to take the initiative and cruise through the fourth to the win. Barcelona´s Juan Carlos Navarro proved that even as a veteran he has what it takes by scoring 25 points, including his 500th three point score.

Fenerbahce Ulker Istanbul vs. Anadolu Efes, 84-67
A typically ferocious Istanbul Derby saw Fenerbahce close its Euroleague campaign for the season by crushing the also eliminated Efes. Fener will look back on this competition with regret, after playing so well during the Regular Season injuries took their toll in the Top 16. 17-year old Berk Ugurlu was playing his debut for Fenerbahce and managed to impress with 12 points, trailing pace setter Luka Zoric with 20 points. Efes struggled throughout the game and the loss meant the club props up Group E at the end of the Top 16 with a 2-12 record.

Olympiacos vs. Panathinaikos, 68-65
Olympiacos scraped a win in an Athens Derby to remember. Whether The Reds deserved the victory is open to debate as Panathinaikos looked the better team for much of the game. However, the reigning champs dug deep when it counted and current Euroleague MVP Vassilis Spanoulis stepped up with a winning triple with 0.5 seconds on the clock. Both Greek giants had already qualified for the playoffs.

Unicaja Malaga vs. EA7 Armani Milan, 95-85
A hugely impressive Top 16 ended in slight disappointment for Italian club EA7 Milan as they were beaten by Spanish outfit Malaga. However, the loss is unlikely to dampen the spirits of Milan as the team surprised many throughout this phase and easily qualified for the playoffs. Despite a solid showing again tonight from Unicaja, the Spanish club just misses out on that coveted fourth spot. Malaga used an 8-0 run in the second frame and an 11-0 run in the third to secure a win to end its own Euroleague season on a high.

Zalgiris Kaunas vs. Real Madrid, 87-80
Zalgiris collected one of the surprise results of the Top 16 by gunning down Spanish giant Real Madrid at home. It was only the third loss inflicted on Los Blancos this season and it was dealt by the team with the worst record in the Top 16. Justin Dentmon was sensational for the winners and picked up a huge 36 points and broke a Euroleague record for the most triples in a season, 74. Dentmon rescued Kaunas with 13 points in the last seven minutes to secure a win from a losing third quarter position. The result also decided 1st place in Group F as Madrid fell to second place behind CSKA.

Maccabi Electra Tel-Aviv vs. CSKA Moscow, 76-81
Speaking of CSKA, the Russian club traveled to Israel and come away with a win over Tel-Aviv. This clash of two former Euroleague winners went to the wire, but Moscow emerged from one of the hardest road fixtures to top Group F with a 12-2 record. The game was tied heading down the final stretch, but CSKA moved ahead for the rest of the game thanks to Aaron Jackson, who topped the scoring with 18 points.

Galatasaray vs. Partizan NIS Belgrade, 64-55
Turkish club Galatasaray scraped through to the playoffs by defeating Partizan NIS in the remaining playoff berth up for grabs in Round 14. In the end the club only progressed by a points difference of just 7 over Russian debutants Lokomotiv. The hosts drew the third stanza and lost the fourth in a shaky second half, but a solid first period proved to be enough, despite the nerves inside the Abdi Ipekci Arena.

Lokomotiv Kuban Krasnodar vs. Bayern Munich, 84-75
Lokomotiv did not fall over the final hurdle and managed to beat Bayern Munich to keep the clubs´ playoff hopes alive. However, Galatasaray´s win over Partizan eliminated the Russian club. This clash between two Euroleague debutants was a quality match up that produced fine Basketball throughout the game. Lokomotiv will look back on this Euroleague campaign fondly and the club was mere points from making the playoffs. Bayern´s own debut season in the Euroleague has proved successful, and the German club will surely look for future forays into Europe´s premier competition.