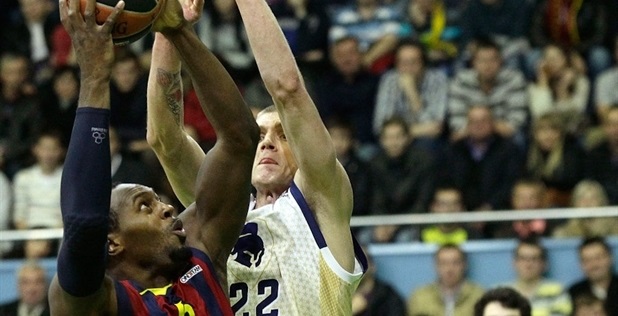 The second night of Euroleague Round 5 action in the has finished and it was a night in which Maccabi Tel Aviv downed old rivals Panathinaikos at home. Thursday featured some of the closest matches in recent weeks as Barcelona continued to find consistency with a road win over Kiev and Kuban narrowly defeated Kutxa at home.

Elsewhere around the continent, Fenerbahce continued to look imperious in this season´s competition by brushing aside Nanterre in Istanbul. Other games on the night saw Zalgiris claim a win over Brose Baskets and Siena recorded a vital first win in a close game against Malaga.

Fenerbahce – Nanterre, 83-66
It was another cruising win for the Turkish powerhouse on Thursday night as the team once again cemented its position as one of the favourites for the Euroleague. The Istanbul club also cemented its position at the top of Group A with a 5-0 record, the best start Fener has had to a campaign this century. Nanterre comes crashing back to Earth after two consecutive wins, but the French club has a record of 2-3 and sits fourth in a tough group.

The home team got off to a quick start in front of 12,000 fans and during the opening quarter opened up a lead of 23-19. In the second 10 minutes the Turkish giant pushed on as Nanterre struggled to keep up with the pace; by half time Fenerbahce held a lead of 44-32. That 12 point cushion heading into the second half never looked like being reduced by the French visitors, although Nanterre did claim the third period by 18-14. Fener responded in the last section by downing 25 points to Nanterre´s 16 to take another comfortable win.

Bojan Bogdanovic top scored for the hosts with 20 points, while Nemanja Bjelica hit 15 points and claimed 6 rebounds. Gasper Vidmar was on hand with 9 rebounds and Emir Preldzic netted 16 points.

Ali Traore was the stand out for Nanterre with 20 points with Will Daniels hauling in 13.

Budivelnyk Kiev – FCB Regal, 74-84
Barcelona continued to bounce back from two disappointing Euroleague defeats with a tighter than on paper thrilling victory over Budivelnyk in Kiev. The win takes Barcelona into second place in Group A with a 3-2 record while Kiev slips to the foot of the table with 1-4.

Ante Tomic continued his impressive Euroleague form by pacing Barcelona in the opening stages and netting the first 8 points for Barcelona, while the home team kept the scores tight. However it was the Spanish visitors who would claim the first quarter with a narrow 21-24 lead. In the second quarter Barcelona opened an early 5 point cushion before Kiev responded with a solid 10 minutes that sent the home team in at half time with a slender 48-46 lead. Barcelona shored up defensively after the break while Tomic continued to reel off baskets, but going into the fourth the game was narrowly poised with Barca holding a slender 56-58 lead. In the final stanza Barcelona hit 8 points without reply to take control of the game and eventually recorded a 10 point victory.

Juan Carlos Navarro was in typically dangerous mood as he recorded 15 points, 7 assists, and 5 rebounds. Maciej Lampe added 7 rebounds to his 12 points haul, while Bostjan Nachbar took 11 points for Barcelona.

Darjus Lavrinovic put in a game high 21 point shift and 7 rebounds for Kiev and was backed up by Blake Ahearn and Dajuan Summers with 14 points apiece.

Maccabi Tel Aviv – Panathinaikos Athens, 75-68
Old Euroleague rivals Tel Aviv and Panathinaikos clashed in Israel in what was the pick of Thursday´s games. The home team sunk the visitors from Greece to claim a fourth successive win to go 4-1 at the top of Group D. Panathinaikos continues to struggle both domestically and on the continent as the team slips to 2-3.

Indeed, The Greens struggled from the off against Tel Aviv as the home side set about the visitors during the opening plays. The Israeli giants shut out the Greeks at the back and put on some storming offense to win the first 10 minutes comfortably to lead 25-12. Panathinaikos woke up in the second period and traded blows with Tel Aviv for much of the quarter until both teams found the halfway buzzer with the scoreboard reading 36-29. The hosts started the second half on the front foot and it took Panathinaikos 3 minutes of the third to get on the board, ultimately resulting in a score of 56-47 heading into the fourth quarter. Nikos Pappas got the visitors within six points early in the last 10 minutes, but Tel Aviv replied by shutting out the Greek giants for six minutes from the field to close a relatively easy win.

David Blu was the pick of the bunch for the winners and claimed 14 points and 7 rebounds. He was aided by Joe Ingles with 14 points, Ricky Hickman with 13, Shawn James with 12, and Devin Smith with 10.

Stepahne Lasme kept Panathinaikos ticking with a 13 point, 7 rebounds, and 6 blocks (a career high) game. Also on hand for The Greens were Nikos Pappas with 12 points and Antonis Fotsis with a solid 8 points and 7 rebounds.

***
Other results from the Euroleague Round 5, Thursday