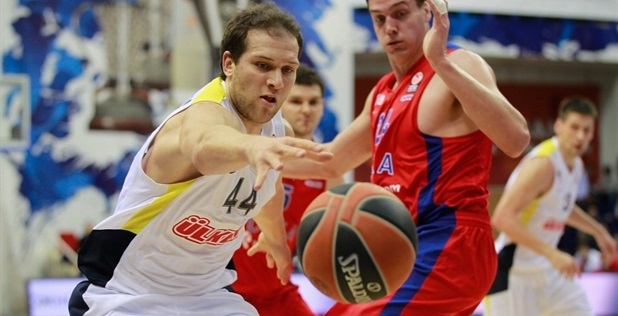 With the Regular Season now nearing its end, it is a time when the Euroleague groups are taking shape and on Friday one group was put to bed. All that remains in Group D is the formality of Rounds nine and ten as the four qualifying teams have been sent through after Panathinaikos and Laboral Kutxa both picked up home wins to head into the Last 16.

Group A is still proving to be a fascinating watch, as we suspected it would be with giants Fenerbahce, Barcelona and CSKA Moscow all involved. On Friday Fenerbahce defeated CSKA on the road while FCB Regal came through a tough match against Nanterre.

There is still plenty to play for in Group B as Efes fell to Brose Baskets at home, although all teams are fighting for second after Real Madrid´s dominance in the group.

CSKA welcomed Group A leaders Fenerbahce to Moscow on Friday evening and it was a close game between two of the Euroleague favourites. Turkish club Fenerbahce has been one of the form teams this season, but fell to a defeat last week to Barcelona. Fener responded by taking out CSKA on the road and staying in first place with a 7-1 record, while Moscow stays in third with a 5-3 record.

Both teams have already qualified for the Last 16 but there was plenty of pride at stake and the game could play a part in any future clashes between the two this season. The visiting team was eager to bounce back from last week´s loss and got the better of the opening 10 minutes to lead 17-19 after Q1. CSKA responded with the backing of the home fans early in the second to go on a 10-0 run, but Fener kept pushing and getting offense and defense in rhythm and led at the midway stage 35-41. The Turkish team looked good during the first half but the hosts had remained within touch and during the third seized the initiative and claimed a buzzer beating basket from way downtown to lead 59-56 after 30 minutes. Both teams took the lead throughout the last period but it was Fenerbahce who managed to emerge victorious after a hard fought game.

Barcelona already qualified for the Last 16 a week ago, but with Nanterre yet to secure qualification the Spanish team was made to work hard for this victory away from home. The win pushes Barca to 6-2 and second place in Group A, while Nanterre is still favourites for the 4th Last 16 spot with a 3-5 record in fourth place.

Nanterre had shocked Barcelona earlier in the Euroleague by grabbing a victory in Barca´s back yard, so revenge was definitely on the mind of the visitors. However, the French team has plenty to play for and the hosts managed to claim a lead of 19-17 after 10 minutes of play. In the second quarter Nanterre slipped and let Barcelona carve out a lead that was to prove the difference come the end of the game, Barcelona led 37-47 at halftime. The home team won the third quarter 20-19, but Barcelona managed to keep pace and led 57-66 after the third. The French side also won the fourth 21-16 to claim three of the four quarters, but paid for that poor second period and lost the game.

Juan Carlos Navarro led the way for Barcelona with 15 points and also moves to second place on the Euroleague’s all-time foul-shooting list. The veteran was helped by Maciej Lampe with 14 points and Alex Abrines with 13 for Barcelona, while Ante Tomic grabbed 9 points, 8 rebounds, and 3 assists.

Laboral Kutxa joined fellow Spanish clubs Real Madrid and Barcelona in the Lat 16 after turning it on in the second half to defeat Lietuvos Rytas Vilnius. Vitoria remains in third place in Group D with a 5-3 record, while the terrible Euroleague campaign for Vilnius continues and the team now has a 1-7 record at the foot of the table.

In a close first quarter both teams were hard to separate as the score stayed tight throughout, although by the end of the period the hosts held a slender 18-17 lead. In the second quarter Lietuvos Rytas found a new lease of life and put together a fantastic period which led to the visiting team holding a 30-38 halftime lead. With qualification on the line for Vitoria the team responded in the third and began turning around the game to carry a 53-49 advantage into the last 10 minutes. A 10-0 run for the Spanish hosts all but finished the game and from losing by 8 point at halftime Vitoria won by 16 at the final buzzer.

Lamont Hamilton paced the winners with 17 points, and was backed up by Fernando San Emeterio with 12 and Milko VBjelica with 11 points for Laboral.

After a very patchy Euroleague season, Greek giants Panathinaikos finally booked a passage into the Last 16 and in doing so claimed the last qualification place in Group D. The former champions now sit fourth in the group with a 4-4 record. Due to the loss Zvezda was eliminated and has a 2-6 record in fifth place, although the team will move to the Eurocup Last 32.

A high octane first quarter saw both teams fight it out for the lead and trade baskets for much of the period. By the end of the quarter the visitors had claimed an early but small advantage, leading 20-21 after 10 minutes. The match remained a close affair throughout the second quarter, but the Greek team did claim the lead at the halftime break with the scoreboard reading 37-34. A low scoring third period saw Panathinaikos 15 points to Belgrade´s 14 to lead 52-48 after half an hour. While things remained tight throughout the fourth, the hosts managed to post a six point cushion late on to all but seal victory and qualification to the Last 16.

DeMarcus Nelson also had a good all round game with 15 points, 5 rebounds, and 5 assists, while Rasko Katic scored 13 points and Blake Schilb 10.