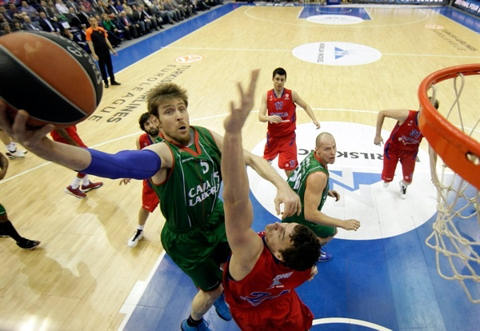 After Thursday’s thrilling last second Euroleague win by Panathinaikos over top ranked Barcelona Regal that evened their series at one game each, Friday’s contests were all won by the home clubs to bring those three series to 2-0 and within one game of moving on to the semifinals.

Game 3 will start on April 16th or 17th, with Panathinaikos and Regal being forced to play at minimum a Game 4.

CSKA Moscow vs. Caja Laboral, 90:68
CSKA pulled to within one win from the Euroleague semifinals with a huge 22-point win over Caja Laboral, 90:68. The series now shifts to Victoria for Game 3, where CSKA will look to wrap it up, while Caja hopes to pick up a win to keep fighting.

The first quarter belonged to the guests, as Caja built a 12:21 lead deep into the frame. CSKA rallied a bit and cut the lead to six, 20:26 as the first stanza wrapped up.

The second and third quarters are where the hosts dominated. CSKA opened the second with seven unanswered, which gave them a 9:0 run that bridged the quarters. A 15:2 scoring run gave the hosts a 42:33 lead late in the second. Caja closed the gap before the half ended, heading into the dressing rooms down seven, 44:37.

The final frame was no time to rest for the hosts as they pushed the lead up to 27, before settling in to a 22-point margin and a 2-0 lead in the series.

Victor Khryapa lead CSKA and the Euroleague in Game 2 with 9 points, 9 rebounds, 5 assists, 2 steals and a MVP earning PIR of 25. The trio of Sasha Kaun, Nenad Krstic and Zoran Erceg dropped in 16 points each. Milos Teodosic contributed 14 points, 6 rebounds, 7 assists and a PIR of 22.

Olympiacos vs. Anadolu Efes, 71:53
The defending Euroleague champions, Olympiacos Piraeus, moved to within a single game of booking their tickets to London and the Final Four with a strong 71:53 victory over Anadolu Efes. The series will now move to Istanbul for Game 3 and should Efes be victorious in that, Game 4 will also be played in Istanbul.

Efes got out to an early and decisive lead, building a 2:12 advantage. The guests leading scorer in the first contest, Kerem Gonlum, got the scoring going early, but also found himself in foul trouble after committing to personals in the first two minutes. The hosts were able to counter the early run, but couldn’t get the lead before the buzzer ended the first 10, they found themselves down 14:16.

The hosts tallied first in the new quarter to take the lead and then added to it to get up by five, 23:18. Efes knocked down the next two jumpers to pull within one, but Olympiacos was able to string together a 12:2 series to get up 35:24. Gonlum closed the half with a lay-up, bringing the score to 35:26.

The Reds used a 10:0 run mid-way through the third to build a 15-point led, only to be countered by six unanswered by Efes to then cut the lead to nine. A buzzer-beater by Kostas Sloukas game the hosts a 52:39 lead heading into the final 10.

The defending champs opened the fourth with two triples, a dunk and a layup, to get up by 21. The clubs exchanged baskets for the rest of the quarter with Olympiacos coming out at the end with an 18-point lead, 71:53, and a 2-game advantage in the series.

Real Madrid vs. Maccabi Electra, 75:63
Real Madrid lead tip to buzzer in Game 2 of their best-of-five series with Maccabi Electra to take a 2-0 lead into Tel Aviv next week for Game 3. Should Game 4 be necessary, that will also be played in Israel.

Madrid scored first and never gave up the lead, getting up by as many as 10 during the first 10. The hosts held an 18:13 lead at the end of the first quarter. The guests got to within 2, 21:19, early in the second, but Madrid ran off eight straight to get back up by 10. They closed out the half with the hosts up 36:28. In the third Maccabi was able to get to within six, but never challenged seriously and Madrid finished off the scoring in the third up 10, 56:46. In the final frame the home club was able to extend their margin to as much 18, but a Maccabi eight point run cut the advantage back to 11, before Madrid was able to close out scoring at the end of the 40 minutes up 12, 75:63.

Sergio Llull dropped in a quarterfinals Game 2 high game of 26 points, but finished second in the MVP race with a PIR of 24. Jaycee Carroll added 14 points, Nikola Mirotic finished with 10 points and 7 rebounds.