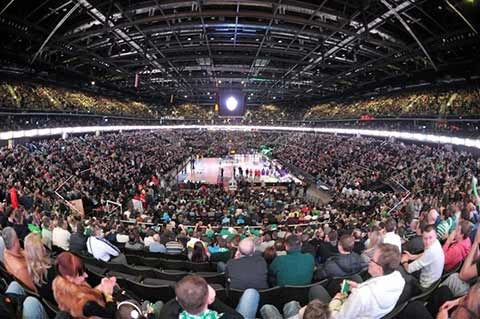 While it’s obviously purely a coincidence, it is interesting that Euroleague competitions last week were all won by the home clubs, and this week, the first five games have gone to the visitors. With three games left on the schedule, there’s a very good possibility that Euroleague Top 16 fans are in for another clean sweep as Maccabi (1-2) travels to Khimki (2-1), Caja Laboral (3-0) heads to Fenerbahce (0-3), and Montepaschi Siena (3-0) ventures to Athens to take on the defending champions Olympiacos (1-2).

Thursday was filled with blow outs with the closest game being an eight-point win by Real Madrid over Unicaja and the largest margin being an 18-point win that Anadolu Efes got over Brose Baskets Bamberg.

Group E
Brose Baskets Bamberg – Anadolu Efes, 76:94
Anadolu Efes continues to surprise with their play and while beating one of four teams that haven’t won a game in Top 16 isn’t earth shattering, the fact that Efes was 5-5 in the first round and is 3-1 so far in Group E competition, is. Brose Baskets Bamberg falls to 0-4 on the season with the home loss, and the team finds itself desperately needing a win. Next week Bamberg travels to Berlin to take on winless Alba Berlin in a match that will give one team their first ‘W’ on the year. The loss also marks 10 straight losses in Top 16 play for Brose, with no wins to their credit.

Brose took control early, earning a 27:23 margin at the end of the first quarter, but Efes came back and held a one-point lead heading into the halftime break, 46:47. Brose couldn’t find the bottom of the cords for over three minutes of playing time at the end of the third/start of the fourth and allowed the visitors to extend their lead to six at the end of three. Efes turned it on in the final frame and put Bamberg away early to finish with a 76:94 win.

Anadolu Efes got 17 from Sasha Vujacic, 15 from Jordan Farmer (7 assists) and 14 from Dusko Savanovic.

Brose Baskets picked up 19 from Bostjan Nachbar, 16 from Sergerio Gipson and 15 from Maik Zirbes.

Unicaja Malaga – Real Madrid, 64:72
Real Madrid stayed unbeaten with a come-from-behind 64:72 win over Unicaja Malaga, who falls to 1-3 on the season.

Unicaja built a nine-point advantage keep in the second quarter with a 10:0 run, only to have Madrid counter with five unanswered to close the half only down by six, 36:30. The home squad gave the 8,300 that attended something to get excited about with a 10:2 run to open the half and help push the margin up to 14 points. RM chipped away and cut the gap in half to seven, 50:43, at the end of three.

The host could only manage four free throws for the first six minutes of the final frame, while Madrid poured it on and outscored their hosts 14:29, to earn the 64:72 win.

Zalgiris Kaunas – CSKA Moscow, 73:87
The Euroleague ‘Game of the Week’ never materialized as much of a game, as CSKA dominated the contest an picked up a 14-point win on the road. Zalgiris did snag an extra three points for tie breaker purposes with a half-court buzzer beater at the end of the contest. CSKA stays undefeated with a 4-0 record after four weeks and Zalgiris drops to 1-3.

The hosts got their first buzzer-beater in the first quarter as Marko Popovic tossed in two just prior to the horn to pull within one, 15:16. CSKA took control of the game in the second quarter to close out the half up by seven, 31:38.

The visitors launched and connected on a few long-range shots to open the second half, putting together a 2:12 run that opened the margin significantly, heading into the final 10 up 51:65.

CSKA managed the clock as best they could in the fourth quarter, picking their shots carefully and cruised to their fourth win in as games.

Milos Teodosic accounted for 24 points, and Vladimir Mico dropped in 20 for the winners.

Group F
Besiktas JK Istanbul – Barcelona Regal, 59:73
Barcelona used an 11-point advantage in the fourth frame to pick up their third win (3-1 overall) on the young Euroleague season. Besiktas dropped their fourth game to fall to 0-4.

Regal got a five-point lead at the end of the first, but Besiktas closed to within two, 32:34 at the half.

The clubs kept it close in the third frame and exchanged the lead a number of times, with Madrid pocketing the three-point they had at the end of 30 minutes.

Barca turned up the defense and held their hosts scoreless in over half the fourth quarter, while running off nine straight to get up 51:60. Besiktas was able to get to within seven again, but Madrid’s scoring was to strong and they closed out the contest doubling that margin, 59:73.

Curtis Jerrel was game-high with 17 points for Besiktas, while Gasper Vidmar added 14.