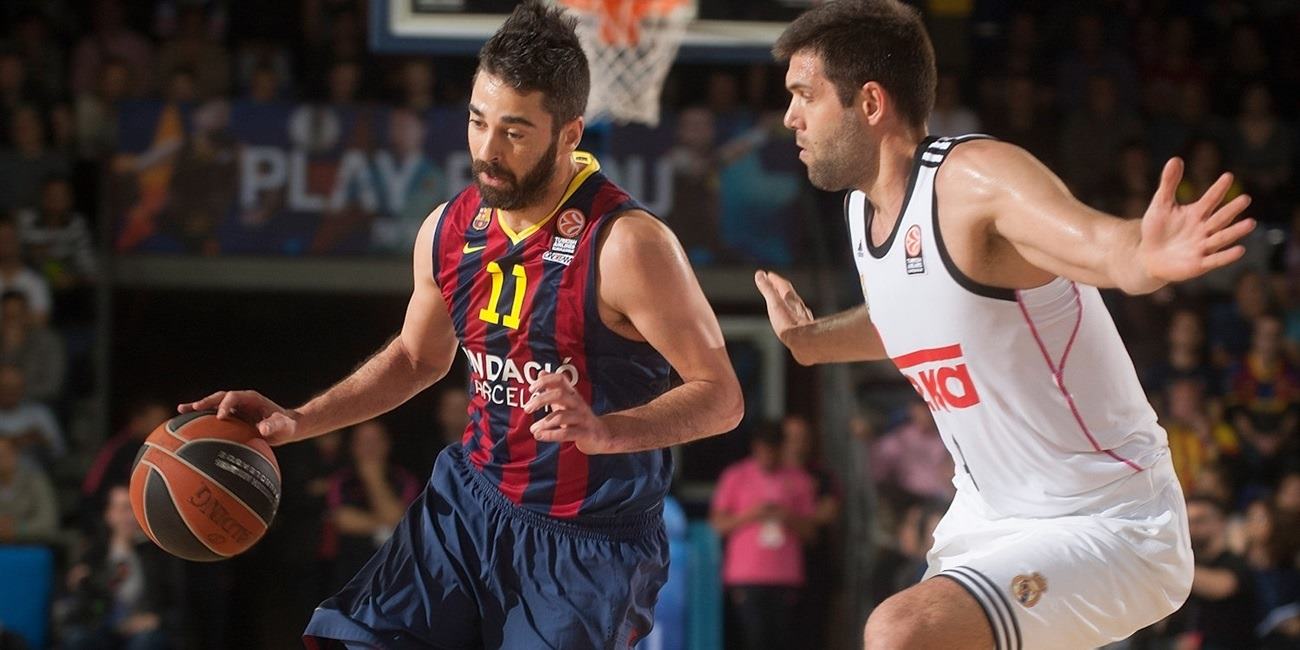 There was an abundance of huge games in the Euroleague on Thursday as the Top 16 entered its thirteenth week of action. The evening threw up historic derby games and huge contests that went some way to clearing the qualification picture for the Play-offs. With the Euroleague Top 16 just two weeks away from closing there was also the euphoria of qualification and the sadness of elimination felt on the night.

In El Clasico, Barcelona welcomed Real Madrid and picked up a big home win over its old rival, while ALBA Berlin stunned Panathinaikos on the road in Group E. The other Group E game of on Thursday saw Maccabi Tel Aviv see off Galatasaray at home.

There were two match ups in Group E, where Unicaja Malaga found inspiration at the wrong time to pick up a road win over Nizhny Novgorod. Fenerbahce’s frankly amazing run through the Top 16 was finally cut by a massive performance from Laboral Kutxa Vitoria.

Barcelona vs. Real Madrid, 85-80
Real Madrid has been an image of consistency through the Top 16, while Barcelona struggled at the start of this phase. It is surprising then that the two clubs now share a 10-3 record at the top of Group E, thanks to Barca completing its turn around with a home win over its El Clasico enemy. Both teams had already qualified and the race is now on for first place in the contest, with Barcelona looking to continue a current seven game winning streak.

The game was tied 11 times through the first 38 minutes of the contest as the Spanish giants traded buckets and got tight in the paint. However, the hosts finally found the winning touch in the closing frame to win the game. Mario Henzonja led the winners with 15 points, while Maciej Lampe and Brad Oleson helped Barcelona with 12 points apiece.

Panathinaikos Athens vs. ALBA Berlin, 66-68
ALBA Berlin’s form in recent weeks has kept the club in contention for a place in the Euroleague Play-offs, but on Thursday the club went one step better and downed Panathinaikos in Athens. The victory was enough to put both clubs on 7-6 records and it is now a straight fight between the two to see which makes the next stage.

Panathinaikos led comfortably through three quarters, leading 55-46 after thirty minutes, but ALBA stunned the home fans with a massive 11-22 final act. Alex Renfroe was the scoring base for the Germans with 16 points, while Reggie Redding added 14 points and Jamel McLean doubled up with 11 points and 11 rebounds.

Maccabi Tel Aviv vs. Galatasaray Liv Hospital Istanbul, 81-72
Maccabi Tel Aviv put one foot in the Play-offs with a cruising home win over Galatasaray, adding further woe to the already eliminated Turkish club. A win next week will send the current Euroleague champs through, while a loss will see them eliminated.

After a close first quarter which was locked 23-23, Maccabi Tel Aviv slowly pulled away and edged the remaining three stanzas. Devin Smith was in fine touch for the winners with 22 points, 8 boards, and 5 assists, while Brian Randle was good for 19 points. Alex Tyus contributed 17 points and 8 rebounds to the Tel Aviv club.

Kerem Gonlum hit 18 points for Galatasaray, one of only two players to reach double figures. The other was Justin Carter with 12 points.

Nizhny Novgorod vs. Unicaja Malaga, 75-94
Unicaja Malaga was eliminated last week, but the Spanish club continued to fight and actually blitzed Nizhny Novgorod on the road in Russia. In doing so, Malaga eliminated their hosts with both clubs now on 3-10 record with no mathematical chance of qualification. It was a bit late for Malaga to find this form, while Nizhny will rue collapsing at home.

Unicaja Malaga outpaced Nizhny from the start, draining 29 points in the first quarter and holding the Novgorod club to 18 points. Nizhny showed brief recovery in the second act, but the visitors made it a no contest with a stunning 13-31 charge in the third quarter. Mindaugas Kuzminskas led five Unicaja players in double figures with 18 points. Vladimir Golubovic scored 17 points and took 9 off the glass, while Jayson Granger and Jon Stefansson logged 12 apiece.

Taylor Rochestie was not his formidable self, but still managed to score 14 points for Nizhny, while Gal Mekel managed 13 points and Tarence Kinsey hauled 12 points.

Laboral Kutxa Vitoria vs. Fenerbahce Ulker Istanbul, 93-76
Laboral Kutxa has been strong at home through the Top 16, but even so this beating of Fenerbahce is impressive. The Spanish club took apart a team that was hunting a tenth consecutive win, but Fener has already qualified and tied up first place in the group… silver linings. The win took the Vitoria club to sole possession of fourth place with a 6-7 record and all eyes will be on Anadolu Efes tomorrow.

Nemanja Bjelica continued to impress for Fenerbahce with 17 points and 10 rebounds, while Jan Vesely was good for 13 points.