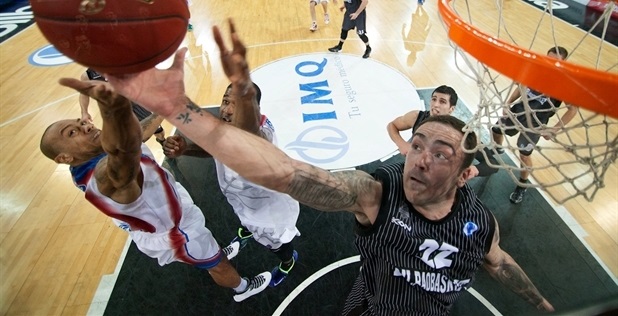 It was another week of intense Eurocup action as the drama of the Last 32 continues to unfold around Europe with close games and exciting Basketball.

10 teams keep their unblemished record at this stage, while from the sixteen games only five clubs managed to collect wins away from home. Proving the quality of the competition, the games were typically tight and five were decided by a single shot, while there are mouth watering clashes aplenty to look forward to next week when Round 3 gets underway.

Group I
JSF Nanterre continued to enjoy its debut Eurocup experience by defeating Karsiyaka Izmir (79-84) on the road to 2-0 at the top of the group. The French Euroleague dropout clinched the game thanks to a dazzling final four minutes in which the team nailed 5 from beyond the arc. Trent Meacham’s 28 points and 5 assists paced Nanterre´s success, while Bobby Dixon collected 21 points, 7 rebounds and 6 assists for the losing team.

Ratiopharm Ulm also claimed a road win in Group I in a high scoring encounter with Foxtown Cantu, with the German visitors emerging 97-106 victors for 2-0 in the table. Ratiopharm went one shy of a Eurocup assist record by laying on a massive thirty throughout the game and completed the win despite a last ditch effort from Cantu. Edgar Sosa hit 87.5% of his three pointers (7 – 8) to score a game high 24 points for Ulm while also adding 7 assists.

Group J
Italian club Banco di Sardegna Sassari slipped to defeat away from home against German hosts Brose Baskets Bamberg (83-72). Rakim Sanders and Elias Harris rallied in the fourth quarter for Bamberg to secure an 11-2 run and take the game, while Anton Gavel´s 11 points in the first 10 minutes laid the foundation for success. Brose now sits alone at the top of Group J with a 2-0 record.

Aykon TED Ankara Kolejliler outpaced BCM Gravelines Dunkerque down the stretch at home (71-68) to collect a first win in this season´s Eurocup Last 32. In a close contest Vladimir Golubovic stood out with his 17 point and 12 rebound double-double contribution.

Group K
Khimki Moscow Region strolled to a very comfortable 87-48 home win over Maccabi Haifa Bazan in a one sided contest that was decided by 39 points. The hosts were in control throughout thanks to the pacing of Kresimir Loncar with a double-double performance consisting of 18 points and 10 boards. The Russian club now sits pretty on 2-0 at the top of Group K.

CEZ Basketball Nymburk squeezed out Italian champs Montepaschi Siena 78-75 in the Czech Republic. Siena´s European woes have transferred from the Euroleague to the Eurocup as the club lost its second consecutive game to slip to 0-2 at the bottom of the group. Nymburk´s fortunes improved as the club secured its first win of the Last 32, but needed six free throws in the last 24 seconds to get it.

Nizhny Novgorod went the distance against Crvena Zvezda Telekom Belgrade at home but emerged with an 86-75 win. Luke Babbitt hit 25 points for the winners as the Russian club took sole possession of top spot in Group L with a 2-0 record. While the scoreline was comfortable at the final buzzer, Belgrade never made it an easy contest for the hosts.

Group M
Hapoel Migdal Jerusalem gunned down Banvit Bandirma at home thanks to 92-73 scoreline. The hosts were helped by five players scoring double figures, including Josh Duncan and Bracey Wright with 17 apiece. A 12-0 third quarter run was enough to propel Migdal to victory and the Israeli team moves top of the group at 2-0.

Ukrainian giant Budivelnik Kiev secured a first win of the Eurocup Last 32 by beating Union Olimpija Ljubljana 88-76 at home. The Victory resigns Ljublana to the bottom of Group M with a 0-2 record while Kiev improves to third at 1-1.

Group N
Khimik Yuzhne took the spoils away from home by downing French club Strasbourg 72-78. The hosts seemed to be cruising at halftime and held a large 41-27 advantage, but Kiev improved in the second half and Jamal Shuler hit 14 points at the end of the third quarter to make the game tight. In the fourth Romeo Travis hit 7 without reply for the visitors to secure the win.

ALBA Berlin also snatched victory on the road by overcoming Radnicki by ten points (75-85). Nothing could separate the teams at the end of regulation as the fans inside the Jezero Arena were treated to overtime. In the extra period ALBA found another gear to hit ten points unanswered and escaped with an important away win.

Group O
Unics Kazan had to push hard in the fourth quarter to secure a victory over Valencia Basket in a hard fought game that ended 82-75. Unics stays undefeated in the Eurocup this season and tops Group O thanks to two victories on the bounce, while Valencia dropped to 1-1.

Telenet Oostend almost threw away a huge lead in the fourth quarter but managed to hold on for victory against Stelmet Zielona Gora (76-74). The hosts held a massive 16 point advantage in the last period of the game but a 2-23 run from Gora decimated that lead and put the game on a knife edge in the final seconds. However, Oostend held firm and took the spoils.

Group P
Besiktas Integral Forex Istanbul stayed undefeated at 2-0 in Group P after holding on to beat CAI Zaragoza 70-63. The Turkish team held control for much of the game but had to contend with a late comeback attempt by the Spanish visitors. Chris Lofton gave Besiktas the foundation for success with a 19 point game.

The game between Lietuvos Rytas Vilnius and Cedevita Zagreb went down to the wire as Rytas claimed a vital road win (83-84). There were just 23 seconds left on the clock when Darius Songaila’s mid-range jumper found the basket and handed victory to the visiting team.