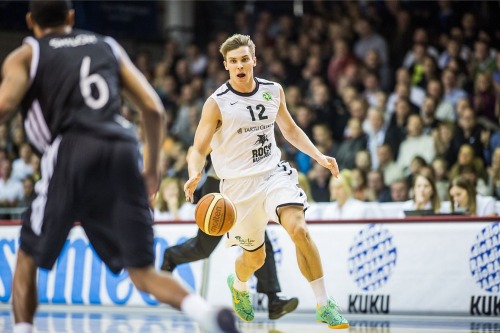 Round 3 of the Second Stage in the Eurochallenge is underway as six games were held on Tuesday evening, with a further two to follow on Wednesday evening.

Tartu Rock made it three from three in Group I as the Estonian team defeated Gaz Metan Medias at home, while Krasnye Krylia travelled to PO Antwerp and picked up a win. In Group J Reggio Emilia downed KRKA Novo Mesto to take control of the group, at least until tomorrow. Group K saw Royal Hali Gaziantep stay undefeated in the Eurochallenge Second Stage with a road win over Dijon, while Triumph Lyubertsy also took an away win against BK Ventspils. The action was rounded out in Group L where Tsmoki Minsk collected a road win over Danish outfit Bakken Bears Aarhus.

Tartu´s fantastic start to the Second Stage as the Estonian club put thirty points on Romanian visitors Gaz Metan Medias. The victory pushes the team to three for zero at the top of Group I as the unbeaten start to this phase continues. Medias continues to struggle in Group I and now sits bottom of the table with a 0-3 record.

The visitors enjoyed the best of the opening exchanges and eked out an advantage after 10 minutes, although at 17-18 the games was very tight. Medias continued to hold the advantage during the second quarter but with just three minutes left Tartu snatched the lead and never lost it again, taking a small 42-40 lead into the second half. The hosts never really looked back as they continued to pick up points and restrict Medias, taking a 70-55 advantage into the final 10 minutes. Even with the game tied up Tartu never looked back and even scored 10 points unanswered to finish the game in style.

The visitors did a great job in restricting Tartu´s leading scorer Vilmantas Dilys to zero points, but the winners had plenty of back up contributors. Tanel Kurbas netted 24 points in victory, while Janar Talts put in a fantastic double-double performance of 20 points and 10 rebounds.

Radomir Marojevic put together his own double-double for the losing team by securing 19 points and 10 rebounds.

Royal Hali Gaziantep picked up its third successive Eurochallenge Second Stage win by downing French club Dijon on the road. The Turkish team passed a struggling Dijon team, but was made to work hard for the victory to improve to 3-0 in Group K, while Dijon remains rooted at the bottom of the table with a disastrous 0-3 record.

It was a close game throughout as the teams could not be separated throughout the first three quarters, with no team managing to open up a lead bigger than seven points. Indeed, there were 12 lead changes and 11 equal scores as Royal Hali chased down a Dijon team that always managed to stay one step ahead. That was until the fourth quarter when the visitors managed to snatch the lead thanks to eight unanswered points and hold on for the win. Dijon held a first quarter lead (20-19) after a strong opening where both teams fought for early dominance in the game. The trend continued in the second quarter as the hosts kept going one step ahead without ever controlling the game, allowing Gaziantep to level the score at halftime (35-35). Dijon held a seven point lead midway through the third quarter but could not hold off another comeback by the away team and the game went into that deciding fourth with the score at 54-53.

Baris Ermis nailed a game high 20 points for the winners and also picked up 5 assists and 3 steals.

Andre Harris and Mykal Riley both scored 14 points in the losing effort.