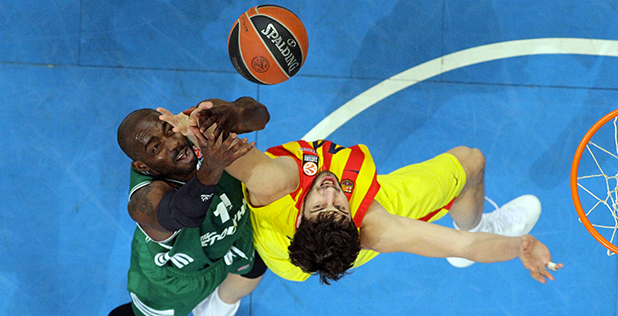 FC Barcelona continued its impressive Euroleague Top 16 form by claiming a 56-63 victory against Panathinaikos Athens on the road. It is never easy to go to the Olympic Sports Center in Athens but the Spanish club grabbed the win on the back of a strong performance against one of the competitions outside favourites.

The win came thanks to another typically bullish attacking performance by Barcelona, and the team remains as the only club in the Top 16 with a 100% records. The Catalan club sits atop Group E with at 5-0 record and has won six on the bounce in the Euroleague. It is indeed the kind of form that sends a message across the continent, while Barca is also attacking the record books.

The victory against Panathinaikos is Barcelona´s 17th consecutive Top 16 victory, a number that equals a club record, while a new club record of nine road wins on the trot has also been set.

With the Spanish visitors flying high, Panathinaikos will take heart from a solid performance, although the team will be disappointed with its attacking performance. However, The Greens are still sitting in second place in Group E with a 3-2 and will be confident of qualifying to the Quarterfinals Round.

First quarter
Barcelona started the game in fine fashion, carving a run after Stephane Lasme opened for the hosts. The Spanish team responded with 10 unanswered points, including a dunk from former Olympiacos man Kostas Papanikolaou that drew a chorus of boos from the Panathinaikos fans. The Greek forward seemed unduly bothered and went on to haul 14 points for Barcelona on the night. The home team soon ended the Barca charge at 4-15 and started clawing back the points deficit thanks to two triples from Jonas Maciulis, one from Antonis Fotsis, and a score and free throw from Lasme. Despite the Panathinaikos come back, the Spanish away team held the advantage after 10 minutes, with the score at 23-24.

Second quarter
Barcelona flew out at the start of the second and put together a 0-12 streak that included a three pointer from Bostjan Nachbar and a dunk from Joey Dorsey. Dimitris Diamantidis drew a foul from Ante Tomic and sunk a couple from the line to recommence scoring for the Greek team, but there was to be no comeback like in the first quarter as Barcelona continued to impress. Erazem Lorbek and Papanikolaou struck from beyond the arc and Victor Sada netted an inside jumper to keep the visitors in charge at 29-42. Panathinaikos failed to muster much of a response in the final two minutes of the second and trailed by 12 points at halftime (32-44).

Third quarter
Michaels Bramos connected from downtown and a Lasme dunk set the early pace for Panathinaikos at the start of the third. The hosts got tough in defence and shut Barcelona out for the first five minutes of the quarter, getting plenty of turnover ball and putting together a 7-0 run. Dorsey broke the streak with a layup for Barcelona and for the remainder of the period the teams traded blows, although a Diamantidis three got the home team to within five points with just 10 minutes to play (47-52).

Fourth quarter
Any thoughts of a comeback were quickly dashed in the fourth as Brad Oleson needed just seconds to nail a three pointer for Barcelona. The game had become a low scoring affair, with both defences looking tight and well drilled. Panathinaikos tried to rally, including lay ups from Lasme and Diamantidis but the Greek team could not score consistently enough to outpace Barcelona. The Spanish team kept matching the hosts (two lay ups from the high scoring Marcelinho Huertas), and with only 10 scores throughout the entire period the game was won as the baskets dried up.

Huertas led the Barcelona charge with 17 points, while former Olympiacos man Papanikolaou came back to haunt Panathinaikos with a 14 point haul.

Lasme and Diamantidis kept Panathinaikos in the contest with 14 points apiece with Lasme also grabbing 8 boards.