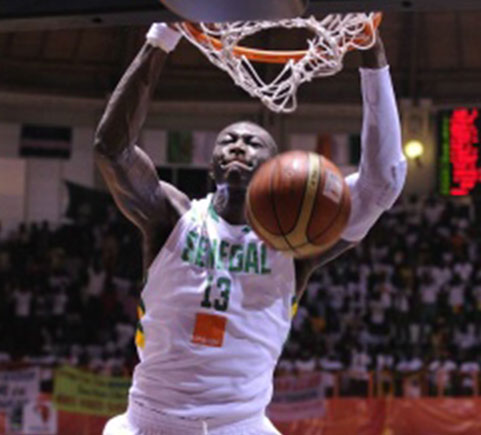 At first glance, the Egypt 77:67 victory over Tunisia in Tuesday’s Round of 16 play in the AfroBasket 2013 competition looks like a huge upset. Egypt had finished third in their group with a 0-3 record, while Tunisia had finished on top of their’s with a 3-0 record. Digging a bit deeper though shows that the three losses that Egypt suffered came with point deficits of 2 – a 72:70 loss to Senegal, 4 – a 67:63 loss Algeria, and 7 – a 69:62 loss to host club Cote d’Ivoire. Three losses by a grand total of 13 points. While Tunisia won their three matches by 2 – a 56:54 win over Morocco, 2 – an 83:81 win over Rwanda in overtime, and their one big win was a 55-point win over Burkina Faso, 100:45. It should be noted that Burkina Faso, a first-time participant in the AfroBasket competition, had the worst point differential in the tournament, having scored only 169 points, while giving up 264.

In other words, a couple of turnovers, a rebound, a blocked shot, a pair of free throws, a bit less distraction over the unrest back home; any number of things go Egypt’s way or against Tunisia and instead of being 0-3, the Egyptians are sitting at the top of their group, and Tunisia is near the bottom. Instead, it plays out that a 4-seed handed a 1-seed a 10-point upset.

Joining the Egyptians in the quarterfinals will be Cape Verde, with a 67:60 win over the Republic of Congo; Senegal, after a 67:57 victory over Rwanda; Nigeria, with a 112:75 rout of the Central African Republic.

The quarterfinal matchups for Wednesday are Ivory Coast against Cameroon, Angola against Morocco, Egypt against Cape Verde, and Nigeria against Senegal.

Egypt – Tunisia, 77:67
Tunisia built a small, early lead, but Egypt took over with 3:09 to play in the first quarter and never gave up the advantage again, on their way to a 77:67 win. The Egyptians won all four quarters to move on to the quarter finals.

At the end of the first frame, Egypt was up 19:15. Tunisia got within a point on two occasions in the second, but Egypt scored five unanswered the second time to put some distance between them. At it’s peak, the Egyptians were up by 10 at the end of the second frame, 35:25, but a triple at the buzzer by Tunisia’s top scorer, Macram Ben Romdhane, cut the margin to seven, 35:28.

Egypt extended their advantage in the third to 10 early on, but Tunisia was able to cut the lead to two, 48:46 with 1:23 to play in the frame. Those would be the last points Tunisia would tally in the third 10, while Egypt would knocked down seven unanswered to head into the final quarter up nine, 55:46.

Ben Romdhane hit a jumper with only 11 seconds ticked off the clock, followed by a quick Egypt response and then a triple by Tunisia’s Mourad El Mabrouk, to cut the lead to six. Egypt got the next four, to push the lead back to 10 and shortly after to 13 on an Ibrahim El-Gammal three-point play. Tunisia ran off six unanswered to cut the lead to seven 66:59, but after an Egyptian three-pointer, the Tunisians connected on another four, to pull to within six, 69:63. The Egyptians converted eight of eight from the line in the final 33 seconds to not allow Tunisia to get any closer. The difference in the final two minutes was a 50-second stretch where Egypt missed a pair of free throws and turned the ball over twice, but Tunisia couldn’t take advantage of the situation.

Egypt got 19 each from Wael Khedr and El-Gammal, while Tunisia got a game-high 22 from Ben Romdhane. Tunisia’s Salah Mejri added 16 points and 9 rebounds.

Congo took the early lead in a big way, outscoring CV 21:11 in the first quarter. They played even in the second, with Cape Verde cutting the lead by a point in a 12:11 frame, to send the teams to their dressing rooms at the break with Congo up 32:23.

A Giovan Oniangue triple with 8:54 to go in the fourth gave the Republic of Congo a 13-point lead, 54:41, but that lead was short-lived as Cape Verde put up a 14:2 scoring run to pull to within two, 56:54, with 5:13 to play. Two minutes later the lead changed hands for the first time since there was 7:25 to play in the first quarter, when Mario Ildo Correia knocked down a deuce in the paint and connected on the single, completing a three-point play, to put Cape Verde up 60:58 with 3:17 remaining. Correia closed out the contest for CV with a triple and a pair of singles to give his club a 67:60 win and a ticket to the quarterfinals.

Dimitry Joseph Akanda Coronel scored a game-high 15 for Cape Verde, while teammate Correia added 14. Congo got 14 from both Kris Morlende and Oniangue.

Senegal – Rwanda, 67:57
Senegal found themselves down by one to Rwanda with four minutes to play and rallied with an 11:1 run over the last 3:23 to earn a spot in the quarterfinals.

The first frame was tight, with neither team getting ahead by more than three. At the end of the first frame Rwanda held a slim 15:13 advantage.

Rwanda got up by as many as six early in the second, only to have Senegal pull them back in, take the lead and get up by a couple of their own. The clubs exchanged baskets and the lead numerous times during a 20:20 second quarter, that resulted in the teams heading into the locker rooms with Rwanda holding on to their two-point lead, 35:33.

Senegal broke free in the third, putting up seven on Rwanda, 14:7, and taking the lead into the final frame, 47:42.

With eight minutes to play, the gap had been removed and the clubs sat with a 49-all tie at the 8:08 mark. Senegal extended a lead to five, only to have Rwanda take the lead back at the four minute mark, 55:54. Senegal then went on their 11:1 run that spanned the final four minutes, to pick up their spot in the quarterfinals with a 67:57 win.

Senegal got 18 points and 8 rebounds from Abdou Badji, and 13 points from Maleye Ndoye. Rwanda got a 14P/12R double-double from Kami Kabangu, and 12 from Kenneth Gasana.

Both clubs came out firing and put up 51 points in the first quarter between them. Michael Benoît Mokongo scored 11 in the first 10 for CAF, including a a triple to close out scoring in the frame, that also gave CAF a three-point lead heading into the second, 27:24.

Nigeria didn’t let up in the second and poured in the points, scoring 34 in the second 10, while only giving up 12. The final 11 came from the Nigerians, as they heading into the break with a 58:39 advantage.

The second half was much of the same, with Nigeria putting up shots as soon as they had them and playing tough defense, outscoring CAF 52:36 in the final 20, to take a 112:75 win into their quarterfinal matchup with Senegal.

Stan Okoye was game-high for Nigeria with 29 points and 7 rebounds, while Ikechukwu Diogu added 22 points and 8 rebounds. Max Kouguere led the Central African Republic with 22 points, with teammate Mokongo adding 18 points and 6 assists.