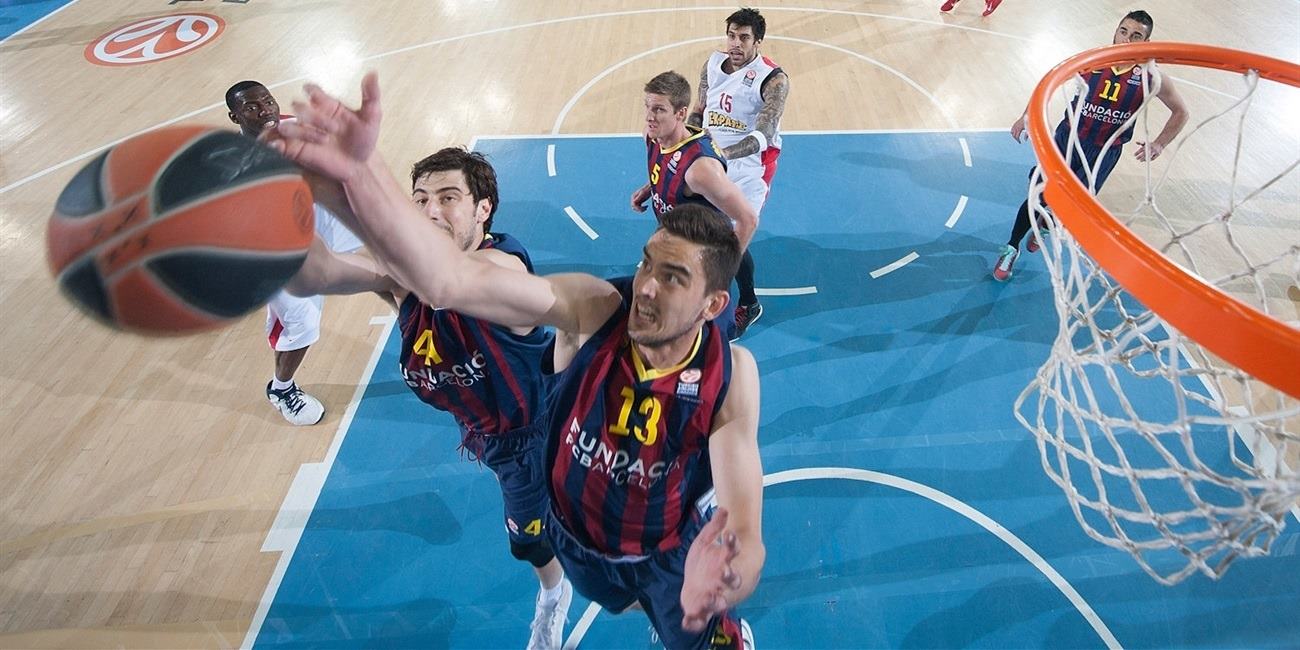 The 2014/2015 Euroleague Play-offs tipped off with victories for CSKA Moscow and Fenerbahce, both clubs taking 1-0 leads in their best of five series. On Wednesday it was time for the Spanish giants to step up as both Barcelona and Real Madrid hosted their Play-off openers.

Of course, Barca and Real are always among the favourites for the tournament, and it is no different through the 2014/2015 Euroleague season. Both teams collected moral boosting Game 1 victories in Spain, Real Madrid edging past Anadolu Efes Istanbul, and Barcelona crushing Olympiacos. It is in Catalonia where we will start.

Barcelona vs. Olympiacos Piraeus, 73-57
It was only two years ago that Olympiacos sealed its second consecutive Euroleague title, but the Greek giant will have to improve if it will have a chance of winning this season’s competition. Barcelona on the other hand are coming into form at the right time, and here the Catalan giant looked slick at both ends of the court. Barca have now won their last eight home clashes against Olympiacos, so the pressure is on the Greeks in Game 2, which will also be held in Barcelona.

Barcelona started the game in blazing form and after a defensive school in the first quarter led 20-8 through 10 minutes. In the second frame Olympiacos improved and closed the gap to 35-29 during the long break, but the home team still looked in control. The hosts edged a low scoring third period 15-12 to restore a double digit lead at 50-38 with the fourth to come. Barca carried the momentum and eased through the final act to win the game.

Only two players managed double figures for Barcelona, Juan Carlos Navarro and Bostjan Nachbar with 10 points each. Plenty of other players in the roster scored solidly though to pace the Spaniards to victory.

Real Madrid vs. Anadolu Efes Istanbul, 80-71
Of all the clubs remaining in the 2014/2015 Euroleague, Anadolu Efes is probably the surprise package. That is admittedly soft billing for the most successful team in Turkish Basketball history, but Anadolu Efes does find itself in a position it has seldom been in over the last decade. As for Real Madrid, they are Last Four stalwarts and Los Blancos will be desperate to make the showpiece this year, which is held in the Spanish capital.

Real went to form against a tricky Anadolu team and pulled away from the Turks in the second half. The game was tight in the opening quarter, with traded buckets leading to Madrid leading 22-20 at the first split. In the second stanza the Istanbul contingent found a hot streak and won the period 13-23 to lead 35-43 at the midway buzzer. Real Madrid responded well in the third quarter, holding dominance at both baskets with a 26-10 run. That blitz gave the hosts a 61-53 lead heading into the fourth quarter, a deficit Anadolu Efes could not make up.

K.C. Rivers topped the winners with 21 points, followed by a double-double of 14 points and 10 rebounds from Gustavo Ayon, 12 points from Felipe Reyes and 10 points from Rudy Fernandez.