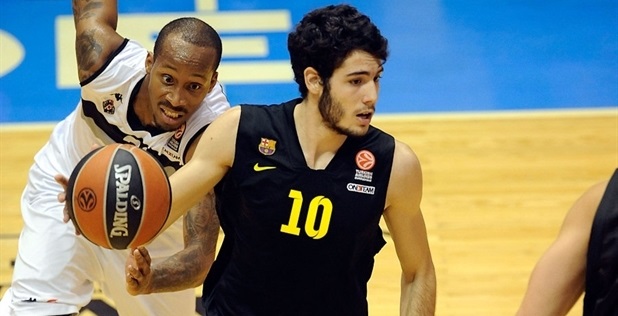 Euroleague: FCB and CSKA win in Group A

Round 6 of the 2013/2014 Euroleague is underway after six games were held in the competition with the remaining six to be played on Friday. The big news came from Group A, where FC Barcelona and CSKA Moscow continue to put pressure on form team Fenerbahce at the top of the table. Barcelona is now in the grove in this year´s competition and recorded a comfortable road win over Partizan, while CSKA are also finding their feet after posting a home victory over Nanterre.

In Group C, Galatasaray continues to keep in touch with Olympiacos at the top of the group and tonight the Turkish team beat Siena at home to remain in second place. Bayern Munich´s good early form in the 2013/2014 Euroleague has faded as the team slipped to a second consecutive defeat, this time at the hands of Stelmet Gora in Munich.

There was also action in Group D where Greek giants Panathinaikos bounced back from last week´s loss to Tel Aviv to beat Lietuvos Rytas at home. As for Tel Aviv, the team failed to impress in front of their fans and slipped to a surprising loss against Laboral Kutxa.

After a rocky start to the competition this year, CSKA Moscow seems to be back on track and the Russian team is now a contender at the top of the league´s toughest group. CSKA recorded a comfortable win at home on Thursday, despite Nanterre´s last quarter comeback, and the team now sits third in Group A with 4-2. French club Nanterre is finding Euroleague Basketball hard going and the club stays in fourth with a 2-4 record.

A slow moving first quarter produced few baskets, but the visitors got the better of the opening exchanges and led 9-14 at the end of the period. The Moscow players responded with an emphatic second 10 minutes in which the former champions pillaged 24 points to Nanterre´s 12 to lead 33-26 at halftime. During the third Moscow went on a 12 point run that saw Nanterre offer just two points in return and by the end of 30 minutes CSKA led 59-41. Nanterre finished strongly and put 14 points on the board, while Moscow picked up 2, but ultimately the late comeback failed and the home team took the spoils.

Jeremy Pargo was at the forefront of Moscow´s attack with 14 points, Vladimir Micov hit 11 and Kyle Hines had 10 points and 4 steals in the winning effort.

Deshaun Thomas picked up a game high 18 points for Nanterre, while Trent Meacham was on hand with 11 for the French champions.

Like CSKA, Barcelona has had some slips during the 2013/2014 Euroleague season, but the Spanish giants are well on the road to recovery with another impressive win. Barca took out Serbian giants Partizan Belgrade on the road to go 4-2 in Group A and retain second place, while Partizan´s woes continue with the club rooted to the foot of the table with a dismal 1-5 record.

Partizan started the game strongly and went on a 9-0 run in the first; that was enough to give the hosts a 17-11 margin heading into the second quarter. Barcelona started putting successful plays together and took control of the game in the second 10 minutes and by halftime the visitors led 32-38. After the midway break the Spanish team came out the stronger and set about dismantling Partizan on several occasions. By time 30 minutes were on the clock the score board read 44-64. With a 20 point cushion at the start of the fourth, victory was all but assured for the away team; and so it proved with a comfortable last 10 minutes.

Alex Abrines (image) was the pick of Barcelona´s attack with 18 points with Kostas Papanikolaou had 8 points, 5 rebounds and 5 assists in a solid all round game.

Bogdan Bogdanovic was once again a shining light for Partizan as he helped himself to a game and career high 24 points. Joffrey Lauvergne had a good game for the hosts and collected 9 points and 12 rebounds.

In the closest game of the evening, Turkish club Galatasaray closed out Italian champions Montepaschi Siena at home. Pops Mensah-Bonsu was once again a driving force for Galatasaray as he picked up another impressive double-double, this time by hitting 16 points and claiming 16 rebounds. In a very close match that was hotly contested throughout the four quarters it was a game destined to go to the wire. Daniel Hackett paced Siena with 16 points, but the Italian team continues to struggle in the Euroleague this season and sits last in Group C with a 1-5 record. Galatasaray stays close to Olympiacos at the top as the Turkish team remains in second and improves to 4-2.

Bayern Munich surprised many with good early form during the opening rounds of the 2013/2014 Euroleague, but the wheels are starting to come off for the German debutants. Polish club Stelment Gora visited Munich and came away with a victory, although the hosts certainly had chances in the game. Bayern led at halftime but Gora emerged in the second half to win the third and fourth quarter and claim a win that sees the team go 2-4 in Group C. Bayern remains in third place but the club´s record now slips to 3-3.

Panathinaikos were disappointing in their loss to Tel Aviv last week, but the Greek powerhouse bounced back on Thursday with an encouraging win over Lietuvos Rytas. Panathinaikos stays in third position in Group D with a record of 3-3, while Rytas continues to sit bottom of the group, now with a 1-5 record.

After the joys of beating old foes Panathinaikos last week, Maccabi Tel Aviv came crashing back to earth with this loss to Laboral Kutxa at home. The Israeli giants slip to second in a very tight Group D with a 4-2 record. Kutxa remains in the hunt in the group after this win and now goes 3-3 after six rounds.