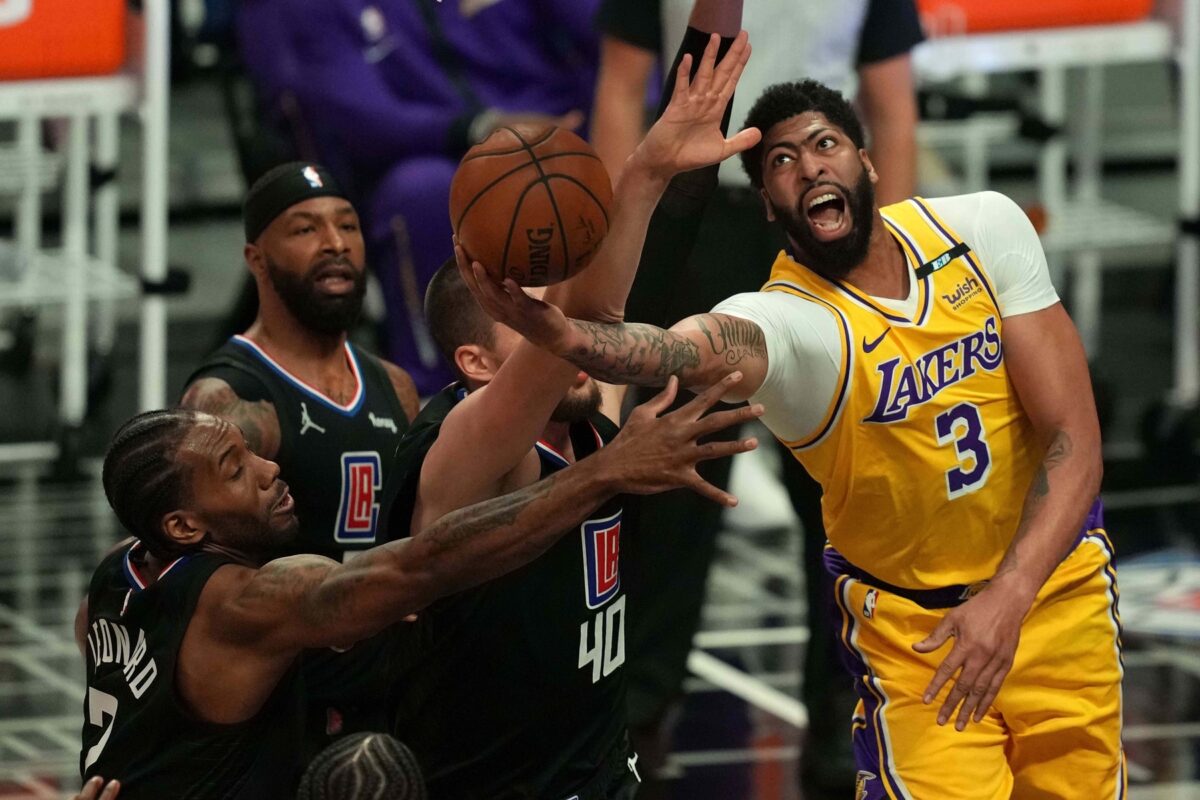 Where does Anthony Davis rank in all-time NBA legends?

In sports, “legend” is a word that may well be bandied about all too freely. It’s also always heavily influenced by the player’s most recent form when, really, it’s the longer view that it’s most important to take.

There’s also the inclination to name a legend at a relatively early point in his career. Long before they have had a chance to secure what could reasonably be considered a proper track record to create a lasting legacy.

However, there are always exceptions. Sportspeople who, from the very start of their careers, give all the signals that here is someone exceptional, the like of whom we may never have encountered in the past.

In tennis, it might be a player like Serena Williams, in American football a Patrick Mahome, in Formula 1 a Lewis Hamilton.

When it comes to elite basketball, a name to rank alongside all of the examples is surely Anthony Davis. At the age of just 28, he has already achieved so much and still surely has more seasons ahead of him to reach even loftier heights.

And, despite his numerous records in all areas of the sport, it was in the NBA championships of last year that he announced that here was a true legend of the sport. In the time he has been playing he has won an NCAA tournament with alma mater Kentucky, picked up an Olympic gold medal in London in 2012, and has now claimed a Larry O’Brien Trophy too.

In doing this, he has already become only the eighth ever player to win a so-called triple crown. Moreover, he is the only one ever to add a FIBA World Championship gold medal to that triple crown.

For most players, this would be enough to secure a space in the list of all-time greats, already ranking him alongside other great power forwards, including Kevin Garnett, Karl Malone, Charles Barkley, Dirk Nowitzki, and Tim Duncan.

It is arguably only since his move from the New Orleans Pelicans to the Lakers that he has shown his true class. And it’s only by being measured against another true legend of the sport, LeBron James, that his true greatness can be fully appreciated.

But the job here is to judge Anthony Davis against other power forwards, something that LeBron would never claim to be, so how does he measure up?

Already, it’s fair to say that he is almost on level-pegging terms with the five players already mentioned. He has already collected four NBA first-team selections, the same as the all-career totals for Garnett and Nowitzki, while Garnett only achieved one more.

Something that all of the best power forwards have struggled with in the past is winning titles on a consistent basis. Except for Duncan, who picked up two in his career, Nowitzki, Garnett, and Davis all have one apiece, while Barkley and Malone always drew a blank.

So if Antony Davis ever goes on to repeat last year’s success, he’ll be tying with Duncan, with many more seasons ahead of him. However, his Lakers struggled with injuries this season. Even Davis himself was out for a while with an Achilles injury. As a result, his team had to beat the Warriors in a play-in game to qualify for the NBA playoffs. That victory keeps the Lakers in the race, and they are still a title contender according to the NBA playoff odds.

Looking at the numbers

Digging more deeply into the stats as a basis for comparison, Davis starts to pull away from the competition. In his seasons as a professional, he comes either on top or as runner-up in several areas, including points, rebounds, steals, blocks, and player efficiency ratings.

This really shouldn’t come as much of a surprise as he has been a record-breaker ever since his college days. For example, in the 2011-12 season, he single-handedly blocked more shots than most other teams managed in the NCAA Division 1.

Today, Anthony Davis also seems to save his very best for the playoffs. Last season he averaged 27 points and nine rebounds per game during the playoffs, while his true shooting percentage was an almost unbelievable 67%. These figures have seldom been seen before, certainly when considered over every round of the playoffs. In yesterday’s play-in game, he scored 25 points and grabbed 12 rebounds, so he is right on track.

With a player efficiency rating of over 29, the only others to have come near this in a championship-winning run are LeBron James and Michael Jordan, so he really is up there with the best of the best.

Besides multiple championship wins, the only other accolade that Anthony Davis is lacking is an MVP award. In this respect, he is trailing behind the other “big five” power forwards. Yes, he’s come close, but he’s never got that cigar. James claimed it in last year’s finals and it does seem that while they’re on the same side it may continue to elude Davis.

But James will probably retire before Davis does, opening the way ahead to add a couple of these accolades to the list.

So, where does this leave us in the final analysis? It’s fair to say that Anthony Davis can rub shoulders with the greats at the moment without necessarily rising above them. But he’s in his prime, and time is on his side.

And that means it’s a fair bet that one day he really will be able to claim he’s the greatest of them all.