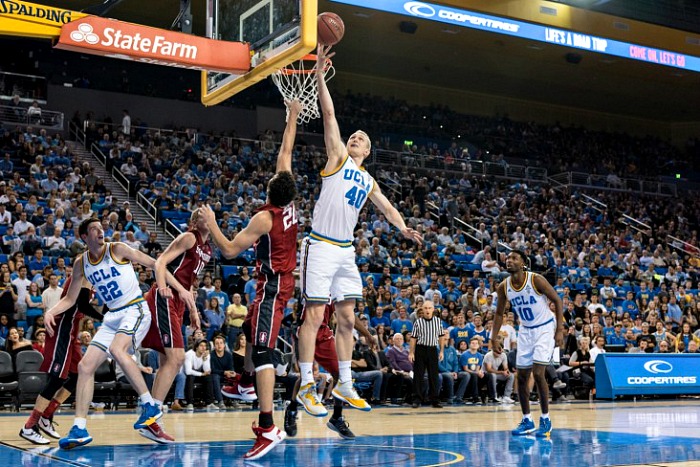 If there were to be a favorite, it would have to be the UCLA Bruins. Their offense is loaded with talent which is led by a freshman, Lonzo Ball (198 cm), who you will be seeing in the NBA in the near future. Ball is averaging 14.6 ppg, 8.0 aspg, and 5.5 rpg, and will do nothing but jump off the screen when you watch this team play. He runs the floor better than anybody in the country and is surrounded by shooters. This diaper dandy can lead this team to the distance.

However, you really can’t forget about the defending champions, Villanova Wildcats either.

This team still has all of their stars from last year and rank number one in the nation right now with an 18-1 record. Their only loss came on the road against a good Butler team. The Wildcats have their leading scorer, Josh Hart (196 cm), who is putting up 19.3 ppg.

What about John Calipari at Kentucky with all his great recruits? Are they for real?

This team is a force to be reckoned with as well. Calipari did not disappoint again with his ability to go recruit future high draft picks. Coach Cal put together a terrific freshman guard combo with Malik Monk (190 cm) and De’Aaron Fox (190 cm). Monk led the team to a couple of big wins early in the season, including a 47 point explosion against North Carolina. He is a player that can hit from anywhere on the court and was literally put on this earth to do nothing, but score. Watch for him to put up big numbers for Kentucky in big games from here on out.

Fox has been coming on as of late for Kentucky. The point guard is a very crafty lefty with a great quickness when going to the basket. Coming out of Houston makes it seem like he has been studying the James Harden “Eurostep” for a long time. Watch out for this combo, as well as Isiah Briscoe (191 cm), who is the veteran guard of this team. They are ranked number five, as of this week, with a 15-2 record.

The scary thing for Calipari and his team is that the other elite coaches around the country have legit teams who will be tough to beat.

I’ll start with Rick Pitino at Louisville who already beat Calipari and his Kentucky team in a huge in-state rivalry. Louisville won 73-70 at home, so when Pitino has a good team I like his chances against anybody.

The thing about College Basketball is that coaching matters much more than in the NBA. What I mean by that, is in the NCAA you have to rely on X’s and O’s a lot more because you don’t have a team that is filled with great scorers and masters of pick and rolls. So, coaches need to dial up the best plays possible to get his players the best shots as well as being more creative and complicated on defense to confuse these young players. In professional basketball, most of these players have been around for a while and seen what any coach can think of to throw at them. They are also talented enough to be able to get out of those situations.

That is why you will consistently see the best coaches in the final four, but the best players in the NBA Finals.

Pitino is one of the best, as well as Tom Izzo from Michigan State, Roy Williams of North Carolina and Bill Self coaching Kansas. These teams consistently get to the final four and have another great chance again this year.

The other great coach in the NCAA is Mike Krzyzewski at Duke. He is arguably one of the best all-time. You can’t argue against having the most wins of all-time. However, his team right now is trending down. The worst part about Coach K is his inability to coach his team back to form right now due to undergoing surgery on his lower back. He is out indefinitely at the moment.

Can Duke bounce back? They have two highly touted freshman in Harry Giles and Jayson Tatum, but they have been battling injuries to start their career. Giles actually suffered a torn ACL in his senior year of high school and is working hard to get back to 100 percent. However, it is taking him some time to get back to where he once was. If he can, while meshing with Tatum, this team could get back on track.

It has been difficult, especially with their top guard, Grayson Allen, causing distractions for the team.

Allen can not stop tripping players on the other team. It is causing the team to get stuck in his negative light of being a dirty player while also getting very emotional in a non-professional way. Allen knows he is hurting his team, but I’m not sure he can help himself in the heat of the moment.

Coach K, wherever you are, get back soon or else your team is doomed.

Just because the other top teams in the country don’t have one of these historically great coaches, doesn’t mean they can’t win it all. Any team can have a couple of players who get hot, or even just lucky. The best way to overcome the odds is to have an innovative game plan and execute it.

That’s exactly what is happening in West Virginia, or what I like to call them…Press Virginia.

This team is coached by Buzz Williams who is a psychopath on the defensive side of the ball. What he does is bring in great athletes who will guard their opponents from baseline-to-baseline with incredible intensity. This ultra-aggressive style has led to West Virginia leading the country in every steals or turnovers forced categories by a mile. In fact, West Virginia’s turnover margin doubles every team’s in the country with 13.3 defensive turnovers to offensive turnovers.

The problem with West Virginia is they previously have not been able to be more than a pest and make a deep tournament run. Maybe this is the year they can pull it all together. The team is off to a great start. Just last week they destroyed the number one Baylor Bears by 21 at home. West Virginia is ranked number seven in the AP poll with a 15-2 record. Watch out for this team.

Due to the Baylor loss, there is only one team in the nation who are undefeated. That team is the Gonzaga Bulldogs.

Gonzaga is the only team ranked in the top-19 that doesn’t play in an elite conference. However, this team has been highly successful for about 10-15 years which gives them credibility. The respect is there, but the trust in championships are not.

The Bulldogs have been in this position before. Great regular season, dominate their conference and create players into stars. Then, get a one or two seed in the tournament, and be eliminated early. Not once have they made it to the Final Four while being a top-seed almost every year. That is why it is hard for me to predict this team can push through and prove history wrong.

Until that happens, they will be nothing but just one the best regular season teams over the last decade. Nothing more, nothing less.

There are plenty other really good teams and stories around College Basketball this year. It is all starting to heat up.