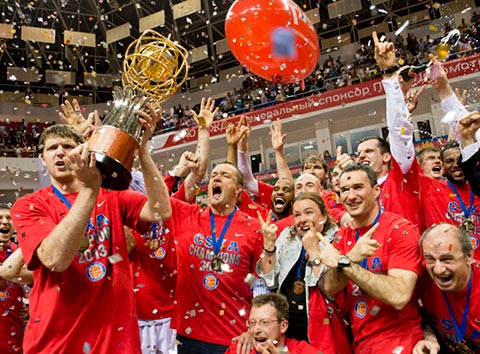 CSKA’s Dmitriy Sokolov battles for position on the boards with Kuban’s Alexey Savrasenko during Game 4 of the VTB United League finals.

CSKA Moscow continued their dominance of the VTB United League with four-game victory in the 2012-13 finals over Lokomotiv-Kuban. On Friday, CSKA put the finishing touches on their fourth title in five seasons, when they traveled to Krasnodar, Russia and won Game 4, 54:59. Not only has CSKA won the title four times in the five years the league has been operating, they finished second to Khimki during the 2010-11 season.

CSKA was led by Sonny Weems’ 24 points, while Lokomotiv-Kuban got 16 points from Derrick Brown in the loss.

Victor Khryapa, CSKA Floor leader, was absent from Game 4 with an ankle injury suffered in Game 3. Weems picked up the slack and was the only member of the visiting club that would score in double figures. Even though he didn’t play in Game 4, Khryapa was named the Finals MVP on the strength of his performances from the first three games.

Weems tallied the first five points of the contest with a triple and a jumper off an assist from Aaron Jackson, who had missed a jumper of his own and got the rebound, then kicked the ball out to Weems. Mid-way through the frame the hosts got their first lead when Brown connected on a jump shot to put his club up 8:7. He then hit another jumper to give Kuban eight straight and a 10:7 lead. After an Andrey Vorontsevich deuce, Brown struck again, this time on a dunk, then Sergey Bykov hit a jumper and Brown followed with other of his own. When Alexei Zozulin knocked down a three-ball for CSKA, it put a cap on the 14:2 run that now had the home club up 16:12. Nicholas Calathes sank a jump shot to finish up the first quarter scoring with a minute and 50 seconds left in the first quarter and Kuban up 18:12.

Much of the second 10 was played from the charity stripe with the clubs combining to shoot 24 free throws (making 14). Weems hit the first point of the new quarter, then Calathes dropped a triple, followed-up by a three-ball from Mantas Kalnietis, to give Kuban a double-digit lead at 24:14. For the next four minutes the only points either club would tally were from the line, and it wasn’t many as the Vladimir Micov double cut the lead to six, 26:20. Brown hit a jumper with just under a minute to play in the half, then Zozulin connected on a lay-up and Aaron Jackson canned a jumper at the buzzer to head into the dressing rooms with CSKA down six, 33:27.

To open the third, Weems got the hot hand and connected on a deuce, which was followed by Alexey Savrasenko’s dunk. Seconds lately Weems pulled up with another jumper, which was countered by a Simas Jasaitis dunk. Again, a few seconds (12, to be exact) Weems dropped in double, and again Kuban covered his shot with one of their own (Calathes), keeping the margin at six, 39:33. Weems then dropped a triple to pull CSKA to within three. Jackson hit a long-ball with just over two minutes to play in the third, giving CSKA their first lead since early in the first, 45:47, with the quarter ending on a three-point CSKA advantage, 47:50.

The fourth frame was a very low scoring 10 minutes with the guests outscoring the hosts 7:9. CSKA came out in a different defense and held Kuban to a field goal and a free throw, then a drought until just over eight minutes had ticked away. Things weren’t much better for CSKA though, as they could only manage to get up by six, 50:56, with just over two minutes to play. Kalnietis hit a triple to pull the hosts to within three, then he split a pair of singles to draw within two. Jackson gave CSKA a four-point cushion with a pair of free throws, then Weems split a pair to give the Moscow club a 54:59 win and the VTB United League title.

Weems was the only player in double figures for CSKA, turning in a 24-point performance. Jackson and Andrey Vorontsevich added 9 each, with Vorontsevich also grabbing 9 rebounds.

CSKA Moscow is crowned the 2013 champions of the VTB United League after their 54:59 win over Lokomotiv Kuban.

First of all, I’d like to congratulate Lokomotiv-Kuban on an excellent season. They achieved everything they wanted to. The VTB United League is one of the most difficult leagues I’ve experienced in my career. As for the Finals, we played without our leading players – Teodosic, Kaun and, today, Khryapa. Plus, we had to start the playoffs immediately following the Euroleague Final Four. On the way to the title we defeated the EuroChallenge champions Krasnye Krylia, Euroleague Top 16 participant, Khimki Moscow Region, and Eurocup holders Lokomotiv-Kuban. This was one of the most difficult paths to a championship. This title is very important to me, our team and all of our fans.
–CSKA head coach Ettore Messina:

I’d like congratulate everyone with the end of the season and thank my guys for battling and playing with character. The team showed that it can defeat even the strongest opponents. I hope we managed to please the fans with our play. Lokomotiv made a step forward this season and I hope that it won’t be the last one. Yes, we struggled with our emotions today, but is it really possible to play without them at all?! I also want to thank our fans who gave us amazing support and cheered us on not just today, but at every game.
–Lokomotiv-Kuban head coach Evgeny Pashutin