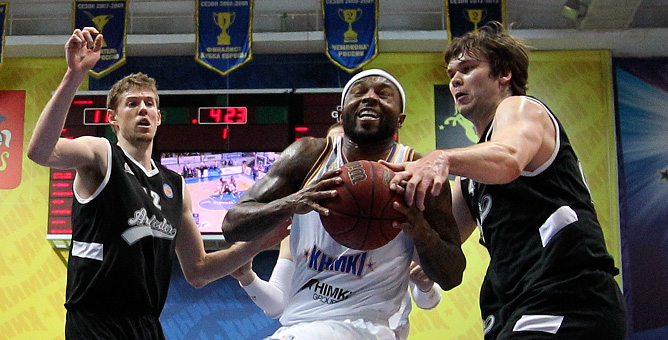 We are one step away from the Final Four of the VTB United League with the Quarter-Final stage in full swing this week. Game 2 of the last eight phase saw Lokomotiv Kuban Krasnodar, CSKA Moscow, and Khimki Moscow Region collect second consecutive wins to take charge of their series’. In the fourth tie, Nizhny Novgorod and Zenit St. Petersburg are locked at one apiece.

Khimki Moscow Region vs. Avtodor Saratov, 87-71 (23-16, 20-23, 27-13, 17-19)
Khimki cruised past Avtodor at home in Game 2, complementing the 99-77 win in Game 1 to take a 2-0 lead in the series. The Eurocup champions seem to have too much quality for Avtodor, but the series will head to Saratov on Friday so Khimki will have a new challenge in its quest for a Final Four berth. The hosts were superior under the post as they collected 50 of their points in the paint, compared to just thirty from Avtodor, the away team needed to play high margin hoops from the field to even stay in the game. An organized Khimki team controlled the game and dished 25 assists on the way to a comfortable double digit lead where they lost just one frame.

Egor Vyaltsev led five Khimki players in double digits by claiming a game high 19 points. He was followed by Marko Popovic with 11 points and Tyrese Rice, Petteri Koponen, and James Augustine with 10 points each.

Kyrylo Fesenko logged 17 points and 8 rebounds for Avtodor, while Jeremy Chappell had the only double-double of the game with 14 points and 10 boards.

Lokomotiv Kuban Krasnodar vs. Unics Kazan, 89-75 (27-14, 30-15, 13-29, 19-17)
Lokomotiv looked comfortable again while facing Unics Kazan, romping to a comfortable double digit lead to take a 2-0 advantage in the series. With Game 3 in Kazan things can still change, but at the moment the Krasnodar contingent looks nailed on for the Final Four. The game was arguably decided from the charity strip, with Lokomotiv pouring 28 of 32 (87.5%) from the free throw line, so Unics will have to tighten up on personal fouls in Game 3.

Anthony Rudolph set the scoring tone for the winners with 17 points and 6 rebounds, while Eugeny Voronov, Malcom Delaney, and Simon Krunoslav all drained 14 points through the buckets. Derrick Brown chipped in with 12 points in the win and Nikita Kurbanov netted 11 points.

CSKA Moscow vs. Astana, 110-60 (27-15, 25-17, 27-11, 31-17)
CSKA Moscow crushed Astana for the second consecutive game to take a 2-0 lead in the series and put a foot in the Final Four. Astana is the only non-Russian club left in the VTB League this season, but on this evidence the club will not be around for much longer as CSKA is in formidable form. The reigning VTB champions put 50 points on their rival and are on course to win the title for a record 6th time. The Euroleague Final Four giant looked in blistering form throughout, but really pulled away during an impressive second half, where scoring in the paint went into overdrive (CSKA scored 58 points in the key during the game).

Pavel Ilin led Astana with 16 points, while Anton Ponomaryov was good for 15 points.

Zenit St. Petersburg vs. Nizhny Novgorod, 80-84 OT (18-14, 15-26, 17-14, 21-17, 9-13)
Nizhny Novgorod edged Zenit in a back and forth encounter in Russia’s second city. The clubs could not be separated through regulation time, but the visitors claimed the victory after a tense overtime period. The win meant that Nizhny tied the series at 1-1 and importantly the club takes Zenit back to Novgorod for the next two games. When the clock stopped after 40 minutes the score was locked at 71-71, but in the added frame managed to steal the contest and celebrate a win.

Walter Hodge topped the scoring with 20 points for the downed St. Petersburg club. He was aided by Evgeny Valiev with 12 points and Dejan Borovnjak with 10 points.