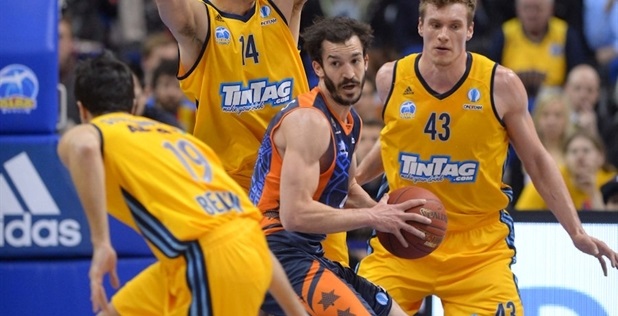 Valencia Basket became the first club to progress to the Eurocup Semifinals by coming through a tricky two games against ALBA Berlin. In fact the Spanish team lost Game 2 78-73 to the German club but still progressed to the next phase thanks to a superior aggregate score.

Despite losing in the German capital, Valencia had done enough with home court advantage last week to steer a path to the Final Four. It is the third consecutive season that the club has entered the semis of the tournament and this year Valencia will have one eye on the Eurocup title. While ALBA Berlin will no doubt feel disappointed, the club has had a solid Eurocup campaign and will turn attention to the German BBL where the club remains in contention.

Valencia´s success comes courtesy of the cruising 86-54 victory in Spain last week, a high margin win that proved the difference over two legs. Berlin made a good game of it at home this week, but the German club could not make up that 32 point difference from a week ago. Valencia must now wait until the results from Wednesday´s game between Hapoel Migdal Jerusalem and Nizhny Novgorod to see which of the clubs will meet them in the Semifinals.

First quarter
ALBA´s tactics at the start of the game might have puzzled a few as the German team emerged from the tip off in defensive mood. Considering the hosts had a 32 point margin to breach it seemed an overly negative tactic from coach Sasa Obradovic. Luckily Berlin´s cause was helped by the fact that Valencia too were playing defensively, obviously content to sit on their considerable Game 1 lead. Despite the cagey start David Logan opened the scoring with a triple for ALBA, but Pau Ribas responded with his own from downtown for Valencia. Sam Van Rossom and Justin Doellman sparked the Spanish team to life and propelled a mini 1-8 run to give Valencia early command at 9-13. Reggie Redding paced Berlin with four points to close the gap, but Oliver Lafayette struck late in the first to give Valencia a 16-19 lead.

Second quarter
Pablo Aguilar extended Valencia´s lead with a dunk to open the second stanza, but ALBA sprung into life with a 6-0 run that was ended with a Leon Radosevic layup to give the Germans the lead at 22-21. Redding, Levon Kendall, and Radosevic kept the board ticking for the hosts, but Valencia stayed in touch enough to know that a semifinal berth looked good. The Spanish visitors closed shop after a Ribas two pointer and shut out Berlin for the final six minutes of the half, with the exception of one triple. The potent defensive display had put Valencia Basket in charge at the midway stage, with the scoreboard making unhappy reading for the home fans inside the OS World Arena (33-36).

Third quarter
Early in the second half Vladimir Lucic dunked to extend the lead to five points and celebrate his return after a lengthy injury layoff. The away team managed to maintain the five point cushion throughout the early part of the third and then extended to seven points (44-51) when Bojan Dubljevic scored from a layup. ALBA kept in touch through Kendall, but Valencia was in a defensive groove and hurting Berlin in the paint on offense. Lafayette and Dubljevic teamed up to extend the lead to double digits 47-57 and with it all realistic chances of Berlin progressing had gone. However, the German club was not out of this game and the home team was sparked into action from a rim rocking dunk from Jonas Wohlfarth. Akeem Vargas then beat the buzzer for Berlin to close the gap to four points with the score board reading 55-59 after 30 minutes.

Fourth quarter
With the two game series beyond them, the ALBA Berlin players still had 10 minutes to put on a show for the home fans and retain some pride. Wohlfarth and Sven Schultze both found net to tie the game at 59-59 before Lafayette and Redding exchanged threes. Redding was still hitting scores and downed from beyond the arc to finally get ALBA the lead again at 72-70. Redding and Kendall continued to score down the stretch to secure the win for the hosts, but ultimately leave the competition for another season.

Redding scored 24 points overall, 12 of them arriving as he drove the team to success in the fourth quarter. Redding also added 7 rebounds and 7 assists for a winning ALBA effort.

Dubljevic secured 14 points for a losing but still celebrating Valencia, while Van Rossom had 10 points.