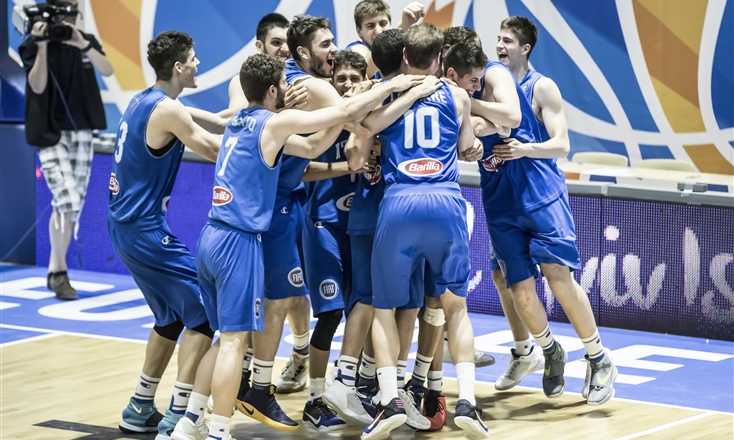 The U20 European Championships reached the Eighthfinal stage on Wednesday as the 16 nations clashed to set up Friday’s Quarterfinals. Through the contest on Day 5, we have learned the eight countries that will compete for a berth in semifinals. Lining up for the quarters are Spain, Turkey, Italy, Lithuania, Czech Republic, Germany, Ukraine, and Latvia.

Latvia controlled the first half of its clash against Sweden and rode out the second half to see out the win. A commanding 9-17 first quarter led to a 10-18 second and a big 19-35 lead through halftime. Sweden improved in the second half, but only after Latvia has sewn the game during the third act. Rihards Lomazs paced the victory with 17 points, followed by Klavs Cavars with 11 points and 6 rebounds.

The Czech Republic needed an overtime win to secure passage through to the Quarterfinals of the 2016 U20 European Championships. The Czech’s looked good with a 23-15 first quarter success, but Slovenia used an 11-18 reverse in the second to make it close through the long break, 34-33. The teams traded the third and fourth quarters and through regulation the game was tied on 66-66. In OT the Czech Republic managed to edge a nervy period and take the win. Matej Svoboda drained 26 points in the win.

Reigning champs Serbia were taken out of the 2016 running by a resilient Italy. The Azzurri reached the last eight thanks to an excellent second half. Through the midway point, the game was close, but Serbia led 36-30 and was on course in its title defence. It remained that way as the champs won 17-15 in the third act to make it 53-45 through thirty minutes. The Serbs were then stunned as the Italians plundered 25 points and kept the champions at 12 to grab the win in Q4.

The Ukraine scored the most points of the night and reached the U20 European Championships as a result. Belgium kept pace in the first half, but were swept aside in the second. A huge first quarter ended 24-27 in Belgian hands, and at halftime Ukraine had wrestled a 48-44 advantage. The team followed that with a huge 28-9 third act that secured the win and allowed a stroll in the fourth quarter.

Turkey is the form team so far. The nation eased through the groups unbeaten and dealt with the French here in its trickiest encounter so far. Through the long break the teams could not be split, sharing the scoreboard with 39 points each. The Turks took control with a 22-16 third period before securing the win despite a testing fourth quarter from France. Omer Yurtseven led the win with 19 points and 9 rebounds.

Host nation Finland was undone by a rampant Lithuania in Helsinki. The home teams’ dream came to an end, but the Lithuanians seem in the mood and could be a title threat. After a close 15-16 first act, Lithuania used an 11-26 second to dominate the game. The second half proved a formality to the straight, even if Finland did provide a moral boosting fourth quarter rally. Tautvydas Paliukuanas led the winning charge with 19 points.

Something had to give in this contest, an ultimately the Germans made it to the last eight with a win over Israel. Germany had finished second in Group A, while Israel topped Group B. However, that counted for little as Germany edged proceedings in the fourth quarter and took the win.

Spain was a class above Hungary and eased into the Quarterfinals. The win was mostly settled in the first quarter as Spain drained 30 points and kept Hungary to 20 points. The Spanish extended through the second quarter and maintained its first quarter advantage through thirty minutes. Spain had points in the bank and eased down the straight in the fourth.