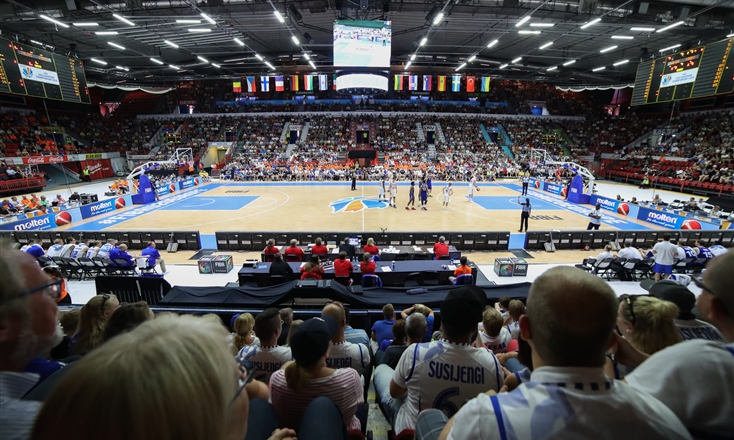 The U20 European Championships continued on Tuesday with eight games across Groups A through D, with plenty of exciting action along the way. Turkey continued its march and remains unbeaten, while Germany maintained pressure on the Turks in Group A. Spain and Finland dominated in Group B, while Groups C and D were filled with very close contests.

Germany snatched victory from Lithuania at the death, winning this tight classic late on. Lithuania had used a huge 10-24 second to propel to a 57-64 lead through thirty minutes. Germany, however, carried the momentum from a 26-21 third act and carried it into the fourth. The Germans went to the closing seconds before claiming the big win. Kostja Mushidi was huge in clawing Germany back, grabbing 26 points in victory.

Turkey, the hottest team in the U20 European Championships so far, had too much for Hungary and eased to victory. The Turks remain unbeaten and are sitting pretty in Group A with a 3-0 record and are already guaranteed for the next round. After a close 15-12 first frame, Turkey stayed a step ahead of the Hungarians and eased to victory by extending through each quarter. The winners dished out an impressive 24 assists in an unselfish attacking performance.

Spain dominated Israel in a big victory, moving to 2-1 in Group B in the process. The Spaniards finally clicked at the U20 European Championships and dropped 54 points through the middle quarters. Indeed a 30 point haul in the third stanza allowed a stroll to victory in the fourth act. Israel was damaged by a collapse in Q2, where the team only produced 9 points. Marc Matti paced Spain with 11 points and 8 rebounds.

Finland shocked France on Day 3, coming away with a victory. Of course, the Finnish has home court advantage in Helsinki and have used the partisan crowd well. The hosts actually trailed 8-15 after a dismal first quarter. The French held a 27-31 lead through the long break, but fell as Finland sparked in the third frame. The home team was good for a 24-15 run that changed the game and pushed them to victory. Lauri Markkenen was a driving force in the win, plundering 27 points.

Serbia remained on course with an edgy win over Slovenia. An 18-15 win in the first quarter set up the Serbs, but Slovenia roared back with a 9-19 second that gave them a 27-34 advantage at halftime. Serbia went big in the second half and drained 56 points to ensure victory in the fourth quarter. Vanja Marinkovic scored 19 points and took 7 boards.

Ukraine and Latvia played out a classic that was decided in overtime by a single score. Latvia had opened a 22-32 lead at halftime and looked to be cruising. That double digit lead was chipped into through a huge 22-10 run in the fourth that tied proceedings at 65-65 through regulation. The OT period was tight, but ultimately Ukraine edged the win. Sergey Pavlov and Sviatsolav Mykhailiuk scored 17 points apiece in success.

In another tight encounter on Tuesday, Sweden downed Italy in a frantic fourth quarter. A strong first half for the Azzurri has given them a 52-48 lead through thirty minutes. The Italians could not hold it though and Sweden scored 21 points in the fourth and stopped their opponents at 12 points to taste victory. Simon Birgander hauled a double-double of 14 points and 11 rebounds for Sweden.

The close games came thick and fast on Day 3. Belgium and Czech Republic played their part in the excitement. After trailing 14-23 during the first split, Belgium drained 27 points to snatch a 41-39 lead through the long break. A high scoring third saw the Czech’s claw a point back before Belgium wrapped the win during a close fourth quarter. Tim Lambrect led the win with 20 points and 8 rebounds.