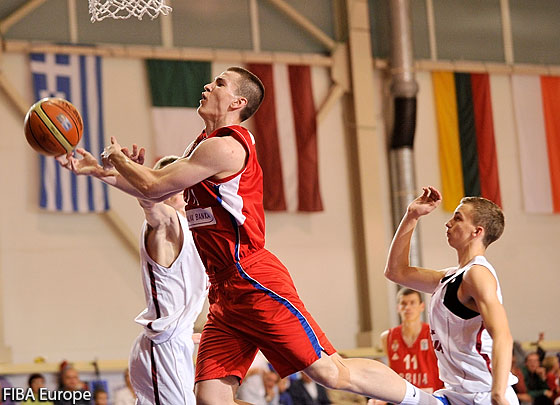 The U16 European Championships are taking shape as the quarter-final stage was set tonight, with eight teams progressing to the next stage. Serbia, Latvia, Turkey and Bosnia and Herzegovina emerged from Group E, while Italy, France, Spain, and Germany progressed from Group F. Here is how the action played out.

Group E
Bosnia and Herzegovina used a massive finale to defeat Lithuania 89-80 and progress into the quarter-final of the U16 European Championships. Lithuania turned in a big first quarter to send home 27 points and hold a lead of 23-27 after the first ten minutes. Bosnia hit back in the second frame by taking the period 24-19 to hold command at 47-46 as the halftime buzzer sounded. Lithuania emerged victorious after a cagey third quarter and reduced the lead with the scoreboard reading 64-64 and the game locked. The game remained tight throughout the first five minutes of the fourth stanza before Bosnia and Herzegovina exploded in the last four minutes to cap the win.

Bosnia’s victory meant that Croatia could not qualify even if they beat Turkey in Group E. As it was Turkey claimed victory regardless with a comfortable 85-73 win that sent them through to the next round as the second placed team. Not that the first quarter showed that as the team could not be separated during the 10 minutes, but Croatia outpaced Turkey to hold a 15-16 lead at the first break. Another one point quarter win followed in the second as Croatia doubled its lead with a 21-22 stanza to hold a 36-38 advantage at halftime. Croatia found another gear in the third quarter and stunned Turkey by scoring 25 points and conceding just 18 to lead 54-63 with 30 minutes on the clock. However, Turkey erupted in the fourth frame as Croatia collapsed; the Turks nailed 31 points and held their opponents to just 10 to win the game.

U16 European Championships host country Latvia faced a slick Serbian team and came up short, losing 51-59. The Latvians finished the group in third and qualify for the Q/F stage, while 2013’s beaten finalists Serbia booked their place in the next round with their sixth consecutive win, serene progress indeed. Serbia charged into the lead in a solid first quarter that saw them lead the game 13-20 at the end of period one. Spurred on by the home crowd, Latvia hit back with a 12-9 second frame to cut the deficit to 25-29 at the long break. A back and forth match continued in the second half as the Serbs won in the third, taking the stanza 10-18 to lead 35-47 at the final split. Latvia responded once again by winning the fourth quarter 16-12, but ultimately fell short of success.

Group F
Both Italy and France have impressed at times during this tournament, but it was the French who found what was needed for victory here, claiming a 62-79 win. Les Bleus set the tone for the win with a solid first quarter that saw them emerge after ten minutes with a 16-27 lead. Italy recovered composure in the second frame but could only cut the deficit slightly, putting the score at 34-42 with the teams heading into the locker room. The Azzurri did better in the third quarter though and set about the French defence while looking stronger at the back. After 30 minutes on the court the score was 50-53 in France’s favour and it was game on. However, France had the extra gear to move into during the fourth quarter and blitzed Italy 12-26 to ease down the stretch. France topped Group F and Italy also qualified in third place.

Germany joined France and Italy in the quarter-finals by coming in second in the group with a 4-1 record, capping it off with a 64-56 win over Russia. The Germans paced through the first quarter but were followed by Russia to a 17-14 score after 10 minutes. Russia hit back in the second frame and managed to snatch the lead at the long break, winning the period 12-17 and holding a 29-31 lead at the midway point. The Russians extended their advantage through the third stanza, winning the period 14-17 to lead 43-48 with just the last quarter left. Germany managed to claw back at the ailing Russian ranks as nerves took hold; the Germans won Q4 and the game after a 21-8 run in the last 10 minutes.

Defending champions Spain lived to fight another day after gunning down Poland 78-54 in comfortable fashion. The Spanish needed the win to progress and found it to join Germany, Italy, and France in the next stage of the U16 European Championships. The winners used a big first half to set up the victory, powering to a 27-15 lead in the first quarter and winning the second 13-7 to hold a commanding 40-22 lead at halftime. Poland won the third quarter 18-19, but the damage had been done and Spain cruised to the win after a 20-13 final frame.