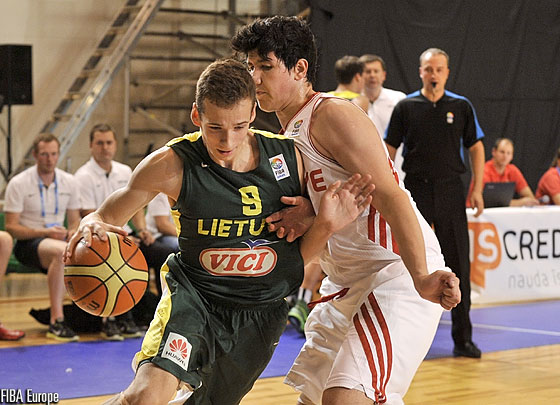 The U16 European Championships are underway in Latvia and there was plenty of action across the groups on day 1, with reigning champs Spain getting their title defence off to a good start.

Group A
Serbia emerged victorious with a relatively comfortable 79-55 win over Finland in Ogre. The teams were tied at 8-8 after a low scoring first quarter, but Serbia found a scoring rhythm in the second frame and scored 29 points while Finland managed 18. After a halftime score of 37-26 the Serbs went through the gears to win Q3 31-14 and then cruise through the fourth stanza to take the game. Borisa Simanic led the Serbian team to victory with 15 points.

It was a good start to the U16 European Championships for Turkey as the team edged Lithuania to win 76-68 in Game 1. Turkey looked impressive through the first 10 minutes and led 27-23 at the first break, but lost the second quarter 15-17 to put the score on 42-40 at halftime. Lithuania continued its ascension in the game and took the third quarter 13-18 to lead 55-58 with ten minutes left. Turkey responded with a 21-10 winning frame in the fourth to secure the win. Tadas Sedekerskis paced the winning effort with a huge 35 points, while also claiming 8 rebounds in the game.

Group B
Tournament hosts Latvia pleased their home fans in Ogre with a 67-74 win over Greece. Latvia scraped a lead in a tight opening stanza, sneaking to a 14-16 lead at the first stop, but a 21-19 Q2 from the Greeks tied the game at 35 apiece at the long break. The hosts outlasted Greece during the third quarter, winning the frame 19-23 and then extending through the fourth quarter to secure a confidence boosting opening win.

Bosnia & Herzegovina scraped to victory over Croatia, taking the game by one point with the final score at 64-65. Croatia had looked down and out in the first half, but a 14-0 run in the third frame opened the game up and the fourth quarter was a basket trading exercise in tension. Eventually Amar Gegic produced a game winning lay-up to hand the spoils to Bosnia & Herzegovina in the most dramatic of fashions. Dzanan Musa had a great game in victory, scoring 18 points while also taking 7 boards and 5 dimes.

Group C
Germany looked good in the opening Group C encounter as they saw off Poland 72-60 in Grobina. The Germans looked strong from the first tip off, pacing to a confident 23-15 lead after 10 minutes on the court. The team maintained that eight point advantage at the midway point, with the halftime scoreboard reading 39-31. Poland won its first and only frame of the game, taking the third quarter 12-14, but Germany replied in the fourth to cruise down the straight.

It was a winning start to the U16 European Championships for France, and it come in the most convincing of manners as they crushed Denmark 87-33. On this evidence the Danish are in danger and never looked like troubling a slick France outfit. The winners won each quarter (27-11, 17-11, 28-3, 15-8) and looked good in defence, but it could be argued that the Danes France look good. Bathiste Tchouaffe had a double-double in the winning effort, securing 16 points and 10 rebounds in the game.

Group D
Defending champions Spain got this year’s tournament off to a good start by shutting out Ukraine 81-46 in what was a bit of a demolishing job. The Spanish paced to a comfortable 21-12 after 10 minutes, but Ukraine stopped the deficit widening with a 16-16 second quarter. In the third Spain shut up around the perimeter and stopped the Ukraine players at 9 points while pouring in 21 during the period. The fourth quarter was a formality as the Spanish eased to victory. Maxim Esteban was the top scorer in the game, securing 14 points for a victorious Spain.

Italy looked good in defeating Russia 66-41 in Grobina in Game 1. The Italians won a low scoring first quarter by hitting 10 points and holding Russia to just 4 points. In the second frame Russia hit back to win the stanza 10-15, making it a one point game (20-19) at halftime. Italy exploded in the third and once again looked good in defence, holding the Russians to 9 points while streaming in 27 of their own. That blistering third frame made the final period an easy stroll for Italy.