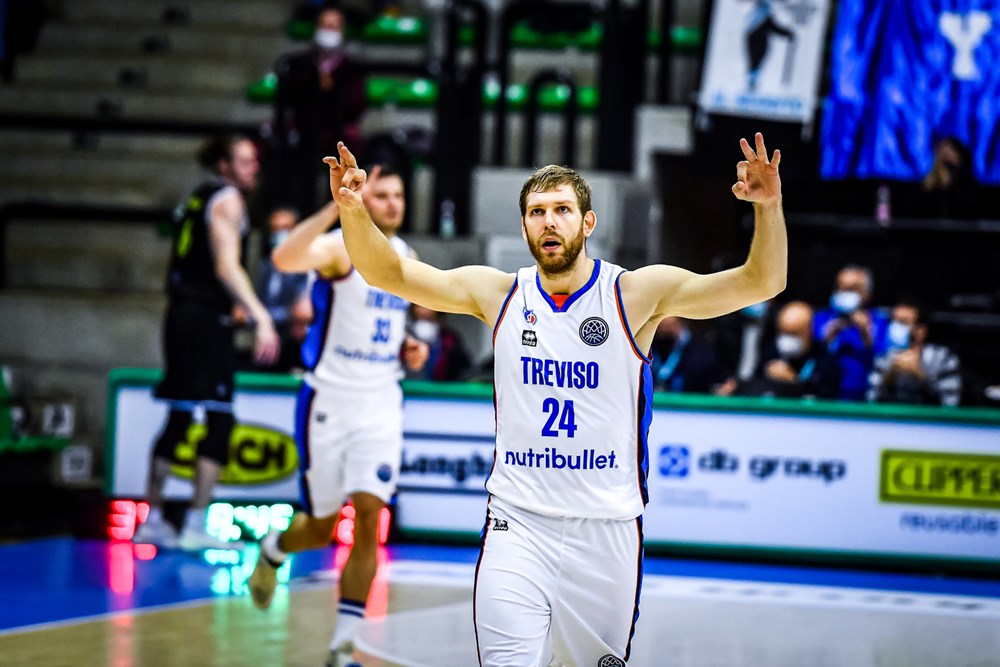 Treviso back on European map via FIBA Champions League

Since 2012, basketball in Treviso searched for a way back to the European map. Coach Massimiliano Menetti started something worth following. His Nutribullet Treviso is up to 3-0 in their first-ever international season, leading the way in Group D of the Basketball Champions League Season Six.

The colors are somewhat different in 2021 than in the glory days of the Benetton Treviso. Still, the same old Palaverde arena is rocking week in, week out with the way Nutribullet Treviso is playing.

Falco Szombathely is the Hungarian champs who came into town as the other 2-0 team from the group, but they held on for just 20 minutes, trailing by five at the break.

The trademark Menetti defense held the black-and-yellow team to just 60 points, more than enough for a 68-60 win, protecting Treviso’s perfect record, and making them only the fourth 3-0 team at the halfway point of the Regular Season – the other three are MHP Riesen Ludwigsburg, Unicaja and BAXI Manresa.

Tomas Dimsa struggled shooting the ball, at least from inside the arc, because he went 5-of-11 from beyond the three-point line, getting a team-high 19 points. He wasn’t happy about a 6-of-18 shooting night.

Dimsa was joined in double figures by Giordano Bortolani, who is running away as the clear favorite for the Young Player of the Season award.

Gyorgy Goloman scored 18 with seven rebounds for Szombathely, Akos Keller got an 11-point, 10-rebound double-double, but just 3-of-15 three-point shooting is just not good enough to get you that 3-0 record. Falco drops to 2-1, still ahead of VEF Riga and AEK in this group.

Italians also down at 0-3

While the team from the north of Italy is enjoying the view from the top at 3-0, the team from the south is struggling more than anybody imagined heading into this season. Happy Casa Brindisi can’t get off the mark. An 82-76 defeat to Darussafaka in Istanbul was their third in as many games.

It wasn’t as close as it sounds. At least not according to Nathan Adrian, who had 10 points on the night.

“Shooting 20 percent and taking 35 threes is not going to win you many games. We were lucky to even be in this one,” he said, referencing Brindisi’s 7-of-35 shooting from deep.

Coach Frank Vitucci still feels the glass is half full.

“We have to look forward. Even if we are 0-3, because it’s a short round, nothing is really compromised. Our duty is to do our best until the end and try to see if we can learn the lesson,” play-caller offered.

Aside from luck keeping Brindisi in it, Darussafaka was coming back from Covid-19 positive cases among the coaching staff also played a huge part. The players weren’t necessarily affected by the virus, but just having games postponed and practicing without competing made them look rusty in this one.

“It’s been a long time that we didn’t play an official game,” coach Selcuk Ernak said. The last official game was on October 16, a 59-46 defeat to Turk Telekom in the Turkish League.

“Our second team, their staff helped us, they trained our team during those days (members of our coaching staff) were missing. But to catch the game rhythm was very hard, especially for the players.”

That’s why Darussafaka had 12 turnovers in the first half and was down 13-6 in points from turnovers at that point. However, Ernak’s words of wisdom were heard loud and clear in the locker room. Dacka turned it over only four times after the break and won the points from turnovers 11-2 over the last 20 minutes.

“At halftime, we talked, said that it’s not our identity. We had to change something. Through defense, we got some power for offense. We let them score only 28 points in the second half and got the win,” Dogus Ozdemiroglu said after posting 12 points, four rebounds, four steals, and three assists on the night.

Gabriel Olaseni led the way with 21 points on 8-of-10 shooting. Troy Caupain was also in double digits with 18. Nick Perkins’ 18-point, 12-rebound double-double goes to waste for Brindisi.

VEF Riga picked up their first win of the season, 92-76 over AEK. It was all about Jalen Riley, who made himself a contender for the third-ever triple-double in BCL history.

The guard scored 25 points, had seven assists and six rebounds, done in 31 minutes of work. There were worrying signs in his 2-point outing against Falco Szombathely last time around, so consider this one of the most impressive bounce-back games of the season so far.

“We came out with a sense of urgency, we played aggressively, and we stuck to what we wanted to do, especially defensively,” Riley said, focusing on the team instead of his own numbers.

Coach Janis Gailitis had a similar message. A win like this is worth more than just moving you to 1-2. It can make a team like VEF Riga realize they can move mountains together – especially since they were 0-2 by losing two close games to Treviso and Falco.

“It’s a team win, and it just makes us know that we can play, and we can play better every day,” Riga’s head coach explained.

Speaking of mountains, the 2018 champions have got one to climb over the last three games. AEK is down at 0-3. Coach Stefanos Dedas is still not in panic mode, but…

“The way that we played made me a little bit skeptical about a few things,” he said and went on:

“But I have the character, and I will fix the team, for sure. We need to win the next three games in the BCL to go through to the next round. Two of them are at home. Even if we played bad today, I don’t see a reason why we couldn’t win the next two games.”

Nikos Pappas provided the offense for AEK, 22 points off the bench. The team did not have a bad offensive game, but allowing 92 points on the road is way too much in a close competition like this one.

Hapoel U-NET Holon is another unbeaten team, albeit at 2-0 since their game with Darussafaka was postponed. They handed the Romanian champions U-BT Cluj Napoca their first defeat of the season in a 78-68 score.

Last season, Michale Kyser was a part of the exciting VEF Riga squad, and even after switching clubs, he’s still defying gravity in the BCL. The center had 15 points, nine rebounds, three assists, and three blocks, Holon was a +13 team with him on the floor, and he had three other teammates in double figures.

The coaching change did not affect Holon. Maurizio Buscaglia is off to a flying start. With the Holon faithful behind him and his team, another Quarter-Finals appearance could be in the books for the Israeli squad.

Cluj got 18 points from Elijah Stewart and 17 from Dustin Hogue, both off the bench. U-BT Cluj Napoca can be pleased with their 2-1 record so far because they’ve got two of the remaining three games back at home, in front of their fans, ready to aim for the top of the group.