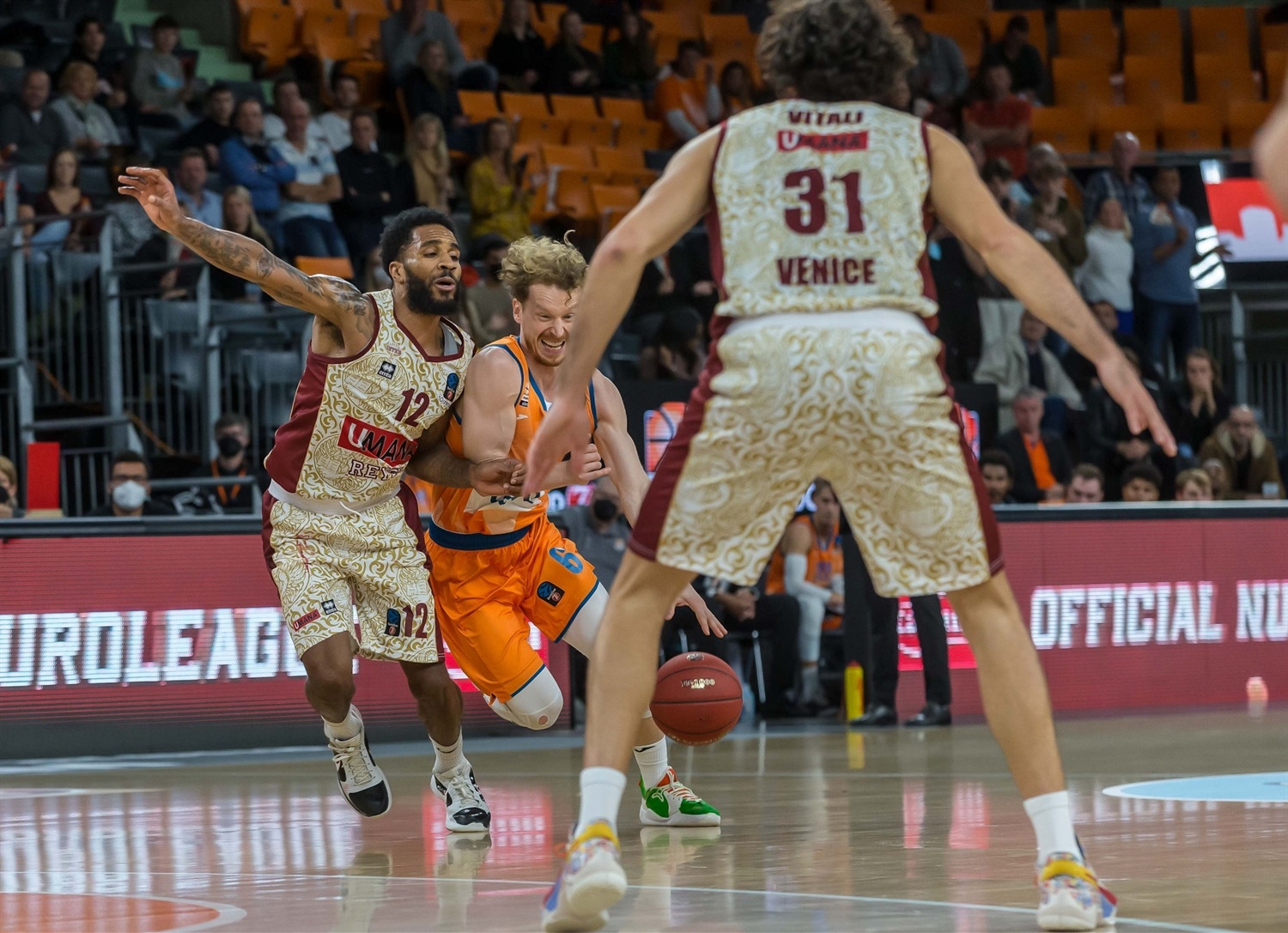 Eurocup Round 3 had it all with comebacks, blowouts, overtimes, first wins, extended winning streaks, and losing streaks snapped. Three teams finished the round with unblemished records: Buducnost, Lokomotiv, and Partizan. First to three wins was Partizan when it edged Joventut 68-67 on Tuesday thanks to Kevin Punter’s heroics. The next day Johnathan Motley led Lokomotiv to a 99-85 victory over Metropolitans. They now share the top spot in Group A. Also, in Group A, Turk Telekom outlasted Slask 89-73 in a game that saw Tyler Ennis return to action for the first time in 11 months. Andorra held off Hamburg 91-77, and Lietkabelis overpowered Trento, with Panagiotis Kalaitzakis providing the fireworks. In Group B on Wednesday, Buducnost rallied past Virtus to take sole possession of the first place; Bursaspor handed Cedevita its first loss with Kevarrius Hayes posting a double-double; Ulm battled from 23 down to stun Reyer, and Gran Canaria grabbed an 89-90 win in Valencia. In Tuesday’s lone Group B clash, Bourg dismantled Promitheas 92-62 for its first victory of the season.

Lokomotiv Kuban Krasnodar remained undefeated in Group B by downing Boulogne Metropolitans 92 99-85 at Basket Hall on Wednesday. Lokomotiv improved to 3-0 in the standings while Metropolitans dropped to 1-2. Johnathan Motley led the winners with 30 points and 11 rebounds. Errick McCollum added 18 points, while Darius Thompson and Andrei Martiuk each had 15 for Lokomotiv. Thompson added 11 assists for a double-double. Will Cummings led Metropolitans with 24 points, Vince Hunter posted 21 with 11 rebounds, and Jordan McRae and Miralem Halilovic each had 12 points for the visitors. Thompson, Martiuk, and Motley led Lokomotiv to its first double-digit lead, 29-18, late in the first quarter. Thompson, Motley, and McCollum fueled a 12-0 run that boosted the advantage to 55-36. Cummings and Hunter got Metropolitans within 12 at halftime. They got help from Halilovic and Jordan McCrae to bring the visitors closer, 77-70, at the end of the third quarter. An unstoppable Motley kept pushing Lokomotiv and made sure the hosts finished off the important home victory.

Kevarrius Hayes and Allerik Freeman shined brightly for Frutti Extra Bursaspor on Wednesday in a 93-84 victory over Cedevita Olimpija Ljubljana at Tofas Spor Salonu. Freeman scored 22 points, Hayes recorded 21 points and 11 rebounds as Bursaspor won its second straight game to improve to 2-1. The result left Cedevita with the same record as it suffered its first loss. Bursaspor outscored Cedevita 50-34 in the middle two quarters to take control of the game. David Dudzinski added 13 points, and Anthony Brown had 10 in his debut for Bursaspor. Jaka Blazic paced Cedevita with 20 points, Marcus Keene and Jacob Pullen scored 16 apiece, and Zach Auguste contributed 11 points and seven rebounds.

Buducnost VOLI Podgorica claimed an 86-82 win against Virtus Segafredo Bologna at Moraca on Wednesday night that improved its record to 3-0 to stay atop Group B. The home team was down 37-48 at halftime and needed 28 minutes to get its first lead, but used a strong fourth quarter led by Justin Cobbs to take a narrow lead in the last 5 minutes that Virtus could not overturn. Milos Teodosic had a shot to tie the game with 8 seconds to go, but he missed under the basket to allow Cobbs to seal the outcome from the foul line on the last possession. Cobbs paced the winners with 23 points and eight assists for a PIR of 29. He found great help from Willie Reed, who tallied 21 points and six rebounds in 27 minutes, and Petar Popovic, who posted 12 points and five assists in 19. The visitors, who dropped to 2-1, had Marco Belinelli and Kevin Hervey as the team’s top-scorers with 15 apiece, while Amedeo Tessitori collected 13 points and six rebounds in the losing effort.

ratiopharm Ulm picked up its first victory of the 7DAYS EuroCup season after rallying from 23 points down in a tale of two halves and beating Umana Reyer Venice 90-83 in overtime at home. Reyer could not miss a three-pointer in the second quarter in a 4-22 run to build a 22-44 lead. Ulm was down 28-51 but had runs of 25-9 and 13-3 to pull ahead by 6 points late in regulation. Reyer forced overtime where Ulm took control with an 8-0 charge to get lock up the win – and a 1-2 record in Group B. Semaj Christon led Ulm with 19 points and seven assists. At the same time, Karim Jallow scored 18 points, Jaron Blossomgame had 17 points, Cristiano Felicio 12, and Thomas Klepeisz added 10 points for the winners. Reyer dropped to 1-2 despite Stefano Tonut scoring 15 points and both Austin Daye and Vasilis Charalampopoulos chipping in 14 points.

PrevPreviousTreviso back on European map via FIBA Champions League
NextParma and FC Porto are victorious on gameday 4 of FIBA Europe Cup.Next