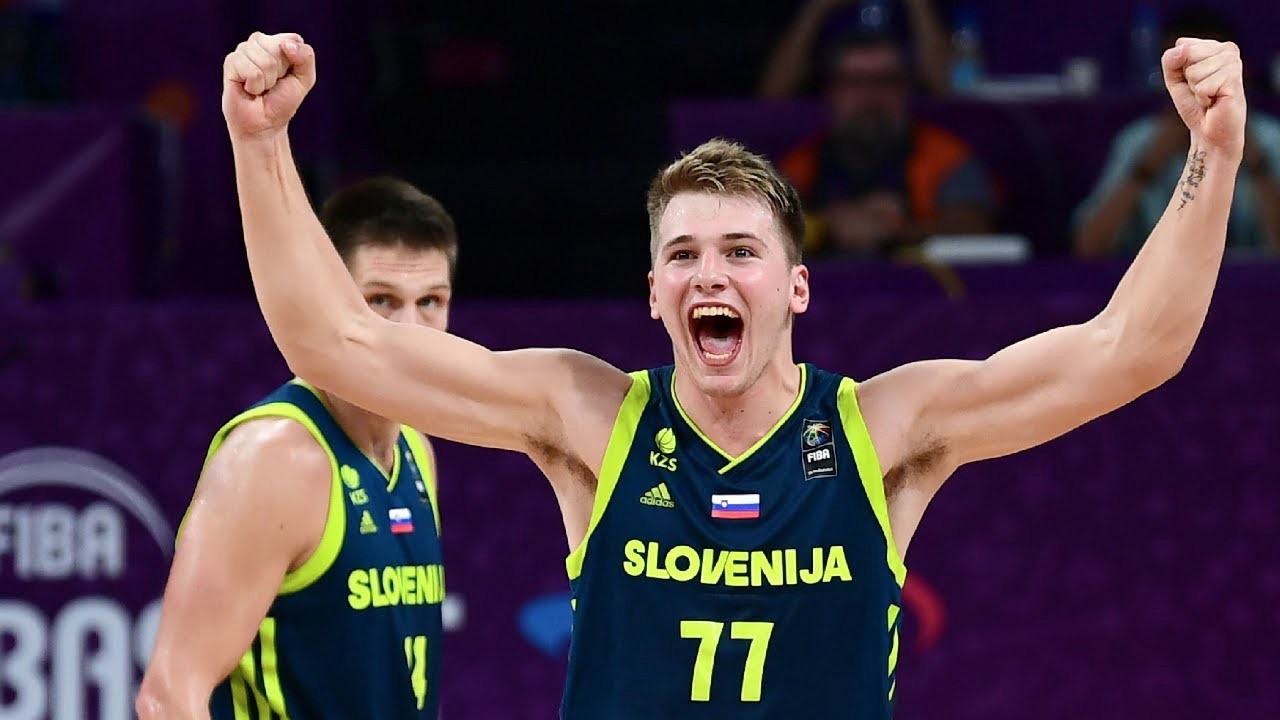 This is why Luka Doncic should be drafted No. 1

The identity of Luka Doncic has always consisted of two inseparable things: his face and an omnipresent basketball.

The future NBA draft pick started holding a ball at the tender age of 7 months old. The sport was his father Sasa’s meal ticket. The elder Doncic, a forward, contributed to Union Olimpija’s Slovenian League championship team in 2008.

A decade later, Luka Doncic, a versatile Real Madrid guard, is widely projected to be taken either first or second in June’s NBA Draft.

The Phoenix Suns own the first pick. Their new Serbian head coach, Igor Kokoskov, takes over a team with 39-43, 23-59, 24-58 and 21-61 records over the past four seasons. Kokoskov served stints over the past 18 years as an NBA assistant with the Clippers, Pistons, Suns, Cavaliers, Magic, and Jazz. The first non-North American NBA head coach born and raised outside the United States, Kokoskov is quite familiar with Doncic’s talents. The 46-year-old coached the Slovenia national team in 2016 and ’17.

“He’s fearless. He loves to compete. He loves to be on the biggest stage,” Kokoskov said of Luka Doncic in 2017, according to ESPN.com.

Meanwhile, the Sacramento Kings hold the No. 2 pick in the 2018 draft. Serbian Vlade Divac, team president/GM, calls the shots for the Kings.

Both Kokoskov and Divac have reportedly expressed interest in building their teams around Luka Doncic (pronounced like Don-Chi-Ch). Both men know all about the late Drazen Petrovic’s impact, swagger, and greatness in Europe and the impact of his move to the NBA.  Petrovic, born before Yugoslavia broke apart and one of the best European players ever became a breakout star for the New Jersey Nets in the early 1990s.

Naturally, comparisons between the Croatian legend and Doncic are inevitable.

But what defines the 199-cm Luka Doncic on the court?

Above all, Luka Doncic has a penchant for winning. Moreover, he has a flair to his passes (pizzazz, really), supreme confidence in his shot from anywhere and that “it” factor. In addition, he possesses charisma and youthful exuberance. He has a solid mix of plays for scoring around the basket with either hand. Indeed, that’s rare at his age.

Croatian mentor Zeljko Pavlicevic guided Cibona in the mid-1980s on a team featuring Drazen Petrovic. And Pavlicevic believes Luka Doncic is on a path to greatness.

“The second most important title in team competitions, after the NBA championship, is now in the hands of Real Madrid and its key player, the young Luka Doncic,” Pavlicevic said in a May interview. “In the short time after winning the NT with Slovenia, and the EuroBasket, this is the second most important title that Luka has won so far. With it, he just positioned himself right next to the best players in the history of European basketball from that time. We are of course talking about Petrovic, Kukoc, Sabonis, Radja, Divac, Pau Gasol, etc. On my seminars in my ZBCA academy (Zeljko Elite Basketball Coaching Academy) I always say … the greatest players are those that win trophies.

“What does Luka have that makes him one of those great players? Well, first of all, he has the psychology of a winner in the key moments of the game. He is a clutch player, has a big selection of shots, layups and he uses his body efficiently with a height of around 2 meters, which allows him good game oversight and assists. He is a good rebounder as well. And one thing that I can say from my experience with working with great players, is that the team believes in him in the key moments, which is a very difficult thing to achieve for such a young player.”

For Luka Doncic, youthful inexperience exists. Even so, Pavlicevic noted that the youngster is developing.

“Now what is he missing? Well, I don’t think it would be fair to be looking for weaknesses in his case. … He is still young, he needs more experience, improvement in technique and, of course, an NBA role,” said Pavlicevic, who piloted Croatian clubs Cibona and Pop 84 to FIBA European Champions Cups in 1986 and ’91, respectively. He’s also led teams in Spain, Greece, and Japan.

“I think this is vital for him, and this will show as for how far can he get in his career,” Pavlicevic told The latest Basketball News. “He still needs to adapt to the NBA, but I hope that he will show the level of talent that Kukoc, Sabonis, Petrovic, and Divac have shown in the biggest basketball competition in the world. And all of us who love basketball will be better for it to watch him play.”

Upbringing in Slovenia, move to Madrid

A high-energy child of Sasa Doncic and Mirjam Poterbin, Luka got his start in basketball in his hometown Ljubljana. In the Slovenian capital (estimated 2016 population: 280,000), Doncic was destined for bigger, better things than typical schoolboys.

As the story goes, the future pinup star attended his first Olimpija Basketball School practice at age 8. Luka Doncic quickly impressed the coaching staff. He earned an instant promotion to an age group for players three years older. And this became a regular occurrence as he would often compete against players three or four years his senior.

Luka Doncic was the quintessential competitor as a young boy. Due to league rules, the 8-year-old Doncic wasn’t allowed to compete at the under-14 level, but he tore through his own age group and played a role off the bench on the under 12-team as well. Eager to spend as much time on the court as possible, Doncic would beg his parents to go practice with the older teams on his off days…

Above all, it was the start of something big. Luka Doncic forged his career path in under-12 and U-13 tourneys in Slovenia and Europe.

As his star rose, he caught the eye of Real Madrid. He moved to Spain to join the well-established youth program. But the future Spanish League All-Young Players Team pick (2016, 2017) and two-time EuroLeague Rising Star (same years) gave a glimpse of his potential at the 2012 U-13 Lido di Roma Tournament. Suiting up for Olimpija Ljubljana, in April 2012, Luka Doncic had a 54-point, 11-rebound, 10-assist masterpiece in the final. He grabbed the MVP award, a regular occurrence in the years to come in U-14, U-16, and U-18 tournaments throughout Europe.

This season, he was also chosen for the EuroLeague Rising Star award.

During the 2018 EuroLeague Final Four in Belgrade, Luka Doncic demonstrated his maturation as a player, bouncing back from 2017 tournament scoring woes. (He had a zero-point game against Turkish power Fenerbahce in the previous Final Four).

In this year’s semifinals, the Slovenian scored 16 points in a victory over CSKA Moscow. He had a steady 15-point (including 8 of 10 at the charity stripe), four-assist performance in the final, guiding Real to an 85-80 triumph over Fenerbahce.

It’s been a whirlwind past year for Luka Doncic. He spearheaded Slovenia’s first EuroBasket gold medal in 2017. Against Latvia, he produced a 27-point, nine-rebound effort in the quarterfinals as Slovenia won 103-97. After that, he made his mark in the semifinals with 11 points and 12 boards with eight assists for good measure as Spain fell 92-72.

Slovenia completed its perfect nine-game run through the tournament by topping Serbia 93-85. Luka Doncic contributed eight points and seven rebounds before he got injured. He received all-tourney honors.

Productivity on the rise

The Slovenian phenom debuted with the Real Madrid top team in LIGA ACB (Spanish League’s top flight) in April 2015, at the ripe old age of 16 years, 2 months. In doing so, he became Real’s youngest player that spring, appearing in five league matches.

Perhaps EuroLeague statistics are a better measuring stick of Doncic’s growth as a floor leader. Continental competition heats up for the teams pursuing titles, which is Real Madrid’s perennial ambition.

“Experience the last two seasons as Real Madrid go-to guy has been invaluable,” Greenberg told The Latest Basketball News. “(He) will face more overall quickness and speed in NBA than he is used to, so that will require adjustments. But competitive and bold and unafraid. Will get knocked around a bit early and how he reacts (resiliency) is key. Don’t know him personally, so it’s hard to project. Mental toughness and ability to commit through adjustment period is key. Interesting dilemma for Phoenix with his national team coach now there.”

Indeed, all of these men played in the frontcourt. Thus, if Luka Doncic goes No. 1, he’d be the first European perimeter player to be taken first.

Speaking to Eurohoops.net, Vassilis Spanoulis in September 2017 dished out this lofty praise: “Players like Doncic come once in 50 years.”

As a 12-to 13-year-old youngster, it’s been reported that Doncic idolized the Olympiacos captain.

“There won’t be too many more guys that come through Europe like that. I want him to follow his dreams, whatever he decides to do. I’m proud of him and the work he’s done all year.”

Luka Doncic is certainly custom-built to be a breakout star of this era in the NBA, with the ever-growing basketball globalization.

For instance, Luka Doncic had 110,000 Twitter followers as of May 21, 2018. At the same time, he had 127,700  Facebook followers. Therefore, he already has a major audience in place before he crosses the ocean to the bigger spotlight. Consequently, his social media fame will skyrocket.

On social media, there’s been playful banter among fans and media about what’s the proper/best nickname for Doncic. In 2017, he posted an Instagram message with the hashtag #TheDon. Other suggestions via social media users: Magic, Slovenian Switchblade, The Duke of Launch-ic, The Slovenian Sensation, Donc Man.

Indeed, as photos on social media attest, Doncic likes to joke with teammates. Also this: He has an infectious smile, which is very marketable for commercial endorsements.

In conclusion, here are key questions about Luka Doncic that will need to be answered:

1. Does Doncic have the athleticism to dominate in the NBA, including on defense?

2. Does he still have upside?

3. Will other NBA players accept a leading role from a 19-year-old, European kid?

Most of all, Doncic needs seasoning against players in the world’s premier league. But he’s already one big step ahead of others in his age group, whether in Slovenia, Spain, or Europe as a whole. Most notably, he’s thrived in marquee events every step of the way.

Finally, Luka Doncic is ready for his biggest leap: going to the NBA. Is he on his way to becoming one of the best European basketball players of all time?