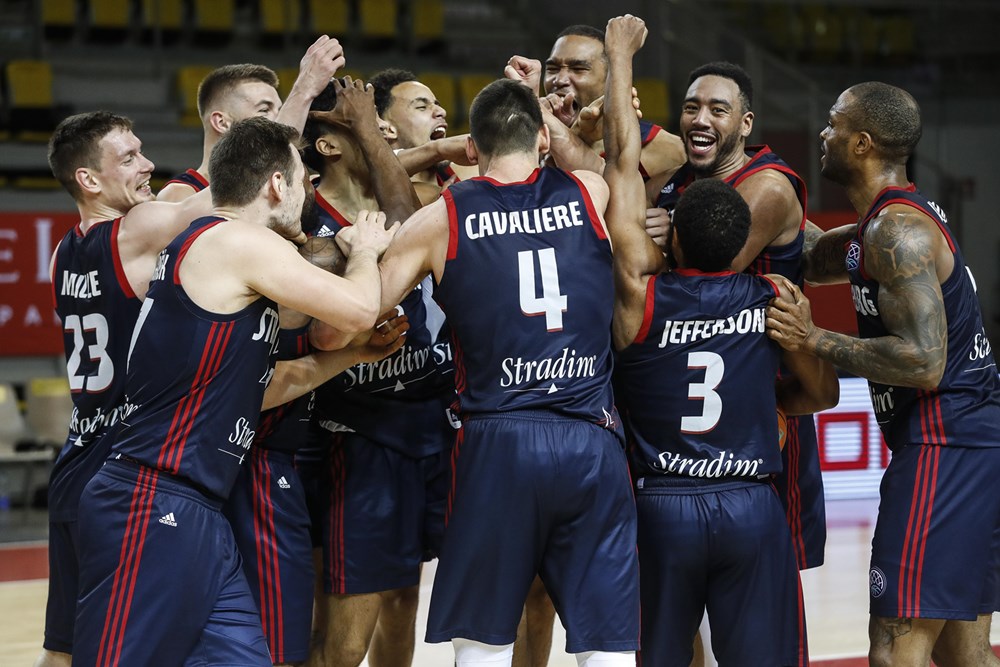 SIG Strasbourg came up big in crunch time and prevailed over Turk Telekom in a hard-fought clash which had the eighth ticket to May’s Final 8 as the prize.

The French team became, therefore, on Wednesday, the only team to qualify to the 2020-21 season-ending tournament despite starting the Play-Offs with three losses in as many games.

At 3-3, Strasbourg takes second place in Group K behind Nizhny Novgorod, who lost to AEK in the other Wednesday game. The Greek team finishes second in the group, also on a 3-3 record, and Turk Telekom finish in fourth place at 2-4.

SIG Strasbourg, which had started the Play-Offs on a 0-3 record, completed Wednesday a total reversal of their fortunes by surging over Turk Telekom in the final stanza to claim a 91-81 and the eighth spot in the Final 8.

Bonzie Colson had 23 points, 4 rebounds and 3 assists and Jaromir Bohacik chipped in with 21 points on 9 of 12 shooting from the floor to pave the way for Strasbourg, who scored 23 points off Turk Telekom’s 14 turnovers.

The French team held their visitors scoreless in the opening four minutes of the fourth quarter and used a 9-0 run to grab control of the game for good, as Turk Telekom didn’t manage to mount a credible fightback down the stretch.

There were no omens of such a stress-free finish during the first three periods, which featured 13 lead changes and never saw either team lead by double digits.

Two Kyle Wiltjer free-throws right at the eight-minute mark of the second quarter capped off an 8-0 Turk Telekom run and gave the Turkish team a 30-25 lead.

But Colson scored with a floater to spark a 9-0 Strasbourg run, which turned a 38-32 deficit into a 41-38 lead for the French side.

Colson poured in six quick-fire points with the start of the third frame, and Strasbourg extended their lead to nine points for the first time, but a Wiltjer hit a triple to stop the rot, and Turk Telekom went back ahead, holding a 69-68 lead at the third buzzer.

But Jean-Baptiste Maille drilled a triple with the start of the final period for Strasbourg to jump ahead, this time for good as the French team tightened the screws on defense and forced turnovers or contested shots from Turk Telekom.

Sam Dekker had 21 points and 6 rebounds, and Wiltjer finished with 20 points and 7 boards for Turk Telekom in losing efforts.

AEK overturned an 11-point deficit in the final seven minutes to topple Nizhny Novgorod 79-78 at home, concluding with a victory in their first BCL campaign outside the Quarter-Finals since 2017.

Nizhny, by contrast, will travel to the Final 8 for the second consecutive time and will do so as Group K winners on a 4-2 record, despite losing the final two games of the group.

The Greek side raced to a 13-4 lead in the opening quarter, but Nizhny quickly balanced proceedings and used a 9-0 run midway through the third period, which Sergey Toropov capped off with a layup 5:55 from the third buzzer, to jump ahead 43-34.

Nizhny held on to that gap and had stretched it to 11 points, 67-56 when AEK called a timeout with seven minutes left to play in the final stanza.

When play resumed, Keith Langford decided to peel back the years and drilled back-to-back triples to inspire the hosts’ comeback, culminating with a Daryl Macon three-pointer 27 seconds from time, for AEK to grab a 75-72 lead.

Kingsley Moses delivered one of his best performances since joining AEK, and he finished with 19 points and 6 rebounds, while Macon added 16 points. Kasey Shepherd had a near double-double of 21 points and 9 rebounds in a losing effort for Nizhny.