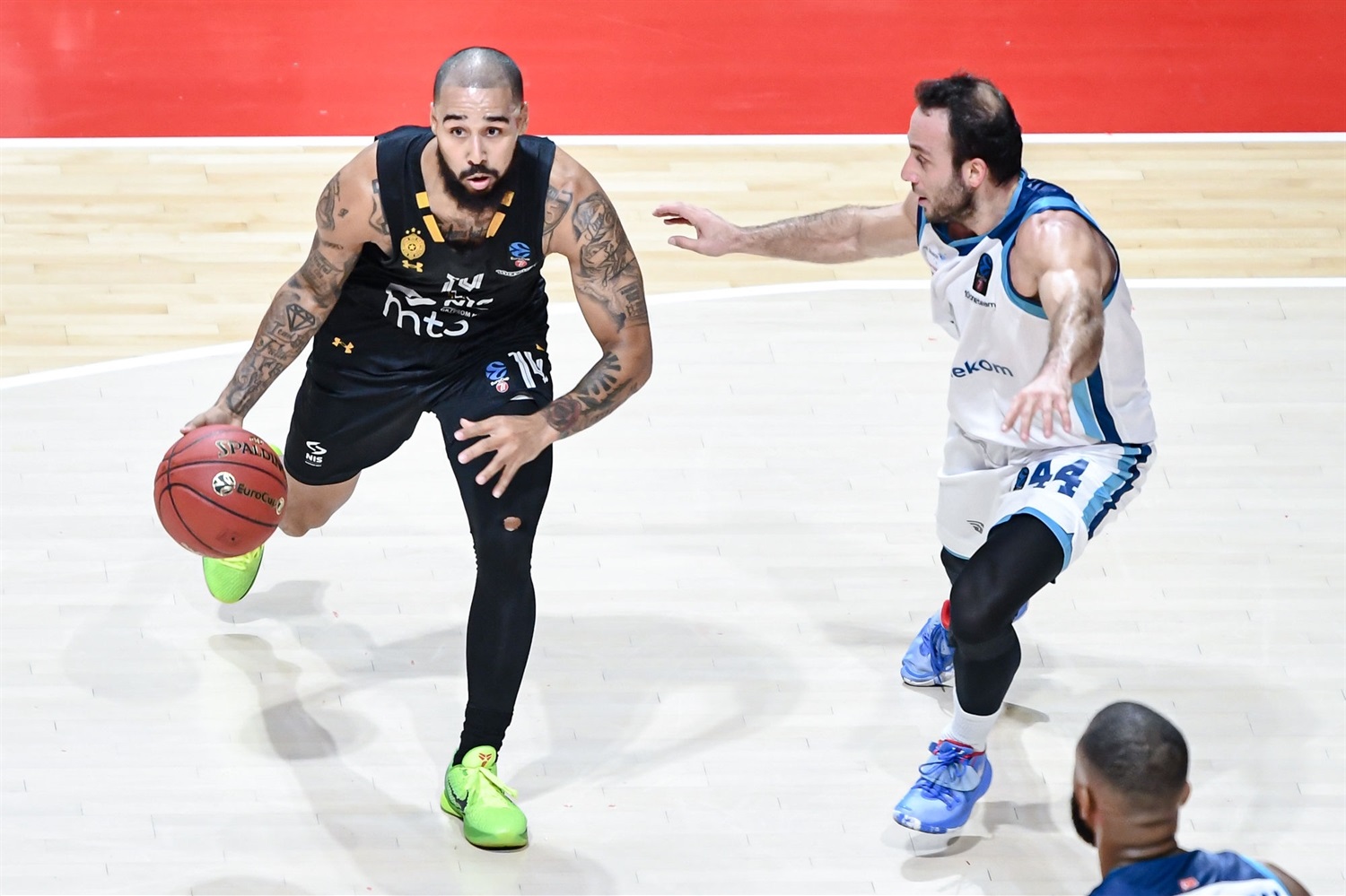 Six teams unbeaten through Eurocup Round 2

Round 2 of the 7DAYS EuroCup Regular Season began on Tuesday with four games which saw only one team manage to protect its home floor. Joventut Badalona did so by blitzing past Hamburg Towers to improve to 2-0. Joventut joined Lokomotiv Kuban Krasnodar atop Group A after it edged Lietkabelis Panevezys in Alan Williams’s return to action. Group A’s third 2-0 team is Partizan, which overwhelmed Turk Telekom on Wednesday. In Group B, Virtus, Cedevita and Buducnost share the top spot. Virtus relied on its defense to hold off Ulm, Cedevita defeated Bourg, and Buducnost bested Valencia in a close finish.

Lokomotiv Kuban Krasnodar escaped Lithuania with a tough road victory after it knocked off Lietkabelis Panevezys 84-85 to remain perfect in Group A. Lokomotiv survived a nearly 3-minute scoreless drought in the fourth quarter and ended up getting the winning basket on Stanislav Ilnitskiy’s three-pointer with 33 seconds to play. Errick McCollum led Lokomotiv with 18 points on a historic night while Johnathan Motley had 17 points, Stanton Kidd 14, and Darius Thompson picked up 12 points and 11 assists for the 2-0 team. The game also saw the return to action of Alan Williams for Lokomotiv after the big man suffered a severe knee injury last November. Panagiotis Kalaitzakis poured in 22 points to pace Lietkabelis, which dropped to 1-1 in the group. Gediminas Orelik and Gabrielius Maldunas both scored 11 points, and Vytenis Lipkevicius chipped in 10 points and nine rebounds.

Joventut Badalona came up with its second straight strong defensive performance in notching a 73-56 home victory over Hamburg Towers. Joventut used runs of 13-4 and 12-0 in the final 13 minutes to move to 2-0 in Group A. Vladimir Brodziansky paced Joventut with 16 points while Andres Feliz scored 14 points and Ante Tomic had 11 points. It was the second consecutive round that the Spanish side gave up just 56 points – beating Dolomiti Energia Trento 56-86 last week. Hamburg dropped to 0-2 despite Jaylon Brown and Justus Hollatz both scoring 14 points and Zachary Brown picking up 11 points.

MoraBanc Andorra broke into the win column in Group A on Tuesday by turning back visiting Dolomiti Energia Trento with a convincing 85-73 victory. The result evened Andorra’s s record at 1-1 and left Trento still looking for its first win. Andorra led 21-10, but Trento followed Jordan Caroline to within 30-28 late in the second quarter. A 16-2 closing run by Andorra before halftime seemed to settle the matter, but Trento rallied to within 55-53 late in the third quarter before the hosts reasserted themselves the rest of the way. Amine Noua top-scored for the winners with 20 points, and Clevin Hannah followed with 11, while Codi Miller-McIntyre was everywhere with a double-double of 10 points and 12 assists. Trento got 24 points from Jordan Caroline, 16 from Wesley Saunders, and 13 from Cameron Reynolds but suffered from poor shooting at the three-point arc and the foul line.

Boulougne Metropolitans 92 edged Slask Wroclaw 86-83 on Wednesday in a thriller decided in the final seconds. Metropolitans improved to 1-1 in the standings while Slask dropped to 0-2. Will Cummings paced the winners with 17 points, David Michineau added 14, Jordan McRae 12, and Miralem Halilovic 10 for Metropolitans. Kerem Kanter led Slask with 18 points, Kodi Justice scored 15, and Jakub Karolak 13. Cummings had 14 first-quarter points and got help from McRae to give Metropolitans a 28-24 edge after 10 minutes. Justice and Kanter stepped up for the visitors, bringing Slask within 49-47 at the break. Kanter and Justice got help from Aleksander Dziewa to put Slask ahead 67-69 at the end of the third quarter. Nobel Boungou-Colo dunked to make it a double-digit game, 83-73, but Slask managed to rally to 85-83. Hunter split free throws, and Justice missed from downtown at the buzzer.

Partizan Belgrade led from start to finish in downing, visiting Turk Telekom Ankara 85-59 on Wednesday night at Aleksandar Nikolic Hall in the Serbian capital. Partizan improved to 2-0 in Group A, while Turk Telekom fell to 1-1. Partizan took control from the get-go and pulled away for good with an 11-0 second-quarter run. The hosts blew the game wide open in the third quarter when a 13-2 spurt led to a 20-point lead en route to the victory. Kevin Punter paced Partizan with 19 points in 18 minutes. Alen Smailagic scored 13, Yam Madar had 12 points, and Aleksa Avramovic collected 10 points, four assists, and four rebounds. JaJuan Johnson led Turk Telekom with 14 points, and Aaron Harrison scored 13 in a losing effort.

In a thriller that went down to the final seconds, Herbalife Gran Canaria grabbed its first win in Group B by edging Promitheas Patras 81-85 on the road on Tuesday. Gran Canaria improved to 1-1 in the standings while Promitheas dropped 0-2. Dylan Ennis led the winners with 20 points, John Shurna added 17 with 11 rebounds, and Artem Pustovyi and Andrew Albicy each scored 10 points for Gran Canaria. Nikolaos Rogkavopoulos led Promitheas with 21 points, Isaiah Miles added 14, Kendrick Ray 13, and Jerai Grant 12. Shurna had ten quick points to give Gran Canaria a 10-15 lead, but Rogkavopoulos, Miles, and Grant allowed Promitheas to get a 25-22 edge late in the first quarter. Shurna kept pushing Gran Canaria, getting help from Chris Kramer and Ennis to give the visitors a 44-49 lead at halftime. Rogkavopoulos took over after the break before A.J. Slaughter, and Ennis helped Gran Canaria tie it at 66-66 after 30 minutes. Ray helped the hosts to a 77-73 lead. However, Ennis and Albicy fuelled a 0-7 run that put Gran Canaria ahead for good. Shurna sealed the outcome from the foul line with 6.4 seconds left.

Frutti Extra Bursaspor roared from 11 points down entering the fourth quarter to stun Umana Reyer Venice 62-70 on the road on Tuesday. The Bursaspor defense held the hosts to 17 points in the entire second half, while Derek Needham led the charge on offense. He finished with 18 points on 4-of-9 three-point shooting plus four assists, Allerik Freeman netted 15 points, and Egemen Guven added 10. Stefano Tonut paced Reyer with 10 points and eight rebounds, and Mitchell Watt had 10 and 6. The result left both teams with 1-1 records in Group B.

Justin Cobbs made a floater with 22.2 seconds left, lifting Buducnost VOLI Podgorica to a thrilling 71-70 win over the visiting Valencia Basket in the team’s home opener on Wednesday night. Buducnost improved to 2-0, while Valencia’s record dropped to 1-1 in Group B. The visitors led for most of the game and by as many as 10 points late in the second quarter. But Buducnost rallied and caught up late in the third and midway through the fourth but never went in front until the final minute and Cobbs’s game-winning basket. Edin Atic paced Buducnost with 17 points, Vladimir Micov scored 14, while Cobbs finished with 10 points and five assists. Klemen Prepelic was Valencia’s top scorer with 14 points, and Jasiel Rivero scored 11 in a losing effort.

Cedevita Olimpija Ljubljana stayed among the leaders in Group B by acing its home opener on Wednesday with a 91-79 triumph over Mincidelice JL Bourg en Bresse. Cedevita is now 2-0, while Bourg continues seeking its first victory. The visitors came out strong and led by double digits in the first quarter, but Cedevita reeled it back with a 10-0 run after halftime to keep Bourg at bay the rest of the way. Edo Muric led five Cedevita scorers in double digits with 21 points. Marcus Keene was right behind with 20, while Jacob Pullen added 13, Melvin Ejim 12, and Jaka Blazic 11. Bourg had a big night from Pierre Pelos, with 21 points. Axel Julien scored 18 points and dished eight assists, while JaCorey Williams picked up 10 points.

Virtus Segafredo Bologna claimed its second victory of the 7DAYS EuroCup season by beating visiting ratiopharm Ulm 87-76 at the Paladozza on Wednesday night. The Italian champs trailed 29-39 midway through the second quarter and 40-44 at halftime before using a strong third quarter in which it held Ulm to just 10 points to grab the lead for good. Virtus remained perfect with two wins in as many games to continue atop of Group B, while the guests fell to 0-2. Mam Jaiteh posted a career-high 20 points plus five rebounds in just 21 minutes to lead Virtus. Jakarr Sampson followed him with 15 points and nine boards for a PIR of 25, Marco Belinelli had 15 and 5 assists, and Kyle Weems and Kevin Hervey added ten apiece for the home side. Semaj Chirston paced Ulm with 14 points, six rebounds, and nine assists, and Cristiano Felicio contributed 13 points and seven boards. Karim Jallow and Nicolas Bretzel also reached double-figures in scoring with 11 points apiece in the losing effort.