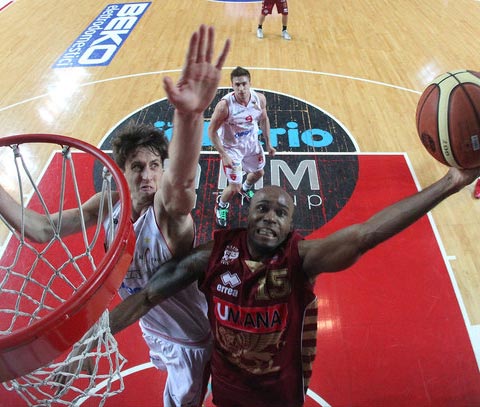 The Italian SerieA quarterfinals will be finished on Wednesday as Varese put away Venice in five games, but the other three series have advanced to Game 7. Sassari will host Cantu on Tuesday, Trenkwalder will travel to Acea Roma Tuesday, and EA7 Emporio Armani Milano will face Montepaschi Siena at home on Wednesday. The winner of the Siena – Milano series will square off against Varese, with the winners of the remaining two series matching up in the semis. Game 1 of the semifinals will be on the 24th and 25th of May.

Cantu built a 21:12 advantage with a 13:4 scoring run late in the first frame. Sassari countered outscoring their hosts 2:9 to pull within two, 23:21, at the close of the quarter. Pietro Aradori dropped in nine for Cantu, while Drake Diener tallied 10. Drew Gordon threw down his third dunk in two minutes of play spanning the end of the first and beginning of the second, to knot the contest at 23. Cantu ran off six unanswered and shortly after built an 11-point lead, 41:30. The guests got to within eight and then cut the gap to five with a three-ball at the horn to head into the break with Cantu up 46:41. Brian Sacchetti put down seven for Sassari and Maarten Leunen countered with seven for Cantu during the second.

Sassari chipped away at their deficit and were able to tie the score at 53 mid-way through the third frame. A Sacchetti triple gave the guests a seven-point lead late in the quarter, but a Stefano Mandinelli deuce in the paint cut the lead to five, 59:64, with the final 10 left to play. A 2:6 start to the fourth put Sassari up nine, 61:70. Aradori tallied 10 in a span of three minutes to return the lead to Cantu with four minutes to play. Nicolas Mazzarino hit a triple and a pair of singles, and Aradori dropped in a pair of free throws to cap a 13:0 run that put Cantu up eight, 85:77, with just under two minutes to play. Sassari got the next seven to pull to within one, 85:84 with a minute left on the clock. The guests wouldn’t score again, while Aradori would connect on a set of charity tosses to wrap up scoring at 87:84 and force a Game 7.

Trenkwalder Reggio Emilia – Acea Roma, 91:82 – Game 6
Trenkwalder used a huge second half where they outscored Acea Roma 62:37 to come from down 16 at halftime to pick up a win out of Game 6 and knot the series at 3 games all. Donnell Taylor tallied 22 for Trenkwalder in just 17 minutes, shooting 5 of 5 from beyond the arc. Luigi Datome tallied up 23 for Acea Roma in the loss.

Acea got the early lead, coming up on top of a 13:19 first quarter advantage behind 11 from Bobby Jones, while Taylor hit eight points of his 22 in the first quarter. The second quarter featured a 1:13 scoring run that allowed the guests to extend their lead to 16 by putting 10 more on the gap with a 16:26 advantage, giving them a 29:45 lead at the half.

Emilia got back into the contest with a 15:3 scoring run to close out the third and pull to within three, 64:67. The final frame opened with Taylor scoring in the paint to cut the lead to one, 66:67, followed by Jordan Taylor and Phil Goss three-pointers to give Roma a seven-point lead again, 66:73. Trenkwalder ran off 11 unanswered to take the lead back, 77:73. The guests got the next five included in a 2:8 run that gave Roma the lead again at 79:80. During the last two and a half minutes the home club forced a Game 7 with a 9:2 scoring run.

Montepaschi Siena – EA7 Emporio Armani Milano, 72:66 – Game 6
Siena knotted their best-of-seven quarterfinal series with Milano at 3 games each with a 72:66 win at home to send the clubs to a Game 7 that will decide who will play Varese in the semifinals. Daniel Hackett led Siena with 18, while Alessandro Gentile tallied 18 for Milano.

Siena fell behind 7:14 mid-way through the first after a seven-point run by the guests, but earned the lead with a 10:2 scoring run of their own late in the frame to go up 17:16. Marco Carraretto hit two triples for the hosts to finish out their scoring in the initial 10, while Gentile hit a jumper and Keith Langford dropped in a pair of singles to give Siena a 23:20 lead after one quarter of play. Bobby Brown’s three-ball opened scoring in the second, which was the start of a 7:0 run that gave Montepaschi a 30:20 advantage. Hackett split a part of free throws to extend the lead to 13, 38:25, and would be the last points scored for over three and a half minutes until Leon Radosevic would sink two charity tosses for Milano. Tomas Ress hit a jumper for Siena to close out the half of scoring with the hosts up 40:27 at the 20-minute mark.

At the half-way point of the third 10 Marques Green hit the cords with a long-ball to cut the Siena lead to five, 46:41. Ioannis Bourousis connected on a pair of singles shortly after that pulled Milano to within three, 51:48. Hackett dropped in a set of freebies to get the lead back to five, then Ernest Bremer split a pair of Singles to send the game into the final frame with Siena up four, 55:51. Aleksandar Rasic was the first to tally points in the fourth, scoring in the paint. Malik Hairston completed a three-point play, then Nicolo Melli dropped in two in close to bring Milano to down one, 57:56. Hackett teamed up with David Moss to score eight unanswered and give the hosts an eight-point lead with less than four minutes on the clock. The rest of the way was played out on the free throw line as eight of the final 10 points scored came from the stripe. Milano outscored their hosts 4:6 in the final minutes, but Siena did the job and forced a Game 7 with a 72:66 victory on their home court. The final game will be hosted by Milano on Wednesday.

Hackett’s 18 lead Siena, with Brown contributing 15, and Marco adding 13. Milano got 18 from Alessandro, 16 from Bourousis, and 11 from Hairston.