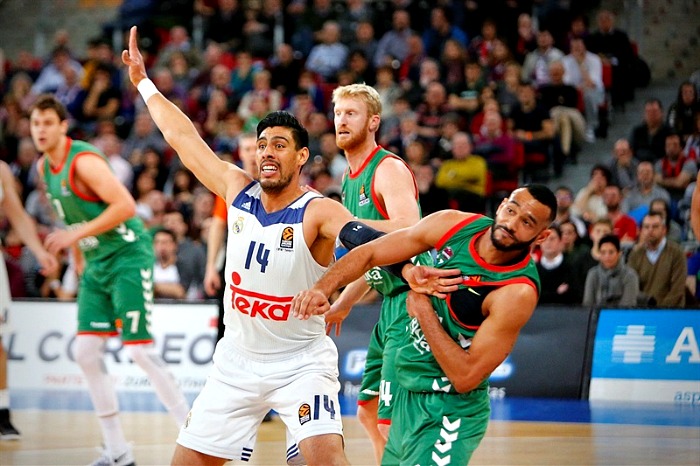 Real Madrid is on a roll in the Turkish Airlines Euroleague. The Spanish superpower is now on a seven-game winning streak, after defeating Baskonia Vitoria Gasteiz in Round 21. Now at 16-5, Real Madrid surges to the top of the league standings. For what it’s worth, they only have a one-game lead over some dangerous competition. Defending champs, CSKA Moscow and Greek powerhouse have identical 15-6 records and can easily compile enough wins so that a slip up by Madrid would mean another shake-up at the top.

These are two of Spain’s top teams and as expected both clubs played hard in what was arguably a crucial game in the round. This would prove to be an eye-opening game for fans and pundits alike. Real Madrid’s Luka Doncic was amazing as he flirted with a triple-double, giving Baskonia all sorts of headaches. The 17-year-old would end the night with 16 points, nine rebounds, and six assists. Jeffrey Taylor would chip in 16 points of his own. As always, Sergio Llull was productive as the team’s main facilitator, recording eight assists.

Madrid would begin both halves with a lot of energy, setting the stage for them to dictate the tempo, a strategy they like to employ. A crafty lay-up by Doncic in the third quarter would set up Real Madrid with their biggest lead of the game at 57-68. Baskonia would cut into it, but it was not enough and their rivals would come away with the win.

Baskonia would see Rodrique Beaubois lead the team with a game-high 20 points. Johannes Voigtmann dropped a double-double with 10 points and 13 boards.

The loss sends Baskonia (12-9)sliding down into seventh place in the standings, but expect them to bounce back in a favorable match-up against Maccabi Tel-Aviv in the next round.

This was a contrast in styles, with Galatasaray having the advantage in the paint while Panathinaikos having the better game from long range. The disparity was made more evident with Panathinaikos tying the Euroleague regular season record for most three-pointers made with 16. They hit 16-of-31 shots from deep and when a team can efficiently put up extra points on the board with that much accuracy, it makes it tough to match them point-for-point. James Feldeine scored all of his 15 points from beyond the arc.

Vladimir Micov was efficient in scoring his 14 points for Galatasaray. He and big man, Tibor Pleiss (15 points, five rebounds), would lead the charge for the hosts.

The win moves Panathinaikos up one spot in the standings to sixth place as they improve their record to 12-9. Galatasaray remains in the league cellar with their 6-15 slate.

Crvena Zvezda was one of the hottest teams in the league coming into this game and it was a bit of a shocker for them to drop this one at home. The end of their impressive seven-game winning streak gives them a 12-9 record and they hold onto fifth place in the standings. The much-needed win boosts Anadolu Efes into the Top 8.

Red Star’s normally solid defense was unable to contain Anadolu Efes’ Derrick Brown, who exploded for a big double-double performance, recording 20 points and 11 rebounds. Credit does not go all to him. The damage he did on the inside forced Crvena to double-team him on defense. As a result, DeShaun Thomas found himself open on the outside and the shooter took full advantage of his opportunities, knocking down 3-of-6 shots from deep en route to his 17 points for the night.

Credit has to go to the defensive effort and hustle Anadolu Efes brought in this game. The team got 11 steals and it led to some easy baskets in transition.

Red Star has very little time to regroup as they are set to face the defending champs, CSKA Moscow on the 10th.