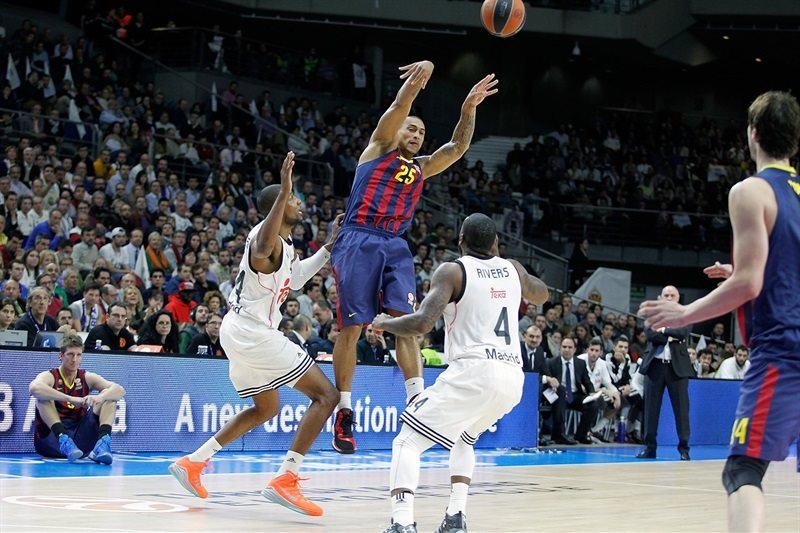 Real Madrid gave Barcelona a Basketball lesson on the hardwood in the Spanish capital as the teams clashed in a mouth-watering contest in Group E. The two Liga Endesa teams butted heads at the opening of Round 6 of the Top 16, and Madrid’s victory poured more misery upon a Barcelona team that is struggling at home and abroad. In the other games on Thursday evening, Maccabi Electra Tel Aviv edged Galatasaray Liv Hospital Istanbul, and Zalgiris Kaunas grabbed an important road win over Crvena Zvezda in Group E.

Group E
Real Madrid pounded great rival Barcelona in the Spanish capital, downing their Catalan guests 97-73 in a demoralizing and humiliating collapse for Barca. The club is struggling for form, languishing in fifth place in the Spanish league and collecting a third defeat of the Euroleague Top 16 phase tonight. As for Real Madrid, the hosts looked cool in attack as they plundered 42 first half points while stopping Barcelona at 33. From there Los Blancos never looked back and used a big 31-20 final act to add some extra gloss to the impressive final score.

The win sent Madrid to 5-1, locked with Maccabi Tel Aviv at the top of the standings, while Barcelona slips to fourth and a 3-3 record. Sergio Rodriguez topped the winners with 23 points, while, Rudy Fernandez took 22 points and added 9 rebounds. Mario Hezonja led Barcelona with 22 points, but there was little joy to be taken from anyone on the roster after this defeat.

Galatasaray played host and pushed current Euroleague champions Maccabi Tel Aviv to the wire. However, it was not to be for the Turkish club as the champs edged the game 94-97 for an overtime win in Istanbul. The Abdi Ipecki arena was typically full and bouncing, and the fans were rewarded when Galatasaray carried a 49-44 lead into the long break. A losing second half put the score all square at the end of regulation, with the game heading into overtime with the scoreboard reading 85-85. In the added frame, Maccabi Tel Aviv edged the scoring to snatch the win. With defeat Galatasaray stays in sixth with a 2-4 record, while Tel Aviv jumps to 5-1 above Madrid with a superior head to head.

After collecting a maiden Euroleague Top 16 victory last week, Crvena Zvezda Belgrade would have been looking to build. However, the Serbian giant (flying at the moment in the Adriatic League) fell at home to a dogged Zalgiris Kaunas, 68-70. The Lithuanian visitors climbed to 2-4, while leaving Red Star rooted to the bottom of the table. James Anderson set the scoring pace for Zalgiris with 22 points, while Boban Marjanovic doubled up for Crvena Zvezda with 17 points and 10 rebounds.

Group F
CSKA Moscow was 15-0 in the Euroleague this season heading into its contest against Olympiacos in Greece. However, the elite competition in Europe proved once again that it can send you crashing to earth as easily as it can have you flying high. Of course, Olympiacos is no push over and the Greek giant downed CSKA 84-76 and even snatched the Russian clubs’ top spot in Group F (both locked at 5-1).

Vassilis Spanoulis has had an up and down season, but the playmaker set the tone for Olympiacos and was good for 19 points and 5 scoring passes. Another long time Euroleague star, Milos Teodosic, grabbed a game high 20 points and was the standout player in the losing effort.

CSKA Moscow looked to be continuing its momentum through an 11-17 winning first quarter, but Olympiacos blew hot in the second with a 32-20 act. A halftime score of 43-37 gave way to 64-53 through thirty minutes, and Olympiacos had opened enough of a gap to ride a losing fourth quarter and win the game.